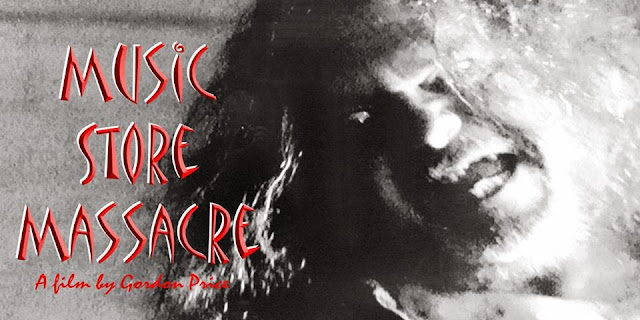 I was first contacted by Gordon Price; the writer and director of Music Store Massacre just over a year ago in order to give his film a review, I'm ashamed to say I had a bit of a meltdown with his message getting lost in The Rotting Zombie vault and so it was only recently that I rediscovered the film and actually sat down to watch it.

Detective Young (Dave Meadows) witnesses the aftermath of a brutal murder in which his partner has been killed by her priest brother in bizarre circumstances. The priest is found on a gurney with his leg self amputated and having carried out a blood tranfusion to a demonic looking guitar. Several years later after Young finds the same guitar at the scene of several murders and suicides he starts to think that the instrument is cursed and sets out to discover just what is going on. Meanwhile random people keep coming into contact with the device, and it is indeed cursed for it compels people to go out and kill and so all over town the body count rises. 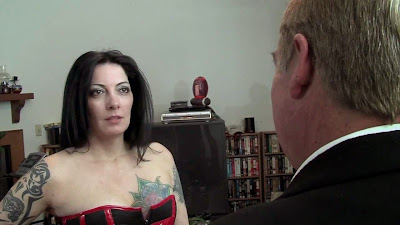 The cast of Music Store Massacre are a miserable and bitter lot, with the exception of a rare handful every single person in this film represents the worst of the worst; racists, sexists, rapists, wife beaters, extortionists, gang bangers and creeps all have prominent roles. At first I thought this was a pretty terrible idea to have such hateful people saying such nasty things but as the film plays out it becomes apparent all these people by their actions have set themselves up for a fall. The quite cool looking demonic guitar kind of hypnotises anyone bad who attempts to play it, it makes them search out hateful people and murder them, and then when there are no more victims nearby they are compelled to kill themselves. This is slowly revealed as the film progresses and the reveal that people who are pure hearted are spared by the curse was a glint of light in the darkness.

This movie is all shot in black and white but kind of like Sin City blood appears as red which works as there is plenty of blood and gore here. There is a high body count and some of the deaths are really quite fun and inventive, the titular music store massacre features death by flute, and death by oboe, later on there is a death via mobile phone, and plenty of stabbings, gun shots and even a hanging appears. All of these feature gratuous amounts of blood, I think they are meant to come across as funny for a lot of the time. The special effects are pretty terrible but fit the comedic over the top methods. 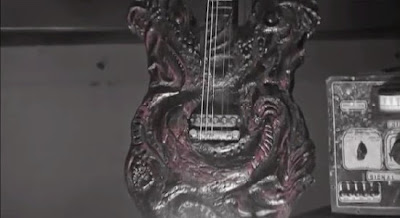 There are so many different sub plots going on that I was at times confused, characters are introduced only to be killed off a few scenes later, some of the side stories fizzle out into nothing, and the film ends before the main plot is even finished, instead we get a soppy and bizarrely positive ending involving two of the nicer side characters with the Detectives stories resolution ignored. In general the acting ranges from terrible to acceptable, I have certainly seen worse and the bad actors don't get in the way of the plot. I can't help but feel some further editing would have made this a more stream lined experiance, there is certainly some fat around the edges in this one hour forty minute piece. The film is split into various different chapters, each feature a bloody title card with a hilariously dramatic deep voice that announces each new chapter.

With such an array of nasty people it is inevitable that plenty of generic rock music would feature, that has to get a pass in a film where a satanic guitar is the focal point. As expected there is also plenty of sleazy sex and a bit of nudity, this fits the unclean world that is portrayed but why so many of the female cast are walking around in stockings and garters seemingly as a fashion choice is beyond me. In general the film looks quite rough at times, but mostly is not badly edited with some quick paced art house style sequences that can often be effective. 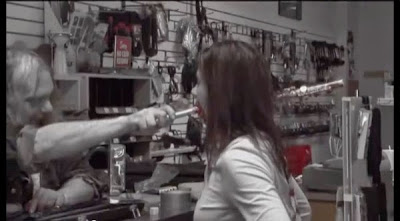 When I first sat down to watch Music Store Massacre I fully expected to have a monotonous and awful time but actually this is not as bad as all that, under all the bigotry and hate comes a pretty decent tale which actually has some revelations later on that took me slightly by surprise. I think the fact that there are pure people here, and that these people are spared being killed is a great decision, it gives hope into what could have been a far more miserable time, there is no one who dies here who does not deserve it in one way or the other, 'death to thou who hates' indeed. While it is slightly over long and rough around the edges it avoids being boring. Music Store Massacre is currently free to watch on YouTube and Pivot Share for a limited time.