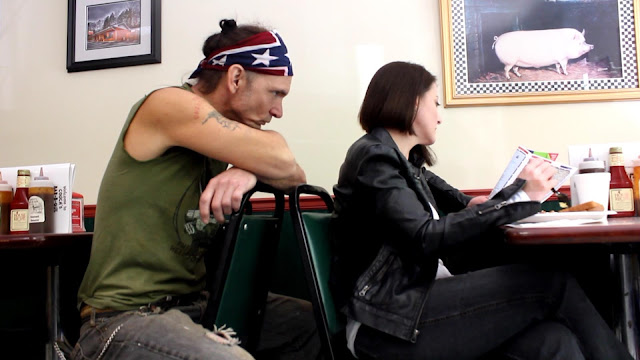 Easy Pickings is a ten minute long horror written by Michelle Gruver and Dack Guy, as well as directed by them along with Jamie Dawson as part of Dead Box Productions. I have to say I did think the title was very appropriate and playful in how it could be interpreted.

The film follows Billy the redneck; a drunken jerk who is nasty to everyone he meets. He heads to a local cafe where after hassling a mother and her two children leaves to cause trouble elsewhere. The waitress warns the mum that there is a killer on the loose who has been attacking lone drivers and that she should be wary as Billy fits the bill, but is he really the one to be afraid of?

As I often say it is not an easy task to get an entire story down in such a short amount of time, pacing can be an issue or something can end up feeling half completed. There is a definite beginning middle and end for Easy Pickings so that goal was achieved. The idea that a killer was on the loose was introduced late into the short, and the notion that this particular redneck could be the killer was hard to swallow as while he is an idiot he is not at all threatening in the way he looks. The plot in general was predictable and went exactly as I imagined it would but it was fun to see it play out regardless.

The acting was passable but the majority was pretty average, it wasn't helped by a bad sound mix, the music was fine and audible, but I did struggle with hearing the dialogue as especially in the diner scene it was quite hard to make out what people were saying, like they were talking through a tube which was a shame. The music was generic American rock but it fitted the redneck tone Easy Pickings went for.

This indie short didn't outstay it's welcome and despite some average acting and sound quality issues it was quite fun, avoiding being boring. Check it out below if you so wish.