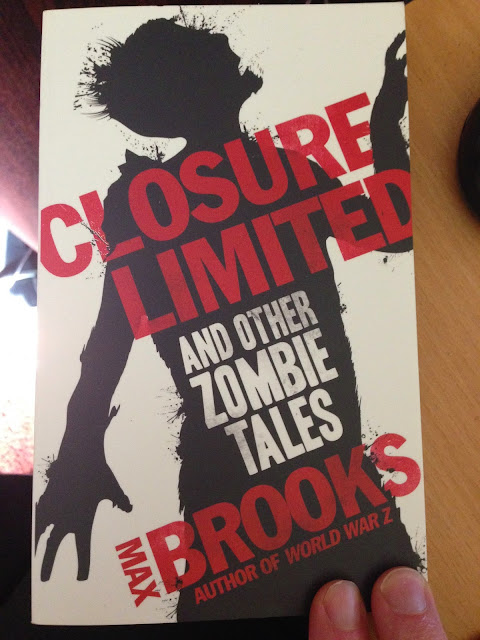 I have never particularly liked Max Brooks books, his first one The Zombie Survival Guide was entertaining up to a point but was so geared towards American audiences that I often felt alienated by the advice provided. Next up was World War Z which of course went on to becoming a high grossing film, but for the book itself I never found myself too interested in the method used of portraying zombie apocalypse from testimonies of the people who lived through it. Would Closure Limited be any better than those so-so ones?

In this slim book there are four short stories, two of which are set in the World War Z universe. First up is Closure, Limited: A Story of World War Z that follows a man in Iceland visiting a boat where people find ways to get closure for loved ones missing during the apocalypse. It was written in a similar style to the main book and so again there is just something about that whole written universe that leaves me cold, a slight air of pretentiousness to everything. The story itself doesn't really do much but has some new ideas.

The next story is titled Steve and Fred, this one is actually two unrelated stories but they meld together interestingly. The first one is pure action and has Steve; a soldier assaulting a base over run with the undead, he does crazy stunts, has cool one liners and gets the girl. The second half concerns itself with a man called Fred who is slowly going insane having been trapped in a hotel toilet due to thousands of dead outside the small room. At first I thought it was a bit strange having these two entirely unrelated tales but actually the parallels between the two characters situations was well done, probably my favourite story of the four.

The third one is called The Extinction Parade and is a recounting of mankind's extinction by zombies from the perspective of a vampire. I enjoyed this one even if it didn't feel too original (Scott Baker's Rotter World novel came out the same year and dealt with a similar subject). At times it feels a bit too silly, but also manages to be affecting and regretful in equal measures.

This compilation ends with the second World War Z short story titled The Great Wall: A Story from the Zombie War which is an interview with a woman who was put to work rebuilding the great wall of China to stop the hordes making it into a human safe zone. This was ok, nothing really exciting again.

At 124 pages this is a very small book which for the asking price of £5.99 is a bit steep I felt, I'm sure you can find it for cheaper now. Even without the price I just never really got gripped by any of the stories here, they were ok to read but certainly nothing that is going to stick around in my mind for too long.

Posted by Daniel Simmonds at 08:17