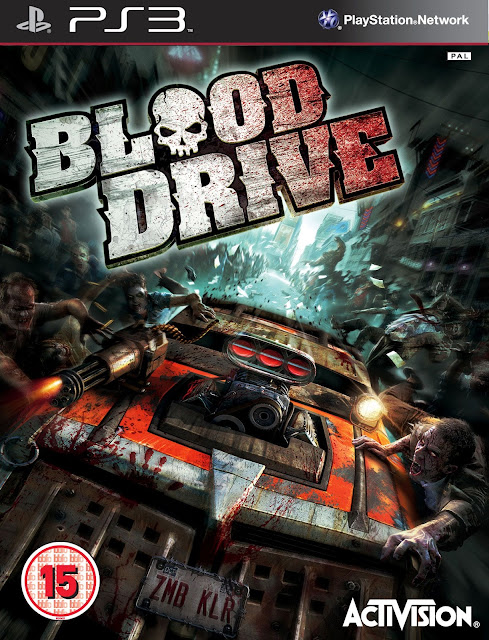 Blood Drive is a vehicle arena racer/shooter in the vein of Twisted Metal, the big difference and what drew me to it is that each of the arenas you battle in are full of the rotting undead as well as other combatants.

The game takes place in post zombie apocalypse America, a new sport has emerged in this new world; 'Blood Drive' where people fight for fame and glory. The latest Blood Drive championship is taking place at Las Ruletas where there are six arenas in which the six people of various backgrounds fight for the cup. 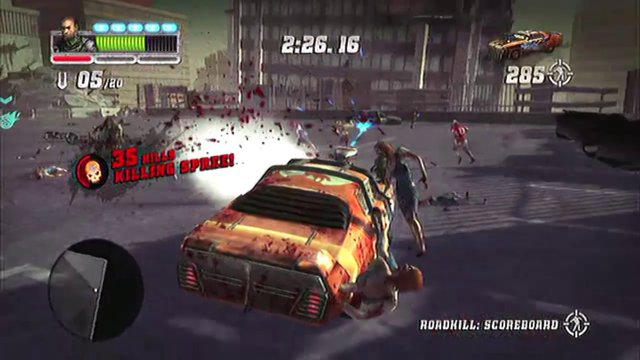 This was released as a budget title and it is clear to see from the average graphics and dull generic American rock music that it doesn't do much to hide the fact. Depending on what cup you choose there are a variety of different challenges to win at. Each new cup is unlocked after the previous one has been beaten. It starts off with just a few rounds but by the time you unlock the final cups there are thirty rounds to get through, with no way to save you are expected to do it all in one play through which for a thirty round cup is I would guess around two hours, and two dull hours at that.

I think there is something like six different types of round in the game. The race based ones include a straight up race where every thirty seconds the person in last place is eliminated, and one where you have to get through the most check points. Other modes require you to kill the most zombies, kill the most of everything (zombies and fellow drivers) with the final two rounds being keeping hold of a gold skull the longest and killing zombies but with the lowest scorer being eliminated every thirty seconds. None of these are particularly fun, the zombie killing ones are the best due to the simple fact that the car controls can be pretty loose and so manoeuvring your vehicle through the petty checkpoints which require you to pass them with perfect accuracy is an unpleasant and frustrating mission. 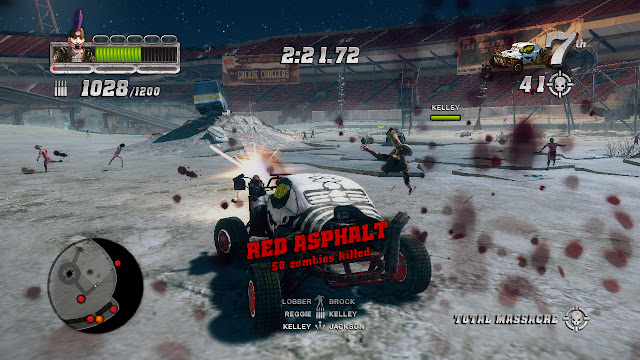 There are eight characters to choose from but despite seeming to have a lot of back story for each one there isn't really an easy way to find it out, you get information on loading screens, and vague things the characters themselves say but other than that there is nothing which makes it a shame. I played through the game as Jackson who seems to be based on Mad Max, other combatants include Reggie who drives an ambulance, and a few other potentially interesting people. There are six arenas to play though, some better designed than others. These include an airport, a stadium, factory, town, car park and casino, more choice would have been better.

The zombies themselves are plentiful but the game features some bad pop up, all of the undead can be mown down quite easily apart from the super zombies which have been stolen straight from Left 4 Dead and include leaping ones, tank ones, and fat poison ones who explode when hit. Not only can you car destroy these but there are a variety of weapons you can collect to destroy them with such as grenade launcher, rail gun and mines. Each character also has a special ability, such as Jackson who has a shock wave effect that kills everything around him. 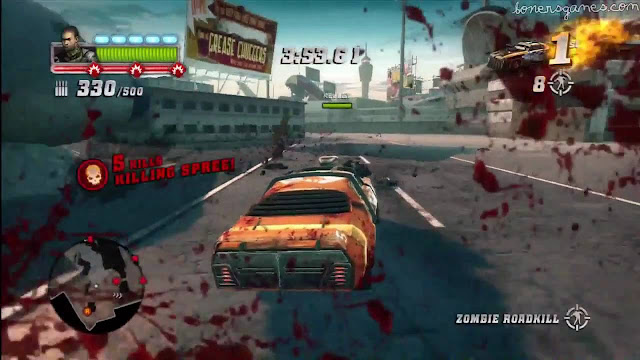 The only option to play the game is cups, even the option to do a single race has to be unlocked. Multiplayer is also an option, I didn't actually try this mode myself. With dodgy controls, a lack of aim and some far too long cups it is really hard to recommend this, even if you love zombies. All I can really say in the positive is that least the presentation is well done with announcers talking in between matches and some cohesive design choices.

Posted by Daniel Simmonds at 08:43