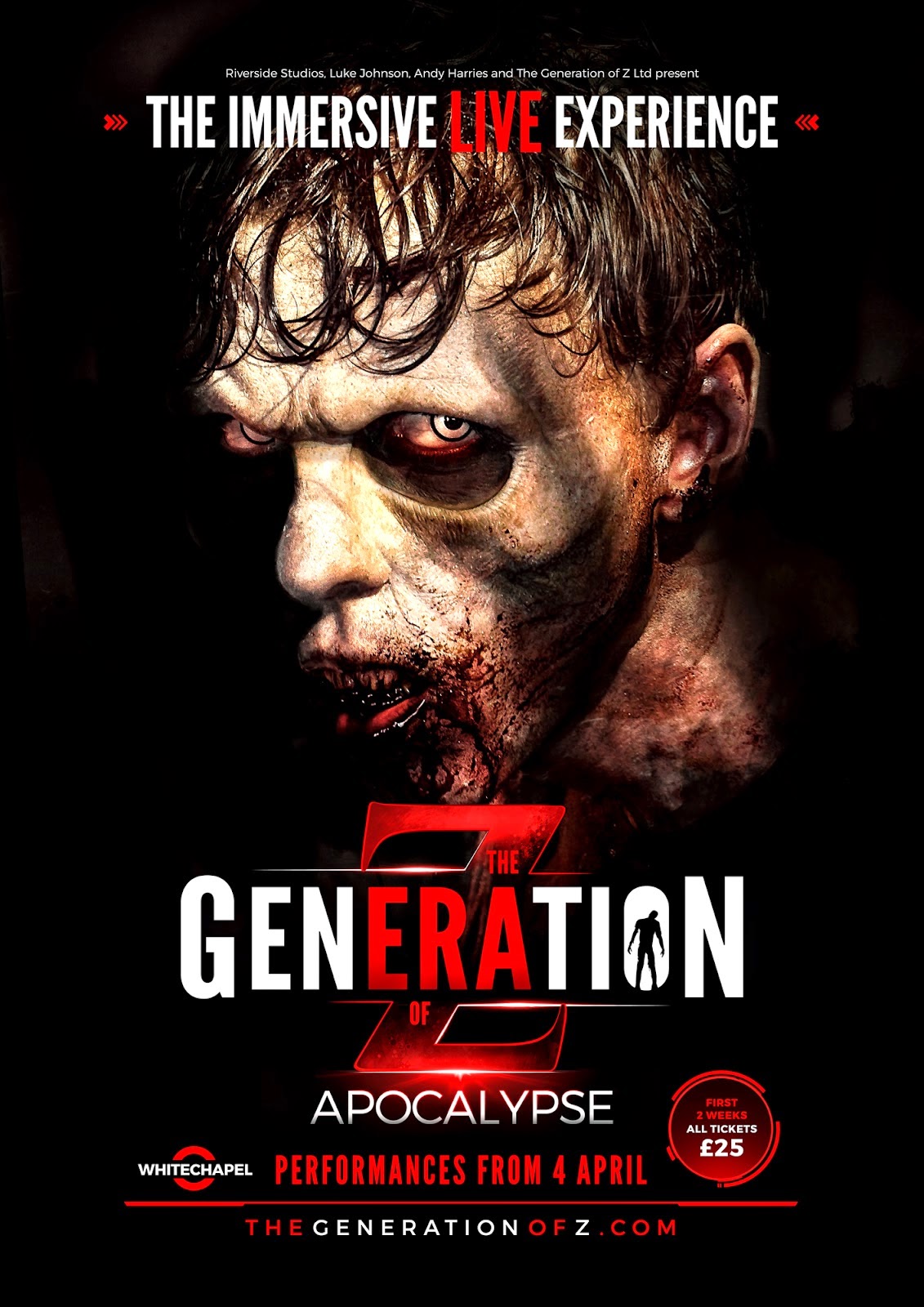 On Tuesday night myself and my assistant were invited down to London to experience The Generation of Z: Apocalypse event that I mentioned in February. It is basically like a theatre production but one in which the crowd themselves are involved. It takes place in a purpose built underground bunker and features plenty of zombies and mayhem. There will be spoilers about the actual plot but I will try and cloak them in mystery as best as possible.

First off and for someone who does not go to London often the actual building the event takes place in was really not difficult to find being a brief walk from a tube station. I went to the eight thirty showing which was fully booked and so there were plenty of people around including You Tube stars Caspar Lee and Joe Sugg (if their names mean anything to you). It all starts with everyone being brought down stairs into the basement.

With the slam of a gate a group of five soldiers entered the room shouting at everyone to get back and waving their guns around. The leader told the crowd that zombie apocalypse has swept London and there is nowhere safe anymore. The location we were in was a processing facility, designed to process survivors so that they can be taken away to safety but from the looks of things the base was no longer safe. It's not long before a man turns up coughing up blood before going on to attack two girls, all three swiftly being killed by gun fire. The guns fired blanks but were super loud and it was quite thrilling to see the actors get shot as they reacted well. After more talking between the soldiers and after they had checked us all out for any signs of infection a horde of zombies appeared behind the wire fence, first a couple, then more and more, by the time we were hurriedly led out the room there must have been around thirty fully made up zombies clawing at the fence and moaning, was a buzz to see so many of them. 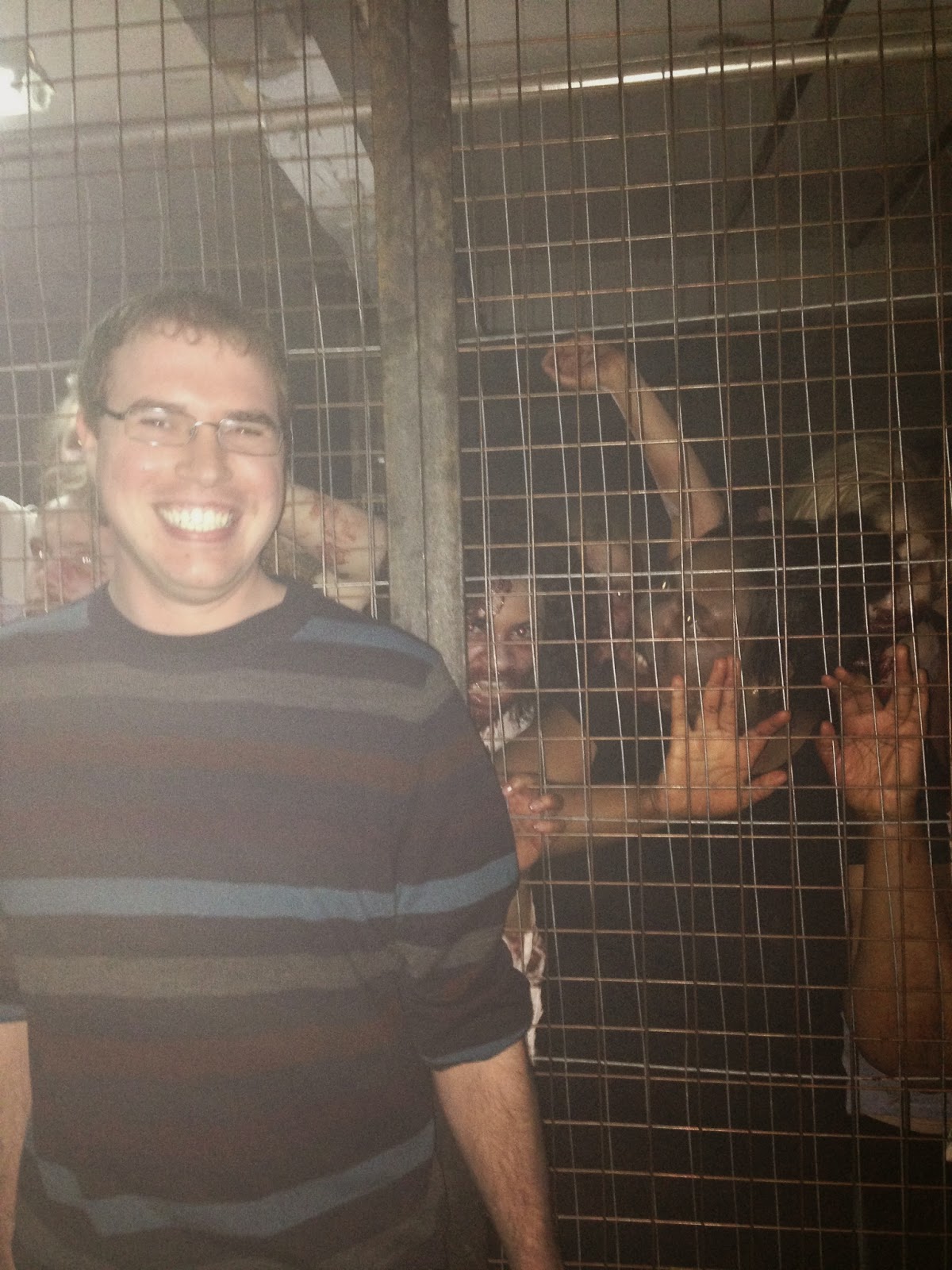 The blurb for the event said there would be choices you got to made which would shape the experience but the biggest of these wasn't really a free choice as the large group got split into two with half led down one corridor and the other down a different one. My group went with the comedy soldier (who was called Moose I think) as well as a female soldier and a rookie and went to a waiting area with several zombies dispatched en route. Throughout the whole event there was a lot of humour, I don't know if that was because we were with the joker character or if the other group also got as much laughter. In this room there was a lot more story told which led into one of the characters getting a stomach injury. For the stomach wound there was plenty of fake blood used which looked pretty cool and people from the group were invited to get involved, some leaning against doors to hold them shut from attacking zombies while a poor girl got the job of putting pressure on the soldiers wound which resulted in her hands becoming crimson red!

After this room the group were then split in half again so there were now four different story lines playing out which I have to say is a great incentive to visit again, though I did also find myself wondering what was going on elsewhere and if the story I was following was the best one or not. Our now much smaller group followed Moose into a room containing a jail cell where a man was locked up in, Two screens built onto the wall showed camera footage of the other groups rooms (which seemed to be an infirmary, a command room and another one I can't recall). An intercom by the screens let the soldiers talk to each other while every now and again you would hear the other groups stories play out via radio chatter. Before leaving this room someones throat got slit resulting in a lot of convulsing and blood. When you have a man bleeding out on the floor right by you it does help make it all seem more real than if it was someone up on a stage. The only real decision of the night was provided here but it didn't seem to make much difference as despite the majority of the group deciding one thing a vocal minority made it so the actual decision made was different and when we were later blamed for the results of that decision we didn't really make it seemed a bit off.

At this point I have to point out how impressive the acting was throughout, there was not a single bad actor, and even the zombies seemed real and didn't seem to ever fall out of character. The man who played the leader; Sarge was the best of the bunch, when he was ordering his men (and women) around he seemed very authentic, not just in the way he spoke but his actual physical acting. The other soldiers were also all good with Moose being a great one constantly making jokes and interacting with the audience. Meanwhile other characters also did solid performances such as the actor playing a prisoner and several plants in the audience who kept popping up all the way to the end really helped make things seem more real than they were. Now I didn't have any characters really talk to me directly but my assistant did on several occasions and said afterwards that they seemed really believable.

Things soon took a turn for the exciting when a self destruct sequence got initiated. With the TV monitors displaying warnings, red lights flashing and an automated voice calmly saying there were ten minutes before the facility was destroyed I really felt like I was in Resident Evil or any number of horror videogames, it was a pretty awesome feeling! We were told before hand there was to be no running, and that is a perfectly acceptable health and safety rule but with just ten minutes to escape us all slowly walking down corridors was a bit immersion breaking, on several occasions when zombies were hot on our heels it was a bit of a minor distraction that everyone was walking so calmly rather than charging head long (which is what I would have done were it real). That said by the end people did charge off (including my loyal assistant; thanks for that!) leaving me at the back feeling very vulnerable. 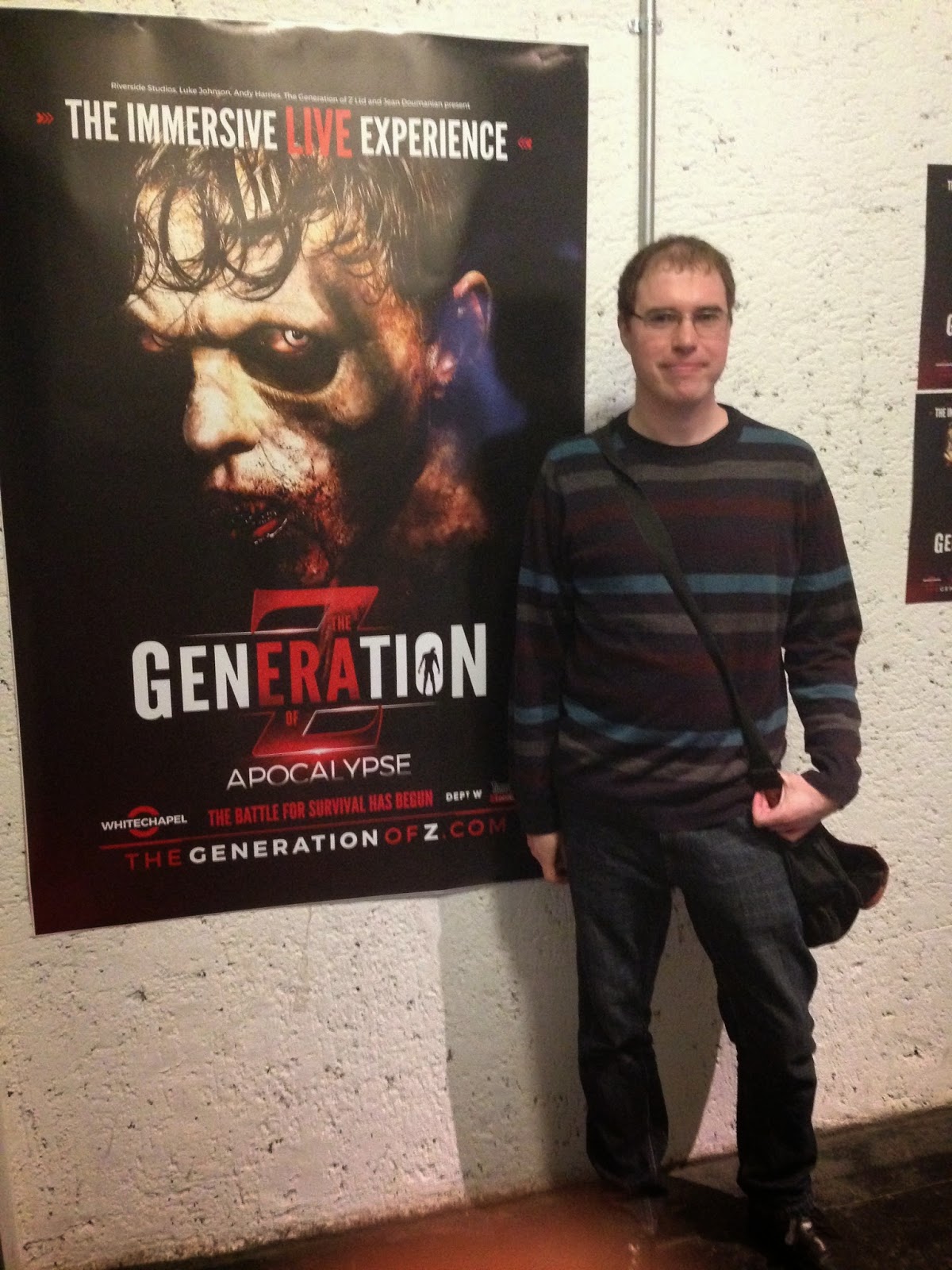 After a couple more rooms the plot was pretty much over with, the end was a taut walk down a series of narrow corridors that had plenty of mesh fences that hordes of zombies were behind, when one of the zombies made a sudden impressive attempt to launch itself over the top of one of the fences I let out a small yelp I have to admit. This part of the experience was a load of fun, it felt like I was in a car-less ghost train. Finally we make it to a large room, the one we started in, zombies were spaced out in a zig zag pattern and we walked through the middle. The zombies did not move from their spots but they did growl and claw at us and I ended up leaping in fright from one to the other all up the room in a pinball fashion which was very funny.

With the event over it was time to get some pictures with the zombies and grab a drink. A few brief highlights I forgot to mention elsewhere include a zombie death by chainsaw which featured a lot of blood spraying everywhere, and a zombie that got loose in the audience moments before all the lights suddenly went out leaving everyone in pitch black panic.

So The Generation of Z: Apocalypse event for me was a huge success. It was cool to see zombies in real life as it were. I wish I could say it was frightening but it really wasn't, as much as I tried I could not take what happens seriously as I never felt completely immersed which is no fault to the many great actors. While I did feel like I was missing out on other story lines the groups splitting up was a good idea and gives incentive to go back and watch it all again. My assistant found the lack of any real choice to be slightly disappointing, she also thought the plot was a bit simple but for me the simpler the plot the better when it comes to the zombie genre. Also what has to be mentioned is the ticket price which is pretty expensive with tickets ranging from £27.50 to £42.50 depending on when you go.

With great zombie make up, some decent acting, fun special effects and a great location I would happily recommend this event to anyone, provided they can afford the ticket of course! When it comes to the price though there really is not much else out there that is like this, I think if you love zombies and this sounds like it would be something you would like then you would certainly get huge enjoyment out of it, in fact even if you don't like zombies then I would still say to go. Tickets can be purchased from here and the show itself runs up to 5th July 2015 with several performances a day, highly recommended.