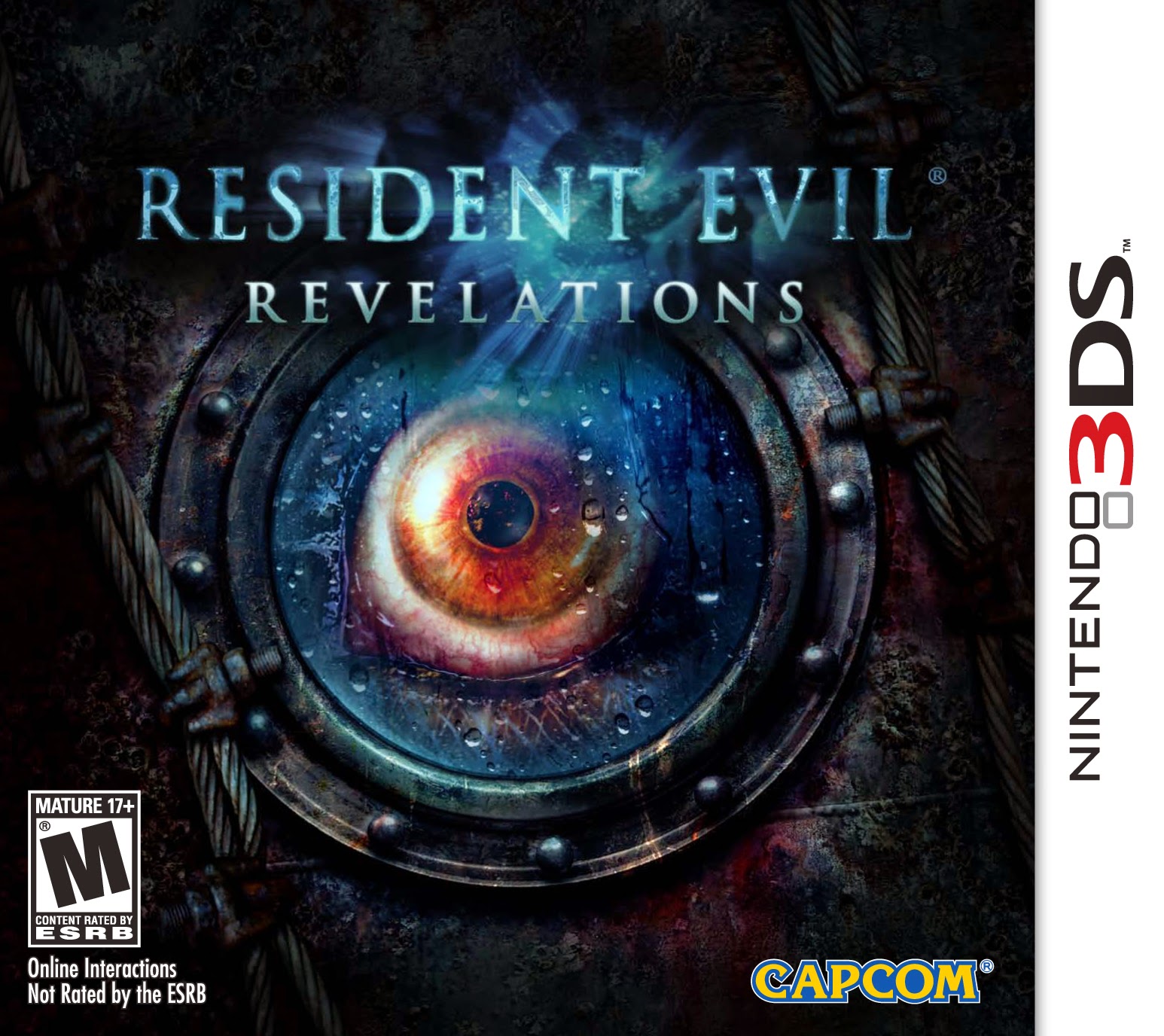 Many saw Resident Evil: Revelations as a return to form for the iconic horror series that has lost its way recently with convoluted plot lines and an increasing focus on action. Originally released on the Nintendo 3DS it was later upgraded to HD and released on consoles. The version I am reviewing is not only the original hand held version, but also played without the circle pad pro meaning I only had the one analogue stick. That fact is important as it does factor into my overall enjoyment of the game.

The story (set between Resident Evil 4 and Resident Evil 5) is unfortunately quite a mess though true to the games name it does hold some revelations. From what I could piece together one year after an organisation called Veltro destroyed a pretentious floating city in a biological terrorist attack Jill Valentine and her partner Parker are sent by the B.S.A.A (Bioterrorism Security Assessment Alliance) to investigate a ship in search of Chris Redfield and his partner Jessica who went missing while investigating claims that Veltro were back in action. 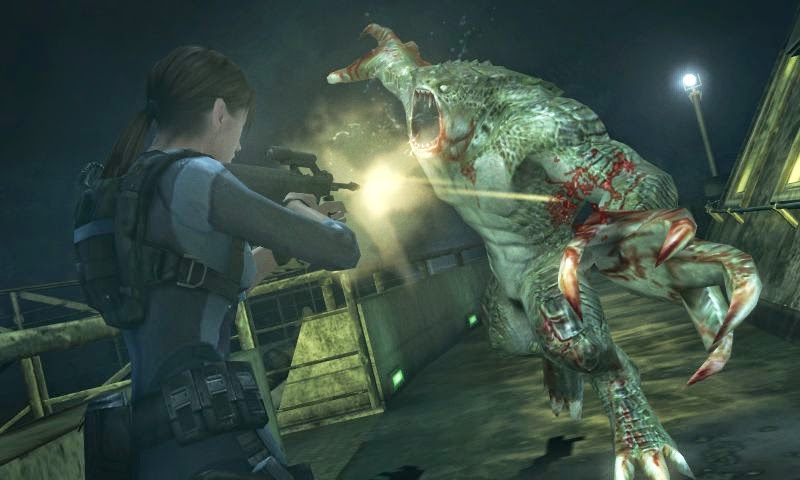 Revelations takes place over twelve chapters, each one of which is usually split into two or three smaller sections. These bite size chunks work well on a handheld, while the various locations and character swaps theoretically keep things feeling fresh. Each chapter ends on a cliff hanger and begins with a recap montage feeling like a TV episode.  My first complaint though is the fact that for around 90% of the game you are exploring with an A.I partner in tow. The A.I is inoffensive, not requiring healing, and has infinite bullets but just by their presence a lot of the fear that had the potential to be there is gone.

The characters of Jill and Chris are the same as they ever where but I took more complaints with the newer ones. Most chapters see you flipping between various duos, Jill's gruff partner Parker is fine enough, but Chris's partner Jessica looks ridiculous in an outfit that is just not practical seeming almost half naked for no good reason at all. Even worse at some points in the game you get to play as one half of a comedy duo. Two idiots making bad jokes and getting into 'zany' situations does not fit right with a horror game, the segments featuring these guys did admittedly break up some of the histrionics but did not stop them from feeling really out of place. 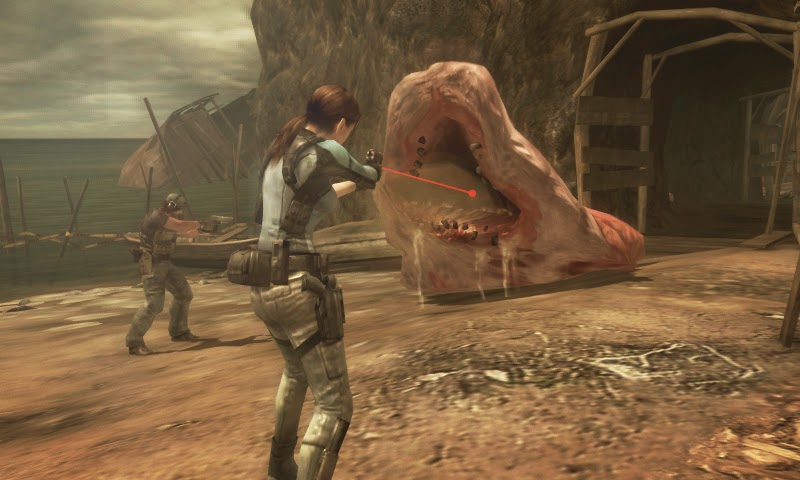 Revelations does not stick to survival horror despite a strong start with Jill alone exploring the mysterious Queen Zenobia. In general Jill's levels are more traditional while Chris's levels are far more action centred and the other characters (such as Parker's flash back levels) are even more like straight up action. The controls do not work well for action though, the missing analogue stick was keenly felt with a stodgy camera meaning I often got attacked by creatures I could not see, or turn quickly enough with the tank controls to fend off threats. When you want to attack an enemy you go into a first person perspective which makes for an easier time at shooting but means you can't move. You also have access to a device that lets you scan the environment for hidden items and scan enemies to gain extra healing items but this is fiddly to use and means your gun is not quick to hand.

There are no zombies at all to be found here, instead the main enemy type is some sort of humanoid leech creatures that latch onto you with their jaws, or fire organic projectiles at you. These creatures are meant to have once been humans so I guess they are vaguely zombie like. Returning favourites include monster dogs and the threatening lizard monsters; Hunters who also turn up later on as invisible enemies. There are quite a few bosses to fight none of which are that hard, but most of them are passable, some enjoyable ones where you are operating a gatling gun, and the end boss itself I did find an enjoyable battle as it felt quite low key and old school. To fight all these you get the usual assortment of guns, three of which can be carried at any one time, and it is easy to switch between these weapons. 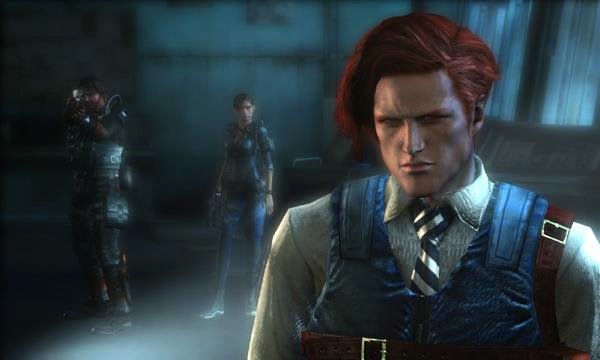 The reduced graphical fidelity of the 3DS means the game looks kinda Resident Evil lite at times, enemies dissolve when killed to save on memory and locations in general are not too detailed. The adventure mainly takes place on board the huge Queen Zenobia ship that features a variety of different places, but you also get to go to a pretentious floating city as well as the snowy mountainous wastes where a Veltro facility is located. While the graphics are not the best the same can't be said for the many, many cut scenes that all look decent, and the music is not bad,  it is just a shame that the plot is a giant convoluted mess that makes little sense

I did enjoy Revelations but at the same time I have to say it is not a fantastic game, merely an adequate one that just manages to stay on the right side of interesting. At around 8 hours long there is value to be had here also even if a lot of locations are revisited time and time again. If you are playing this with two analogue sticks then add on another zombie head to my score.