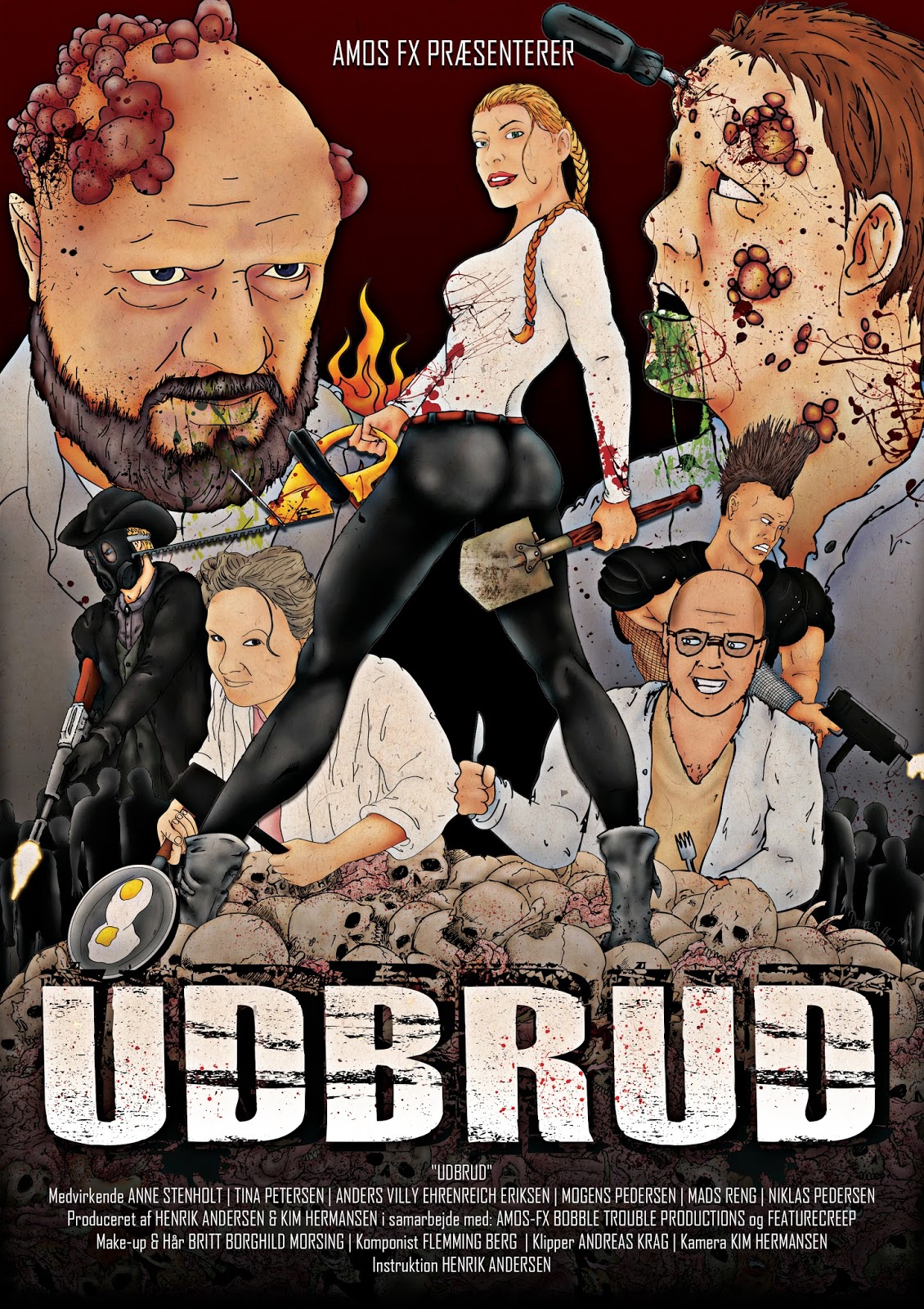 Outburst (or Udbrud as it is called in Danish) is a short forty minute zombie film directed by Henrik Anderson, It was made as homage to the exploitation films of the 1970's and 80's and features plenty of gore.

A young woman is having breakfast with her Mum and Dad when she gets caught up in a zombie outbreak, escaping out onto the street things are even worse and so she makes her escape on foot, and then later on by car. With pustule covered undead apparently everywhere is there really any place to escape to? 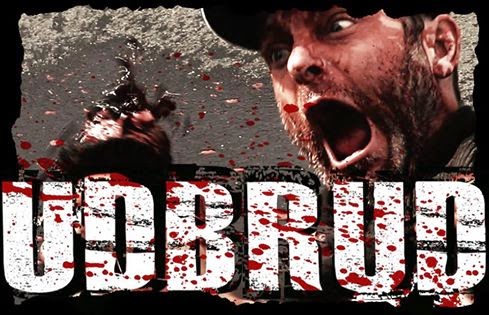 The film is in Danish with English subtitles available but with the exception of a voice over at the very start of Outburst there is no dialogue at all. The nameless girl not once uttering a single word, nor the undead around her. I can see why it was done this way as there would be not much reason for someone on their own to talk in the first place, but it also helps make the film appeal more to an international audience. The voice over gives an overview of such stating about the population growth the world has experienced in the last couple of hundred years and how in the middle ages population growth was naturally tempered by the outbreak of epidemics. It also throws some analogies about how people exist only to eat nowadays which of course can be contrasted with the zombies who also seem to appear just to eat.

Outburst reminded me a lot of Peter Jackson's early films Brain Dead and Bad Taste in that humour is mixed in with over the top violence and lashings of blood and guts. The director has stated that the biggest influences were Dario Argento and Lucio Fulci and these influences are obvious to see Nowadays it is the curse of film makers, especially ones making low budget films to rely on CGI for the effects. Here this is not the case (apart from some gunfire later on). People get their stomachs ripped open and insides pulled out, throats get slashed and heads destroyed, even an eye ball gets pulled out all in glorious practical effects that look at the same time unrealistic but also awesome. There is a lot of blood sprayed out from missing limbs and cut arteries, frequently the floor is awash with blood and this gore is focused on with even the camera lens getting sprayed at various times.

The humour is quite surreal and weird and comes at fits and bursts. A squirrel waving hello to some kids, a woman's compulsion to squeeze a boil on her husbands head and some over the top deaths leads to some bizarre and gross humour that made me feel quite queasy at times.

Zombies do not need a lot of make up to become effective foes but here they get a really unique look. The zombies are all covered in pustules, some of them have most of their faces obscured by large white lumps, this could not help but remind me of the ghouls you battle in The Last of Us. I was impressed with the make up of the zombies for sure, though it was inconsistent at times with it being really obvious that some were treated to contact lenses which really completed the look, while others had no such things and stood out more for having normal looking eyes. 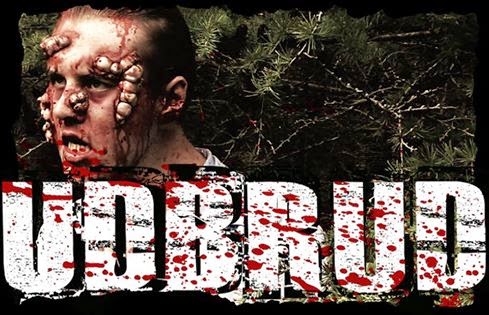 My other complaint is a bit of a double edged one. There are plenty of child zombies in Outburst, and it is really quite funny how a serene fairytale neighbourhood transforms so rapidly into utter chaos. Children never feature enough in the average zombie film so I am not complaining about that. It is just a shame a lot of the children are (understandably) having a fun time and don't hide that on their beaming faces when they are meant to be the ravenous undead.

The plot is a bit all over the place and goes to some strange places seeming to skip genres at one point. This often feels more like a concept piece than an actual film and the final scene leaves the zombie genre altogether and heads into the post apocalypse genre feeling like something straight out of Mad Max (which was very intentional). Characters of all types dressed in ridiculous get up such as gas masks, jewelled eye patches and guy liner. Quite a cool action sequence entirely takes place in cartoon form which was a neat way to approach that particular bit. 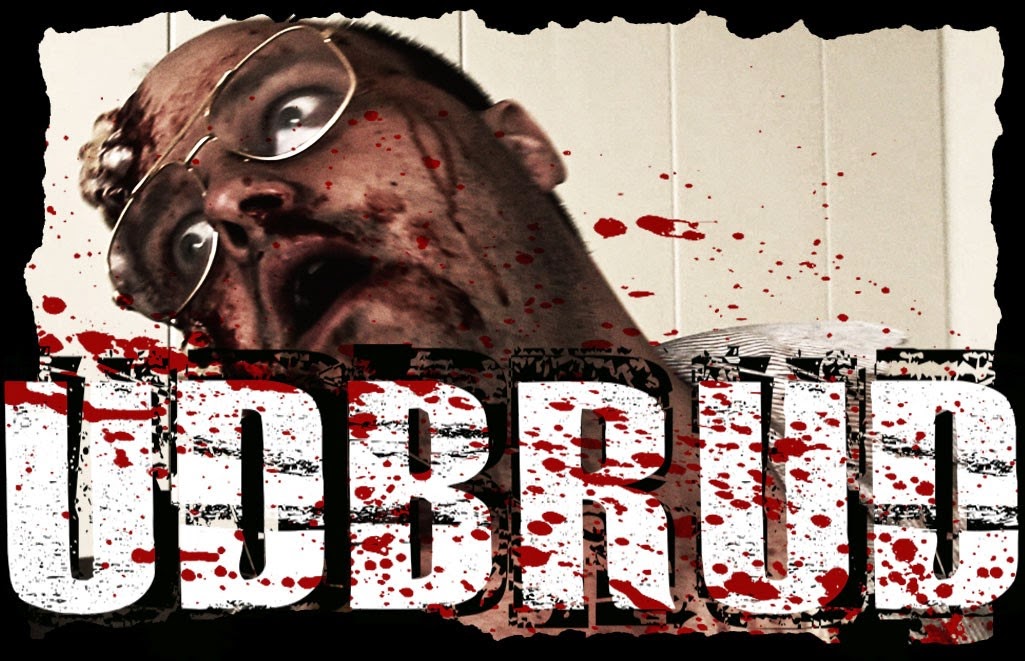 All in all I did enjoy Outburst and I really liked the physical special effects used, gave me a twinge of nostalgia as for the most part films like this are just not made any more. A more tighter plot and a finale that didn't feel like it was taken from a different film and this would have been essential viewing. As it is I do think it is worth a watch if you have more than a passing interest in zombies.

Posted by Daniel Simmonds at 02:44