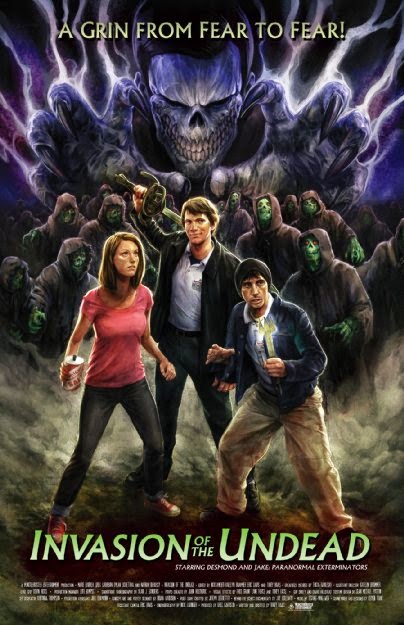 Invasion of the Undead is an indie horror comedy that was filmed on a budget of $17,000 and was made based on similar films of the 1980's. It wears its influences on it's sleeve giving at once a familiar feeling while also feeling modern.

When Allison Hillstead (Marie Barker) discovers a zombie in her bathroom she doesn't quite know what to do, that is until a passing girl scout gives her the business card of a duo of paranormal exterminators. However the two exterminators; nerdy Jake and his best friend; cocky Desmond (Greg Garrison) are quite new at their business and soon find themselves in over their heads when a literal army of the undead appears. It turns out the ghouls are under the command of the deadly Guy Smiley who has links to the demon realm and has set in motion plans to take over the world. 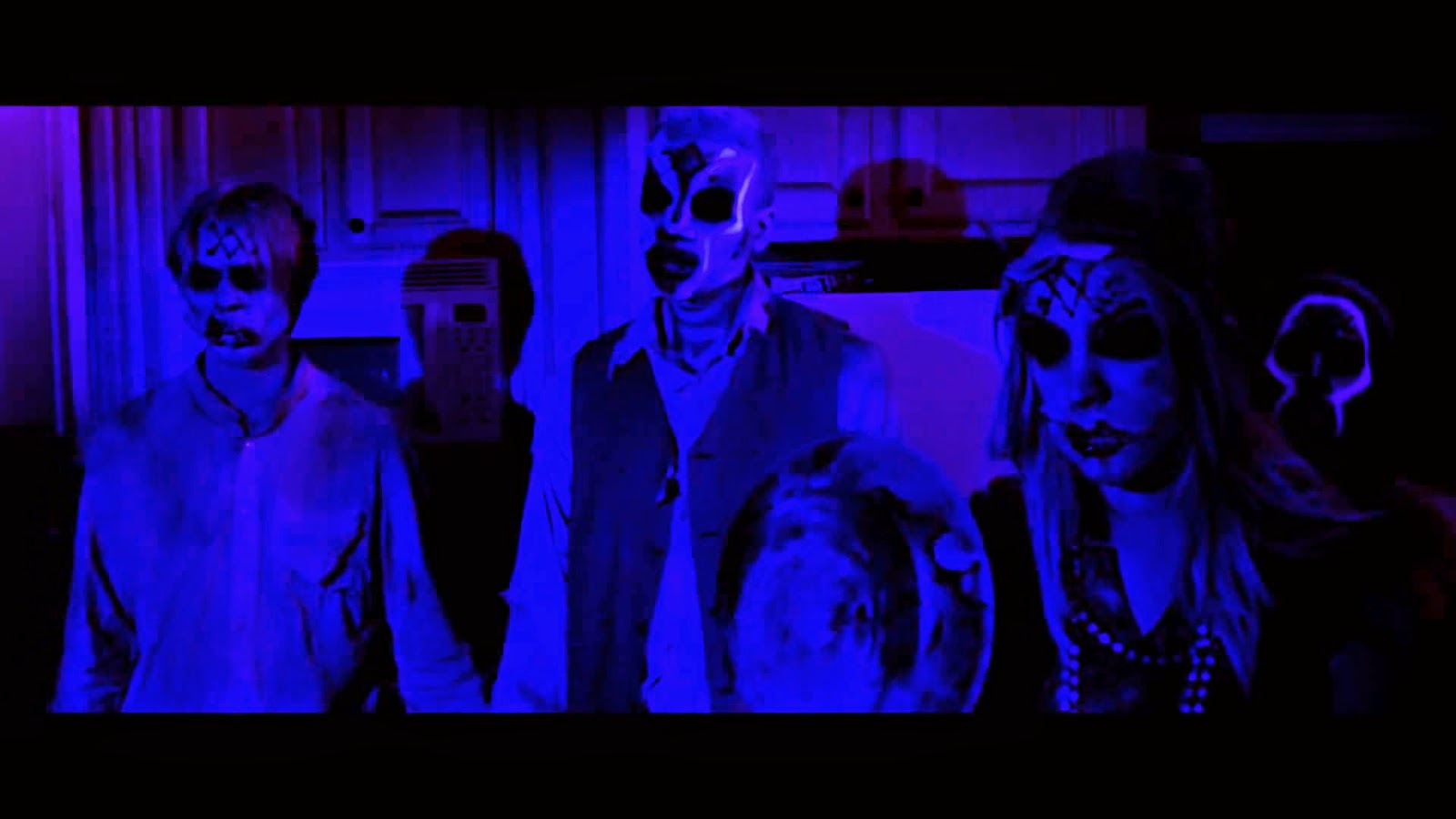 At first I worried that the humour would be too overbearing and take the focus off the plot, my concerns soon faded as after a bizarre start the comedy faded into the background. It is still there constantly but it never gets in the way and for the most part works in the context it is used in. The main actors Barker and Garrison are both attractive leads and also quite likable, The character Desmond in particular was someone it was easy to root for as he came off like a young Han Solo portraying the loveable rogue type, heroic, but doesn't use his head enough. The same can't be said for his bookish partner Jake who pretty much only uses his head.

Before I carry on I have to talk about the amazing zombies, ones which really have a completely unique look for the zombie genre. The first sighting of a zombie was not impressive, it looked very fake and weird looking but I soon came to realise this was a planned style. The zombies remind me of something you would see on a ghost train ride at a tacky fairground, they have weird angular heads and bright red lights for eyes and all of them appear to be decked in day-glo make-up like something from a Mexican Day of the Dead celebration, or the gang from the alley scene in Batman Forever. Main zombie Guy Smiley has the best design featuring as he does a gigantic grin covering his whole face that glows bright blue or red depending on his mood. Again with the references but The Mighty Boosh also sprang to mind with the kinda tacky effects but at the same time oddly sinister. Time and time again I was just hypnotised by the special look, it really saved the film for me as traditional zombies and I don't think I would have enjoyed this as much.

The plot is simple enough but it has some classy ways to advance the story. Some flashbacks to a hundred years past really look the part, while the brief looks at the demon dimension feel quite trippy. Best of all later on there is a fight with a stop motion creature that looks fantastic in that jerky movement way of the style. There is minimal cast but they do an adequate job, the acting is not the best I have ever seen but it is certainly the right side of average. The humour works also which is a plus, I did laugh out loud at a couple of points mostly concerning the disembodied talking head that Allison ends up carrying around with her. Kudos must also be brought to the great soundtrack that worked fantastically in tune with the visuals.

On the horror side of things Invasion of the Undead is not a scary film in the slightest feeling like more of an action piece but echoing the more child friendly horrors of the 80's despite some occasional strong language (thankfully no shoe-horned in female nudity here). It has some strong connections to videogames which pop up throughout; the zombies brightly flash when attacked, with one boss type one flashing red repeatedly when nearly defeated. The boss style battles even have title cards for the two fighters while a sword fight sees one sword glowing halogen blue and the other one glowing halogen red (echoes of Scott Pilgrim VS. the World). 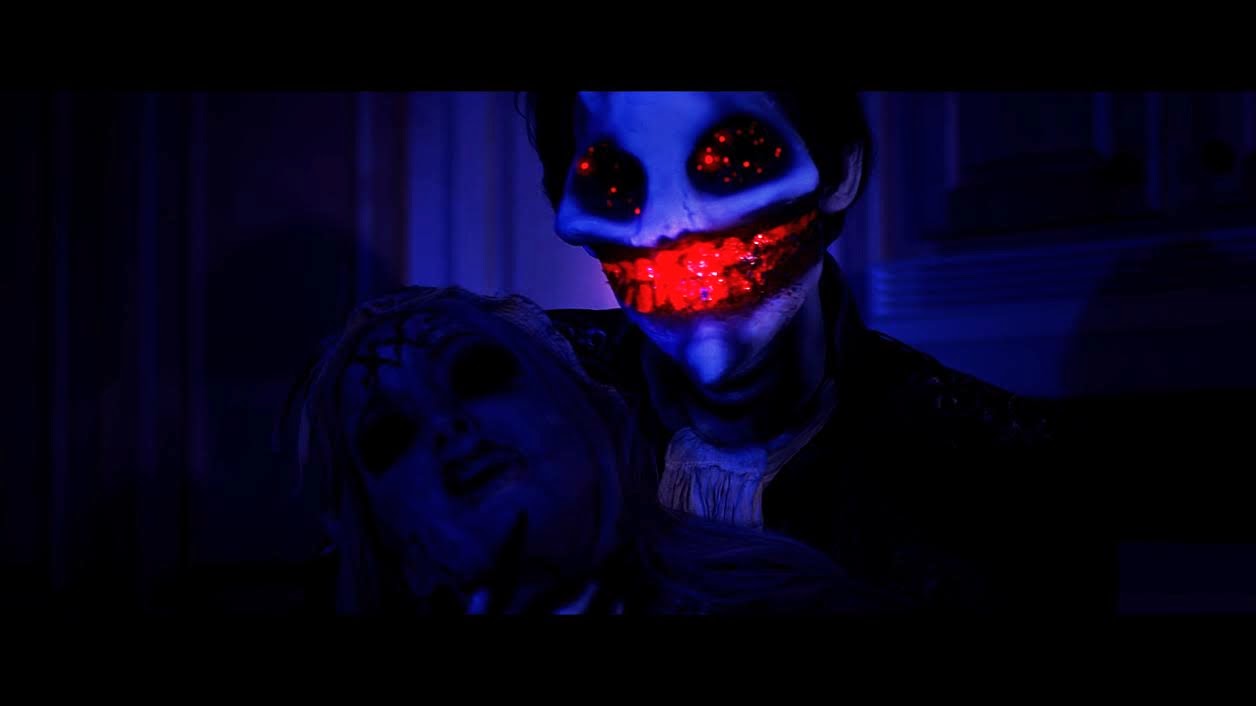 Some of the blood effects are quite terrible with cuts seeming like they are just painted on but elsewhere the special effects really do shine, such as Jake who just looks fantastic by the films end (his role reminded me a lot of a similar character in Lollipop Chainsaw). At times Invasion of the Undead verges on the precipice of outstaying it's welcome even at it's 80 minutes run time but it just manages to cling on in my opinion. It is refreshing to get characters who you can actually like

The combination of traditional movie monsters merged with electronic lights and glow in the dark make-up creates something that feels really quite modern (such as for once great use of CGI) yet hanging on to the beloved sensibilities of the time when horrors didn't need to be grim, they could just be fun throwaway escapism. Sure it may call to mind a whole host of other media but it has enough ideas to stand on its own. Invasion of the Undead is available to rent or to buy on Vimeo.

Posted by Daniel Simmonds at 08:52