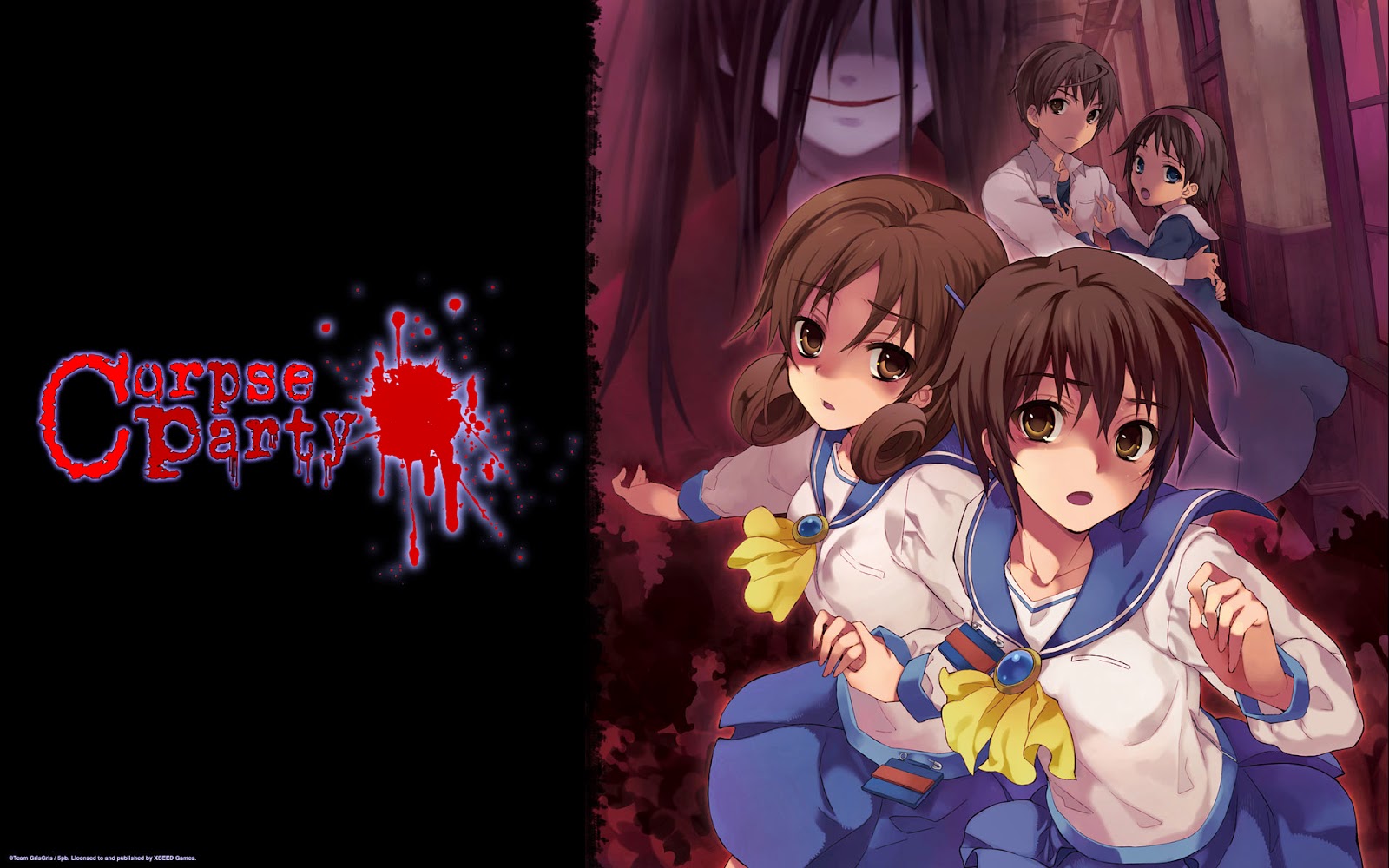 Corpse Party is a strange beast of a game. Originally released on the PC in 1996 the version I played for review was the remastered PSP version that came out in 2011 and featured a host of new content.

A group of teenage friends and their teacher have stayed late at school to help clean up after a festival. They decide to perform a friendship ritual named "Sachiko Ever After" which would ensure they would always be friends no matter what happened in their lives. Shortly after this ritual is performed however there is a sudden earthquake and the friends and their teacher all fall unconscious. They wake up to discover they have not only all been separated from each other but the school they now find they are in is very different to their one. In this dilapidated school lay countless corpses of students from various locations, it seems they have been transported to a hellish dimension where they are destined to roam the inescapable corridors and classrooms until they die of thirst and hunger, get murdered by the angry spirits haunting the place, or get possessed and kill themselves or each other... 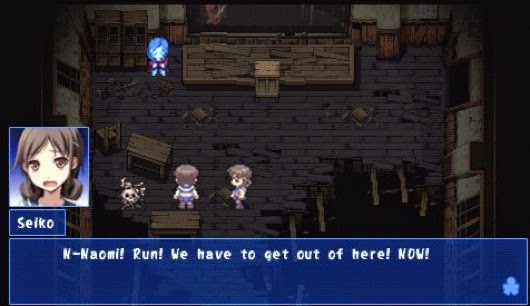 Corpse Party was made using the popular RPG Maker program and it really shows as it has the most basic of graphics you can imagine. The game looks like an RPG of the 16 Bit generation and so you would imagine it would not be scary at all, yet this is a disturbing piece that really goes to some messed up places. This is barely a game and at times feels like an interactive novel, it is very linear and there is only really one right path through each of the games five chapters. There is no combat to speak of and barely anything else that requires any skill, a few switches to press, some key decisions to make that affect if you see one of the many bad endings or make it to chapters end, and a few ghosts to avoid but other than that it is all doing specific things to trigger the next plot beat.

There is lots of talking in this game, and it is all fully voiced but unless you are fluent in Japanese this will be lost on you. It is skippable, but not quickly enough for my liking. All I can say about the voice acting is that characters seem emotional and there are lots and lots of blood curdling screams of pain and anguish as well as plenty of creepy voices saying some horrific things. Key characters commit suicide, murder and die in horrible ways. Each chapter has a variety of 'wrong ends' which usually involves a graphic death scene described. These include someone whose tongue gets cut out their mouth, being buried alive, being stabbed to death with a pair of scissors and many other brutal demises. The text is very well written and more than makes up for not understanding the language being spoken. Never before in a game has merely reading text on a screen made me feel so disturbed and creeped out! 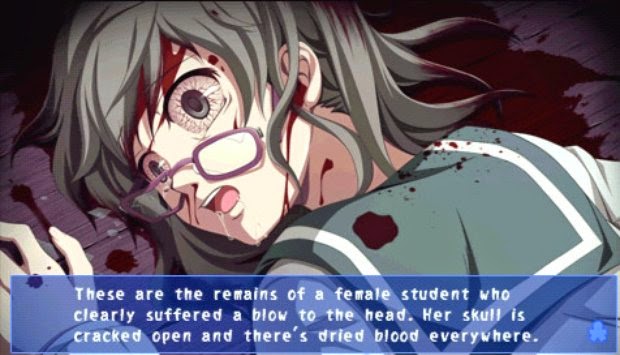 Each chapter sees you controlling a different set of students, all who are separated into alternate dimensions so that while they can't see each other they can see the results of other characters actions, so if a character dies in one dimension the corpse can be seen in other ones. The setting of the Heavenly Host Elementary School is a really quite scary one. Anyone who dies in the place suffers the pain of the method of their death for eternity. The hundreds of bodies scattered around the school all have I.D cards that give details on the name and school of the body as well as their method of death which builds up a picture that this place is a nightmare world.

For a game with so little actual game to it it falls onto the story to keep the player engaged, luckily this is a fantastic story mostly focused on a deranged teacher who kidnapped and killed students back in the 1970's. The initial few chapters deal with the students trying to cope and understand what has happened to them with the first three chapters all roughly forty five minutes in length. It is chapter four when the main plot comes into focus and all ramps up to the final chapter which took me around two and a half hours to complete. In this time you get to play as all nine of the cast and see things from their particular viewpoints and experience many powerful plot twists and cliff hangers. For me the Japanese sounding names really confused me as to who was who not helped by the fact that the pixelated look meant that the girl characters all looked kinda similar. The highlight was playing as a little girl looking for her big brother, her vulnerability is really made to feel real and you can't help but feel fear for her safety. 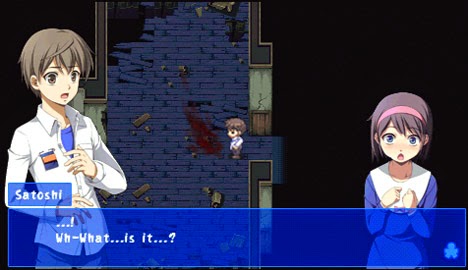 Some parts of the game were a bit too Japanse in feel and left me feeling quite alienated. Early on a character keeps going on about her backside being itchy which was a really weird thing, while a later scene that is a flashback to an earlier time sees a girl playing with her younger brother in a bathroom that has huge implications of incestuous actions that left me feeling uncomfortable in a bad way. There are some nasty subject matters Corpse Party covers that include rape, suicide, incest, paedophilia and murder and so this isn't a feel good game in the slightest. I must mention there is one sequence buried in chapter five that really gave me the fear!

New additions for the PSP and later versions include a whole bunch of extra students showing up in the game and frankly weird light hearted 'extra' chapters that follow various students from other schools doing such bizarre things like finding a friendly ghost his missing stylish hat and designer glasses. In all versions occasionally you are treated to beautiful Manga artwork of particular scenes (usually of corpses it must be said). The music is tense and moody and really helps with the pure bleakness, though ramps up to some awesome dramatic music for the whole of chapter five. 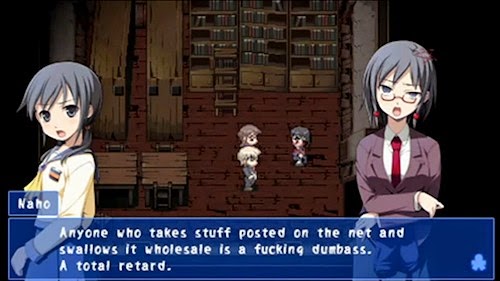 Overall the story and setting of Corpse Party is the thing that kept me going. The idea of a closed space where children all over Japan have found themselves eternally trapped in, suffering their own personal nightmares is an engaging one that feels so fresh. Students leaving desperate notes ranging from the darkly humorous to the bleak constantly make this setting feel real and horrific (one student who writes about being so thirsty that he decides to cut his wrists open to drink his own blood, others who resort to cannibalism and depraved acts on the corpses of their friends),

For such a basic looking thing this frankly amazes me at how creepy and sinister it manages to be without really even trying. You wont get through this without at least being disturbed at least a few times but for some the lack of actual gameplay may well put them off long before the end credits roll, as may the often perverted dialogue it should be said.

Posted by Daniel Simmonds at 06:23