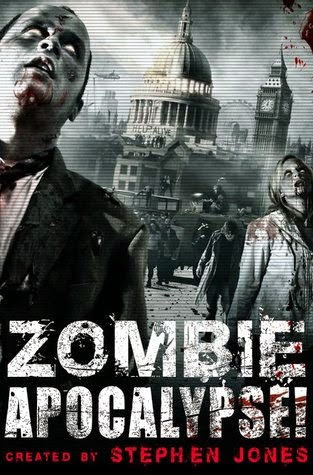 With such a generic title it took me a long time to finally get around to reading Zombie Apocalypse!. What I soon realised was that this was a story that was told in a way I have not really ever seen before, certainly a unique way.

Set in the near future the UK government are preparing for the New Festival of Britain to restore national pride. Their preparations includes construction work around an old church in London which inadvertently releases an old plague; The Black Death which turns its victims into ghoulish undead who exist only to eat the flesh of the living. At first this new danger sweeps the country but then spreads over all of Europe, and then to the rest of the world...

The entirety of Zombie Apocalypse! is made up of various accounts. Diary entries, official letters, police and medical reports, phone and text conversations, video accounts and interviews all meld together to give a glimpse at a world collapsing into chaos. So far so World War Z but what is different here is just how random it all is. With the exception of a young girl's diary entries there is no consistency or recurrence of characters. People turn up, you learn about them, their situation and how they see the world and then in anything from a few pages to twenty or thirty later they either end up in a sticky situation or the account ends and that is it. This is a cool way to do things but it does lead to some vast jumps in the over arching plot.

The first half of the book is centred in the UK, most specifically London. The initial infection and outbreak is summed up best by a police report of a night of madness that was truly chilling and unsettling. Later on after a certain event happens the book then leaps all the way over to Australia for another thrilling account, this time a radio broadcast from a trapped flying doctor. It is explained that all of Europe by this time is overran yet there is nothing about Europe in the various letters and transcripts. Soon after this the action then leaps over to America and Mexico where the book comes to a close. Not having a consistent overview means a lot of plot just happens 'off screen' or off the page I guess. This is no where clearer than about ten pages before Zombie Apocalypse! ends where a real curve ball is thrown at the reader with brand new information given that was never hinted at at all in the rest of the near 500 page story and just seemed there to finish things quickly.

Zombie Apocalypse! also struggles in deciding on whether to be a comedy or a horror with different parts having very different tones. On the humour side of things there are items such as the minutes of an emergency planning committee whose pre created plan for a potential zombie outbreak was done as a joke but accidentally got released as a document to be taken seriously (the plan consisted of something along the line of a drawing of a zombie with the words 'run away fast!' written next to it). The horror side of things works well as well, especially considering near all of the documents end with the main character of the piece getting killed. A highlight for me was a doctor who gets stranded in a remote Australian town over run by the undead.

This is a well written book and one that has also been set out to appear legitimate. Diary entries for example are hand written rather than just plain text while letters appear on appropriately headed paper. There is a lot of variation so I never got bored. There is quite a lot of violence but for the most part this is people running or hiding from zombies, not going out their way to fight them. The zombies are runners as well as shamblers and visibly get more intelligent as the plague and story progresses. They are said to be controlled by ticks and fleas which makes for a slight change.

Overall I did quite enjoy Zombie Apocalypse!, it just suffers at times due to the leap in locations and inconsistency and while it works I feel more of a universal plot may have helped better. To finish I have literally just discovered this is the first book in a trilogy so I would be interested to see what happens next.