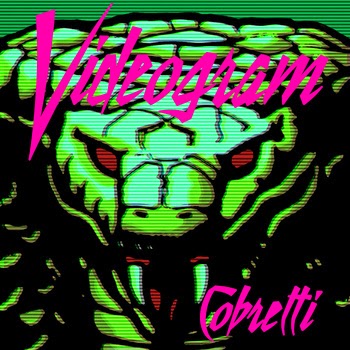 Magnus Sellergren's Videogram project is always a joy to listen to, I loved the self titled debut album Videogram and now he has a new E.P out. With the new E.P Videogram has not strayed from the successful method of basing the music on trashy films of the late 1970's and 1980's. I realise this is not horror based at all, but for Magnus I make an exception as the sensibility is the same.

The album's title Cobretti gives away the fact that all three songs are based on the 1985 Sylvester Stallone fronted action flick Cobra that I am ashamed to say I have never seen. The first track Cobretti has a video that mixes up clips from the film to awesome effects. The editing for these videos just seems to constantly improve, what happens in the video fits so well with the musical beats. The second track The Night Slasher is not bad, but it is final track Cobretti End Titles (featuring D.A Medina) that was the most enjoyable.

As always my one complaint is that the songs are over all too quickly, being as they are around two minutes in length. I could happily listen to these tracks for hours at a time, but then that is what the repeat all button is for. The E.P can be brought from a number of places, including here for $3. Check out the video for lead track Cobretti below...