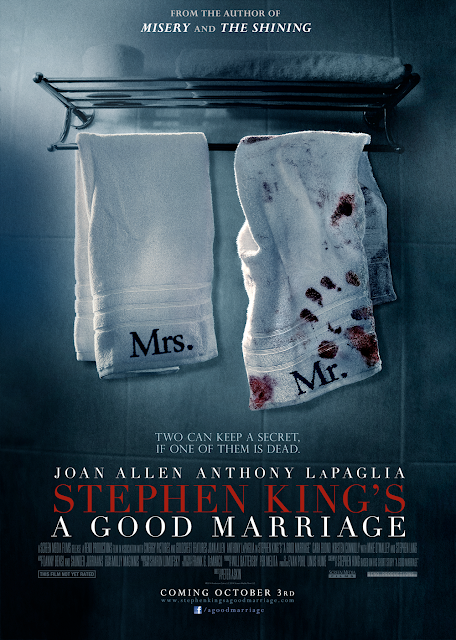 A Good Marriage is based on a short Stephen King story of the same name, and it was King himself who adapted that story into a film script. Now I know it is commonly understood that he is a master of writing but personally I have never read a good book of his, in particular his short stories are mostly terrible.

Darcy Anderson (Joan Allen) seems to have the perfect life. She lives in a beautiful house, has plenty of friends and a loving husband and kids. Her idyllic lifestyle all comes crashing down one fateful night when she stumbles across a hidden box in her garage that suggests her husband Bob (Anthony LaPaglia) is actually the notorious serial killer known as Beadie. Not long later, Bob realising her discovery confronts Darcy and gives her an ultimatum; either she can report him to the police, which in turn will ruin the life of her and their children, or with the promise that he wont kill again they can continue living the dream life she is so accustomed to. 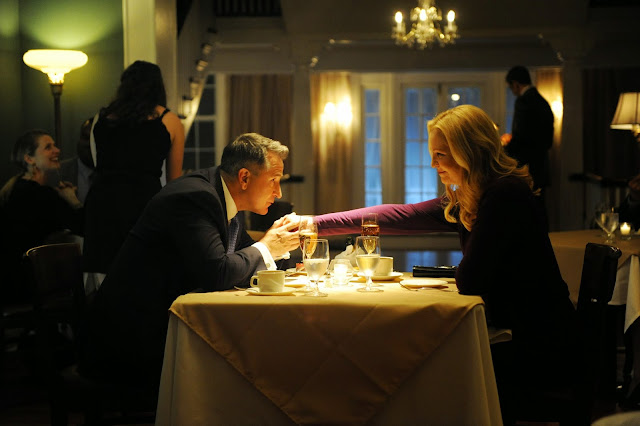 Despite the subject matter A Good Marriage is not a horror film, I would not even class it as a thriller, it is more of a gentle drama where the only real horror elements come in dream sequences. The grim discovery happens around twenty minutes into the movie and the confrontation rather than sinister actually turns quite darkly comic as Bob is so nonchalant about the whole thing. The twenty five years of married life between them means there is not some tense stand off as these are people who pretty much know each other.

Nothing much really happens in the film at all, but I got the sense that was the point of it all, turning the whole process on its head there are no thrilling chases, brutal violence or even any swearing. The serial killings are only shown from news reports, and Bob himself is almost too nice of a guy. This doesn't work so well for the character of Darcy who just appears unconcerned about the vile things her husband has done, I spent a fair bit of the film wondering just what she was thinking by allowing a sadistic killer to live just to keep up appearances. There is a sub plot involving a mysterious man who seems to be shadowing the Anderson family, this man (played by Stephen Lang) steals the film in the scenes he appears in despite having a virtual blink and you miss him role. 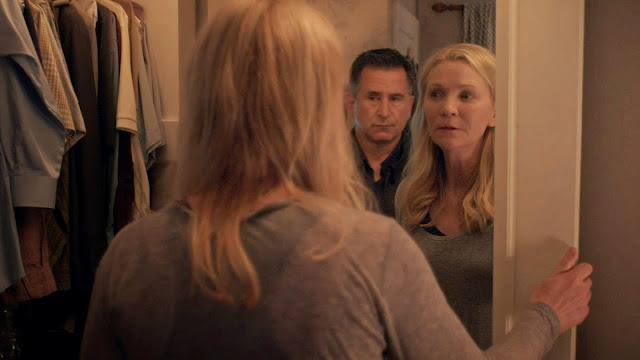 As previously stated the horror mostly comes in dream sequences, and there are so many of these that the Xanax munching heroine has that I started to doubt what was real and what wasn't. I'm not sure if that was intentional but it got in the way when a key scene early on left me pondering if it had actually took place at all rather than digesting the new plot beats.

It seems strange to say this about a serial killer film but if you are after something gentle then this is actually not a bad flick to chill to, it is inoffensive and the acting is not terrible and also reasserts my belief that relationships are not a good thing to have. I found myself with brain switched off just enjoying the mellow setting and what is essentially pretty much a character piece drama. If your after scares and thrills stay away from A Good Marriage, but sometimes it is nice to just dip your feet in the shallow end.

Posted by Daniel Simmonds at 13:37