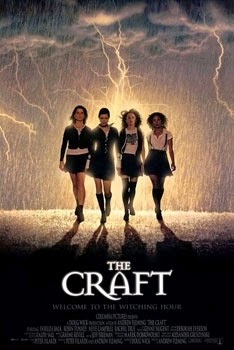 I'm about 95% sure I actually own The Craft on VHS somewhere or other, but watching it on Netflix the other day was my first actual time seeing it.

Sarah Bailey moves to a new town with her Dad to start a new life. At the local Catholic school she befriends three outcasts; timid Bonnie (Neve Campbell), bullied Rochelle, and mouthy Nancy (Fairuza Balk) who practise witchcraft together and invite her to be their fourth member. Soon after the magic spells they perform actually start working and each of the four girls gets their biggest wish to come true. With their new found power and confidence they set out to do greater and greater things but everything has it's price and soon it comes back to haunt them, Sarah in particular. 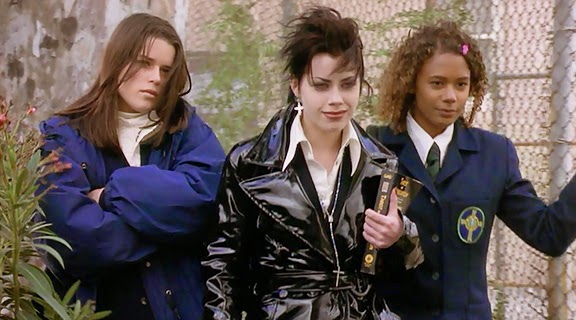 The best thing about The Craft is it's excellent 90's soundtrack (including Elastica, Portishead, and Siouxsie and the Banshees among others) it is used well also, appearing at appropriate times. Sometimes you just forget how good music was but it also has the adverse effect as marking this very much as a film of that time. The film is not actually horror per se, sure there are witches and there is a body count as well as some scenes of straight up horror (such as a house full to the brim with insects and reptiles) but this is more a teen high school flick, focusing on the different cliques that exist in the American school system.

The characters themselves are all interesting in their own ways, for the main four girls at least. They all have some depth to them, especially with crazy Nancy who yearns to get out of her trailer trash hell, and with the reasoning behind Bonnie's shyness. When these characters get evil they do a good job, Balk who goes overboard with the insanity is a real fun person to hate. For all their bad ways though they always seem a bit ineffectual, more likely to try and scare people than actually set out to do them harm (for the most part they just float around and laugh a lot), It is telling that there is not a single good male character to be found here. The boys at school are all horrid jock types, while the male parents are shown to be either abusive or missing. I guess this rode on the waves of girl power that swept the world around that time. 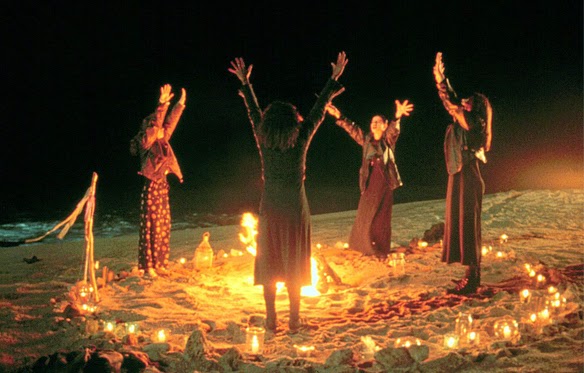 The Craft did seem to drag ever so slightly, around twenty minutes before the end the last real plot twist happens and from then on it is just lots of running around when things should have been tied up quicker. The final action scene is very well done though it has to be said and things all wrap up in a satisfying manner. It just seems stupid that these girls get access to working magic and are able to use it so freely with little real risk to themselves. All I will say is the magic shop lady has a lot to answer for!

Overall I really did not mind The Craft, it whiled away a few hours and entertained me and that is not a bad thing at all.

I use to watch this and "Hackers" a lot on cable in the 90s! It's been awhile since I last seen it, might have to fire it up on Netflix soon.