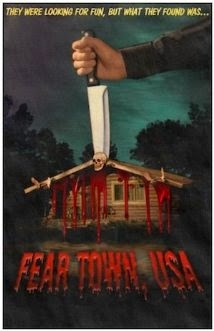 Fear Town, USA is a comedy horror directed by Brandon Bassham and populated entriely with a group of film students. It is of course an indie film and often humour does not mix well with zero money.

Four geeks learn that there is going to be a wild party to celebrate St Blevin's day (a national holiday celebrating a pilgrim who drowned a load of Polish children). They decide to head to the party in the hope they will finally loose their virginity but along the way they cross paths with all manner of obstacles.  At the party itself a girl arrives with friends but she holds a dark supernatural secret that soon makes itself known. A psychic learns that the devil himself is also in attendance at the shindig and to top it all off in the nearby woods lurks a dangerous psychopath who has recently escaped from a mental asylum. 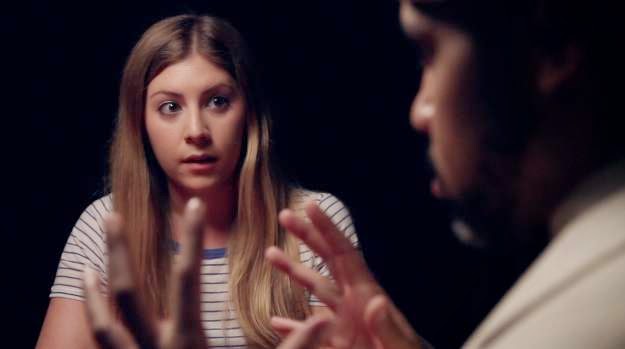 I was not sure what to expect of the humour but to be honest in a lot of places it is actually quite funny, only once did I actually laugh out loud but once is still an achievement. A lot of the comedy comes from silly scenarios and crazy characters. For instance the geeks get pulled over by a cop who it is discovered thought it was illegal to drink or drive rather than drink and drive, once learning his mistake he starts going over all the many innocent people whose lives he has mistakenly ruined. The geeks journey in total feels like a mini 'Dude Where's My Car?', they even get kidnapped by some lame cultists at one point just like in that film.

Meanwhile the other plot lines going on have more of a horror element to it. While it takes place in the background of the main storyline there are a variety of people killed by a figure dressed in black and wearing a welding mask, these scenes are the funniest as the characters that get killed are usually dispatched in kinda hilarious ways, from the guy in the pre credits sequence who accidentally shoots himself and his girlfriend dead while attempting to get the slasher, to the victim who is rooted to the spot screaming as the killer constantly fails to shoot him using a bow and arrow. One extended scene in which two stoners talk about how self aware they are as their friend is nosily being strangled to death in the background also was cleverly done. 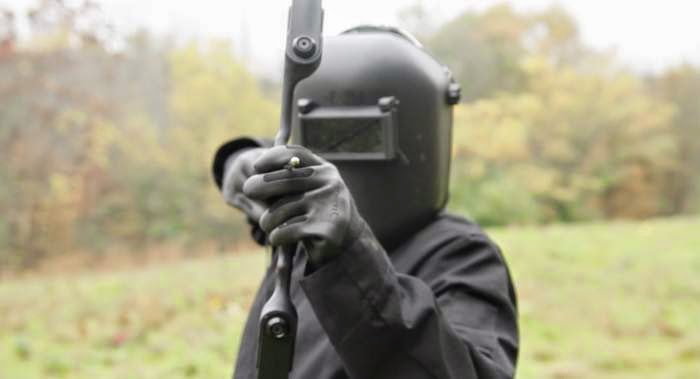 Often the laughs fell flat for me, there are a few too many sexual jokes thrown in that just bounced off my humour style, they threaten to overwhelm at times especially during one protracted sex scene near the films end that had a real whiff of the bad side of Austin Powers films, there was also a joke about paedophiles early on that luckily had a nice ending to it but it was a bit uncomfortable for a time. Luckily the acting throughout is pretty solid for an indie, there are a lot of characters that appear and there were none where I thought to myself that they were terrible actors. It is always a pleasure to see a low budget film with good acting and good effects at times

For the most part Fear Town, USA is just too patchy to be an amazing film, the many different plot threads seem unrelated with sub plots that didn't grab my attention. The geek storyline was the most well rounded one but others such as the mystery of which person at the party was actually the devil in disguise were not that interesting or well done. It shows some decent nods to the horrors of the 70's and 80's summed up in one all too brief  funny scene that features special 3D (of the old style red and green variety no less!) and even sees fit to feature a medley song that was bearable. 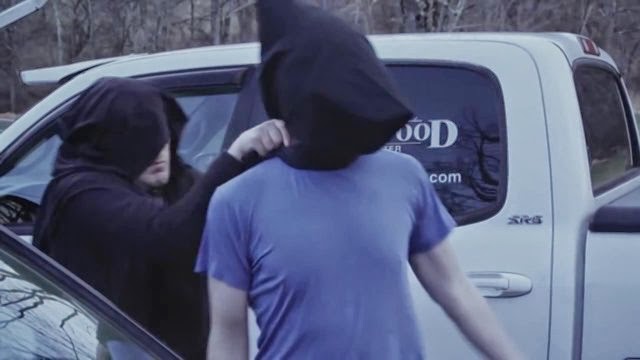 Overall there are laughs to be had here, there is some low budget horror that is actually quite fun and features a high body count, but a few too many dick jokes spoil what is often a witty script. Still I would say if you want some horror comedy in your life then this is not a waste of 90 minutes and it is free to watch online at places such as YouTube.

Posted by Daniel Simmonds at 09:24