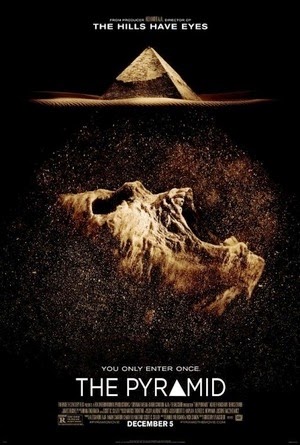 A horror film set in a desert? An ideal film for Christmas I felt. With a very limited run I only just got around to watching this before it vanished, This Egyptian based horror contains elements of the milked to death 'Found Footage' genre as a warning to people who are allergic to that. This is quite similar in feel to the recent As Above, So Below and The Descent also.

In late 2013 a unique and extremely old three sided pyramid is discovered buried beneath the sands near Cairo. A father and daughter team are in charge of the excavation but due to civil unrest in the country they are ordered to leave before they get a chance to explore inside it. Before they go they send in a robot to have a quick look around but after they loose contact with the machine they, and a few others (including a documentary making duo) decide to head in to retrieve it. By a series of unfortunate events the five strong team find themselves trapped in the gigantic pyramid and to make matters worse they are not alone...

First of all the script for The Pyramid sucks, as in really really sucks. I would honestly not be surprised to find out the actors just made up their lines as they went along, that's the level of quality being spewed out by the small cast. Around half the dialogue just seems to be people pointing out the obvious, biggest culprit being the cameraman Fitzie played by Inbetweeners James Buckley who never shuts up describing exactly what is obviously happening on screen, like your own personal monologue. The rest of the dialogue is no better, it is so generic and terribly written that it is just hard to even take it seriously, such as an earnest conversation where one character says to another "I would rather die trying to escape than just die". Is all so serious and so poor at the same time with people making the most ridiculous decisions that I could not help but roll my eyes on more than one occasion. Also grating is the most well known Egyptian facts being reeled off like obscure knowledge, I learnt that stuff in lower school!

For such a small cast you would imagine they would have some depth to them but no, not really. The Dad; Holden is a traditional archaeologist, his daughter Nora the typical head strong young independent woman, both of these appear more concerned with their discoveries than the actual predicament they are in. Next you have Fitzie who is the films comedy character and super irritating for the most part, then there is Sunni the documentary maker who is the screaming member of the group. None of these characters have any depth to them at all so it is to the actors merit that for some at least you actually come to care about their plight, (well one character). 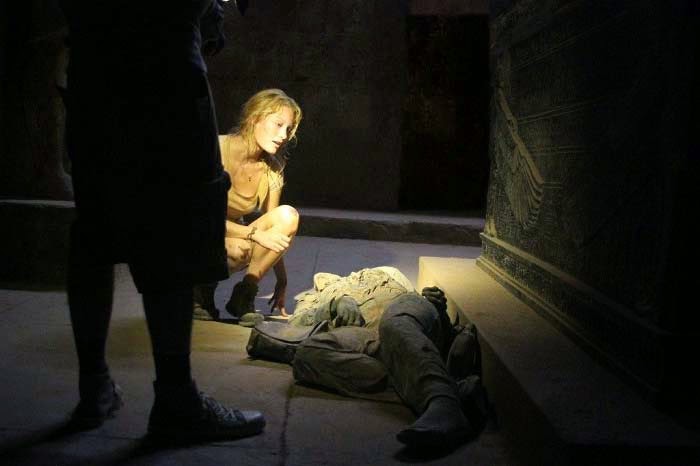 What saves The Pyramid from being truly a stinker is that it actually has some pretty decent ideas hidden within it. For a while in my youth I was obsessed with the Ancient Egyptians (even went to see the pyramids for my 18th birthday) and so a horror film based on their beliefs and rituals was interesting to me. There is clever explanations for some stuff here (not so great for other things but more on that later). With small claustrophobic sets and frugal use of light sources you do get the impression of these people being trapped underground.

Old ideas around pyramids are abound, there are sand traps, spike pits and secret doors but all given decent effects to make them nearly work. The pit trap room in particular was an early stand out moment in the film which made me wince and was a fun little sequence. There are a multitude of bizarre vicious small cat like creatures that appear every now and again (with a stupid reason for their existence thrown in for good measure) and a frankly fantastic 'big bad' monster that looks really scary and messed up and has a fantastic roar that twirls off into ear wrenching distortion. This creature alone saved the film for me and led to some really fearful moments. Early on an endless supply of jump scares threaten to drown the films atmosphere so this later appearance of real horror was most welcome. 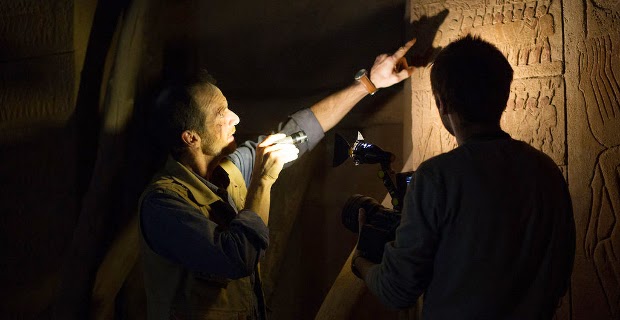 While there is a lot of found footage style camera work (two of the characters have recording equipment) there is also plenty of normal style footage mixed in also. More importantly there is virtually no shaky cam footage at all so this close up personal camera work actually works in the films favour in such a confined location.

All in all if not for some niggles this could have actually been a decent film. There is a lot right with this; the creature design, overall look of the thing and some brutal violence but on the other side of the scales you have bland lifeless unrealistic characters, a terrible script, over explanation of everything, and some weird plot contrivances. A real mixed bag.

Posted by Daniel Simmonds at 01:05