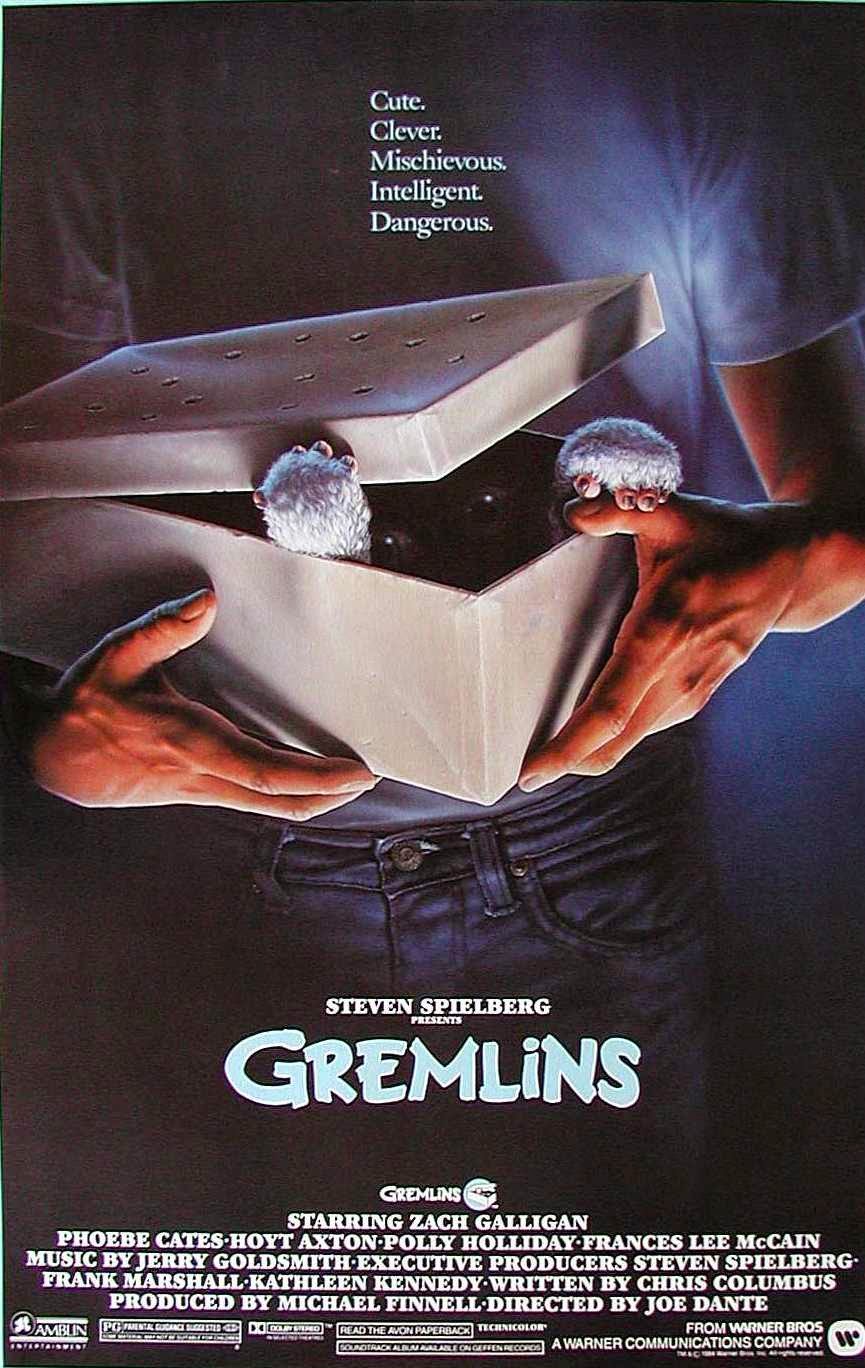 Happy Christmas 2014 everyone! As it is this special time of year again I thought it was about right to review one of the many traditional Christmas films out there. This year I chose Gremlins for my Wintery cheer.

Randall Peltzer; an amateur inventor is visiting New York when he is led to a strange shop. There he discovers a bizarre furry creature that the owner calls a Mogwai. Randall wants to get the creature as a gift for his son Billy but the shopkeeper refuses to sell. In secret the shopkeepers nephew sells it to the inventor but with a warning; he must follow three important rules. No,1 - Don't expose the Mogwai to bright lights, No.2 - Don't get the Mogwai wet, and the third most important rule is No.3 - never feed the Mogwai after midnight. After Billy gets the pet that Randall has named Gizmo the inevitable happens and all three rules are quickly broken. Contact with water results in the creation of more Mogwais and when rule three is broken with these new and mischievious ones they mutate into gremlins; reptillian monsters who set out into the sleepy town of Kingston Falls to bring chaos and destruction during one night of terror... 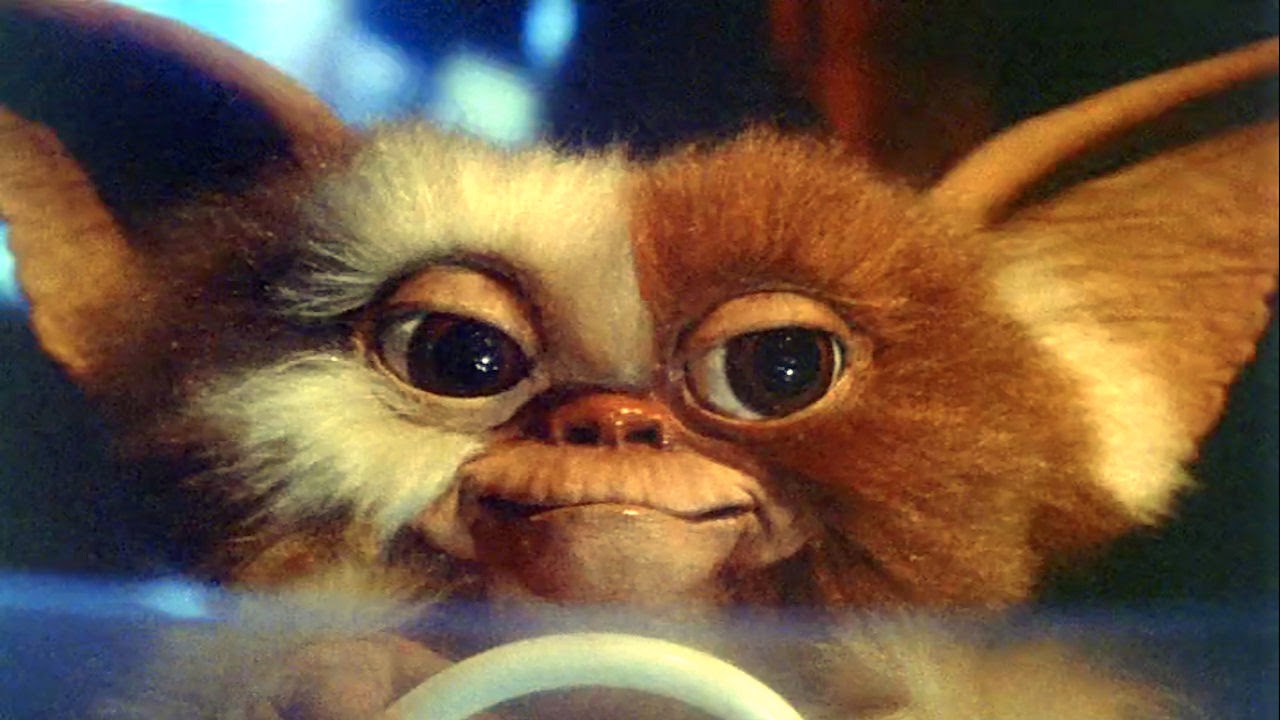 There is no doubt that Gremlins is a stone cold classic but it is also a film that has some problems with pacing and with establishing a solid tone. Initially it was to be a much more darker film but the films plot was altered to make it much more child friendly. There are two distinct parts to the film. The first 45 minutes is played more serious (though it never stops being black comedy). The initial creation of the Gremlins takes up this part of the running time and mostly sets up the character of Billy and the small town he lives in. The second half of the film is much more comedic with the insane Gremlins rampaging though the streets. The pacing problems come with the decision to have what are almost skits; unrelated little sequences of the Gremlins causing havoc. You get them bulldozing a house, playing cards in a bar, swarming a Santa Claus impersonator. All these are great sequences but don't seem to flow that well into each other.

The design of both the Mogwais and Gremlins are fantastic, nowadays it would all be CGI but here it is animatronics and puppetry. Gremlins dangling from roofs look quite unrealistic but other scenes they look effective and have a variety of ways they are portrayed. At one point claymation is used (including a great homage to The Evil Dead) while animation and animatronics are also used. The film has some really iconic sequences. Billy's mum sticking one of the creatures in a microwave, the family dog tied up in Christmas lights, the Snow White sing-a-long, and the best scene featuring a woman in a haywire chairlift that goes out of control and flings her out a window! The score is also pretty good though the main tune for the Gremlins is quite short and so gets repeated too often. 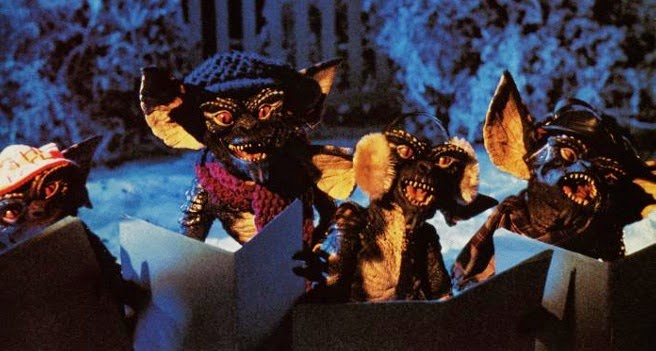 Though there is a comedic vibe characters do get some injuries, the creatures intelligence allowing them to use weapons and to operate machinery. The horror is not too strong though as chaos is more their remit, all in all I think the human death toll here (at least on-screen) equals just the one person. The main human characters are all pretty weak, Billy in particular is a wet blanket, but Gizmo is both cute and likeable while the supporting cast is also strong (including Dick Miller as the paranoid neighbour Murray Futterman, and a young Corey Feldman)

Gremlins is a great Christmas horror and has some great monster designs but it feels quite dated in places and maybe should not have been dumbed down from its original incarnation. The sequel is also well worth seeing though goes even further down the comedy route.