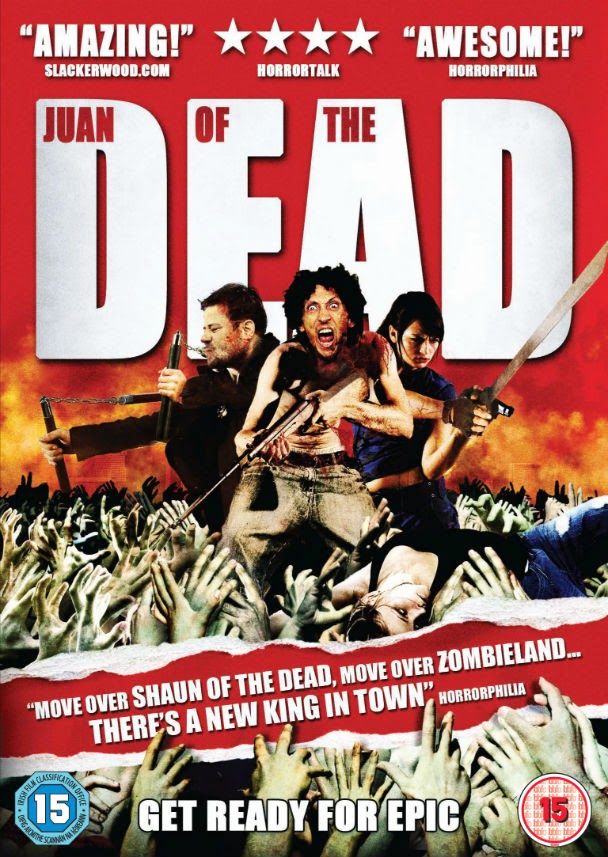 I have owned Cuban based Juan of the Dead on DVD for several years yet it was only at this years UK Festival of Zombie Culture that I actually saw the thing. It has been compared heavily with Shaun of the Dead with a lot of people even suggesting it is better than that film (it's not).

Cuba is facing a zombie Armageddon, the zombies dubbed 'dissidents' by the media are rapidly taking over the country. Many choose to flee by sea but Juan and his slacker friends have a penchant for undead slaying and see the outbreak as a way to get rich quick. They launch a service called 'Juan of the Dead' in which they will for a price dispatch any loved ones someone needs taking care of. With the stakes getting higher and higher they must decide if it is worth staying in the dying city or make a break for freedom. 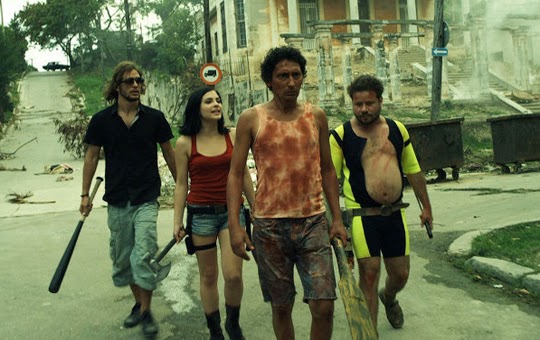 This is certainly a funny film, laugh out loud at times yet at other times it is far too pleased with itself thinking it is being hilarious where the humour falls flat. The visual side is were far more of the laughs come from. Juan's best friend Lazaro is a source of much of this laughs as throughout the film he constantly accidentally kills survivors usually with his harpoon he can barely control, this happens so often that he became a great character. At times it is darkly humorous and there is a definite grey area with these characters as they act without any guilt towards others. One of the best scenes for example had Juan tell a couple of his friends (carrying beer crates at the time) to save a man in a wheelchair attempting to escape the undead, it then cuts to the next scene with the friends turning up using the wheelchair to carry their beer and saying something like "he didn't make it" "we had to leave him behind" "...but not necessarily in that order". The delivery was spot on. At other times as stated the comedy just wasn't up to scratch such as constant jokes about the zombies being dissidents that wore very thin.

The main cast just appear too comfortable in their surroundings, they are meant to be happy go lucky types and take everything in their stride but doesn't make them that likable. Having done time in the army their fighting skills can be excused but it just never feels like they are in too much danger for the most part. The relationship between Juan (played by Alexis Diaz de Villegas) and Lazaro is well crafted and they work well together. However Juan is an ugly lead and I'm sad to say this impacted on my experience as the faces he pulls are very off putting. Also of note is the pretty terrible CGI effects, most notably in an underwater sequence and ones of city wide devastation. 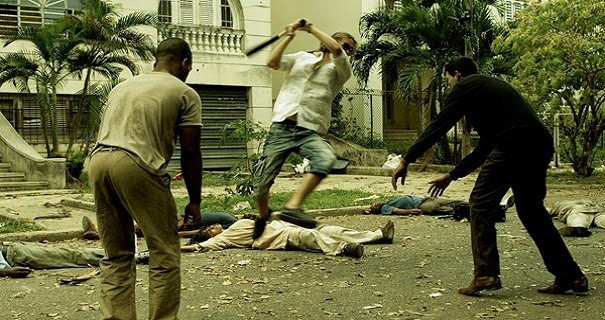 There are some great sequences in Juan of the Dead, one awesome scene involving a car with a harpoon gun on it, while the end is quite spectacular featuring what must be thousands of extras. The zombies are acceptable. they do the part and are quite faceless but feature in a lot of scenes with lots of violence in many different ways against them. The plot is not amazing but goes along at a fair pace with some twists (such as the main cast all ending up naked for a while after the military turn out to be quite hostile to survivors).

Certainly not on a level with Shaun of the Dead but is different enough to stand apart on it's own with some interesting characters (such as one who faints at the sight of blood and so fights blindfolded). It does think it is a far better film than it actually is and that can't help but make me feel embarrassed for it at times. Worth a watch and will make you laugh but not essential viewing.

Posted by Daniel Simmonds at 07:00