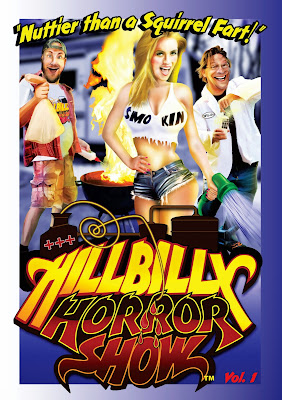 Hillbilly Horror Show Vol. 1 is an hour long horror anthology film that was released on 21st October last month. I have a soft spot for anthology films, of course Creepshow being a classic example.

There are four horror shorts included in volume 1 (volume 2 and 3 to be released in 2015). These include the following films;

Franky and the Ant - this won an award at the 2013 LA Indie Film Festival and is about a wronged man who wants more than vengeance on those who have wronged him.
Amused - A mother returns home to find something horrific attacking her daughter. She flees into the empty countryside pursued by the terror.
Doppelganger - In a tribute to the classic Ray Harryhausen style of stop motion creatures a skeleton goes on a journey to find his own kind.
The Nest - This won best foreign short at the 2011 Atlanta Shortfest and is about a rancher under attack from a swarm of giant flesh eating bees.

So a varied bunch of films and from the awards might actually include some decent stuff. In between these shorts there are the hillbilly's; Bo, Cephus and Lulu who introduce them. Not sure what to make of those parts as the character of Lulu in particular just seems to be there to provide titillation (she is played by model Rachel Faulkner). Anyway if this sounds your thing then go get it, and check out the trailer below...