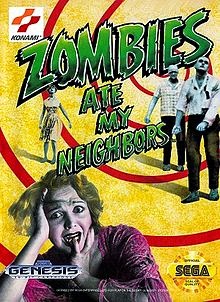 I had a copy of this on the Megadrive soon after it was released, even back in the early 90's I loved my horror. The frankly shocking and horrifically scary title was reduced to merely 'Zombies' in Europe which I am glad of as I am sure it would have led to a crime wave of violent proportions had the far better name stayed.

You play as either Zeke or Julie; two teenage kids whose neighbourhood has been over run by monsters created by the evil Dr. Tongue. Your goal in each of the 55 levels is to rescue your neighbours before they are killed by the many creatures. Each level has it's own B-Movie style title card to it and takes place in a whole range of locations. 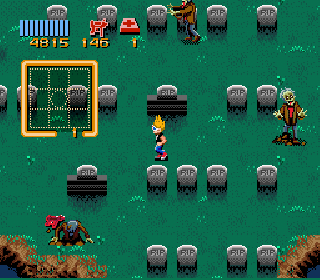 Played at an elevated perspective each level is set out like a maze in which up to ten neighbours are hidden, rescuing them is merely a case of walking into them, but should an enemy do the same they will die with a cartoon angel floating up to heaven. Once all the neighbours are rescued an exit door appears to take you on your way. Starting off in neighbourhoods levels soon take you to many varied locations. You get super markets, hedge mazes, castles, pyramids and much more each one populated with specific enemy types.

Zombies are the most frequent enemy type but there are a large variety of other monsters taken from the best B-movies have to offer. There are Jason Vorhees inspired hockey mask wearing brutes armed with axes (chainsaws in America, but censored for Europe), Chucky inspired evil knife wielding dolls, martians, blobs, giant ants, werewolves, vampires, building sized babies and countless others. The one thing you cannot complain about is lack of variety. To battle these creatures you have access to a lot of power ups and weapons. Rather than guns you have household items. Water pistols, tomatoes, cutlery, plates, soda cans. These all work best against specific enemy types so constantly changing up your weapon is needed to succeed. power ups include a potion that turns you into a hulking monster or a ghost, inflatable clowns that act as decoys and first aid kits to restore lost health. 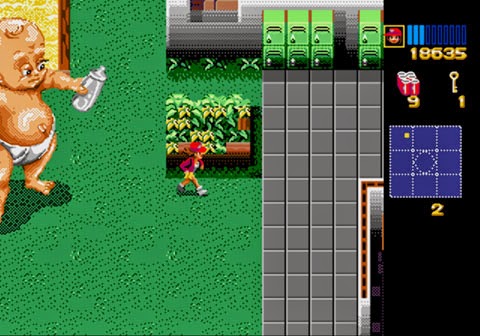 Special mention has to go to the music, since I first heard it in the early 90's the level 1 music has permanently been scarred into my brain, all the music is pretty damn good but with 50 levels and only a handful of tunes they can get a bit samey after a while.

Zombies Ate My Neighbors is a damn tough game! You have 3 lives and your energy bar does not replenish between levels. Starting off with 10 people to rescue if one dies they stay dead which on the plus side makes the level that little bit shorter but on the flip side there is more chance of losing the game as it is game over should all 10 be killed. I admit I did not complete this, I never have been able to but after the first 20 levels I am always a bit bored. I wouldn't usually complain about the length of a game but this is just too long due to the repetitive nature of what you are doing. The weapons don't feel like they have much impact and are fiddly to switch between, and many enemies are too tough meaning you get swarmed by creatures you simply don't have the fire power to beat without taking massive damage. 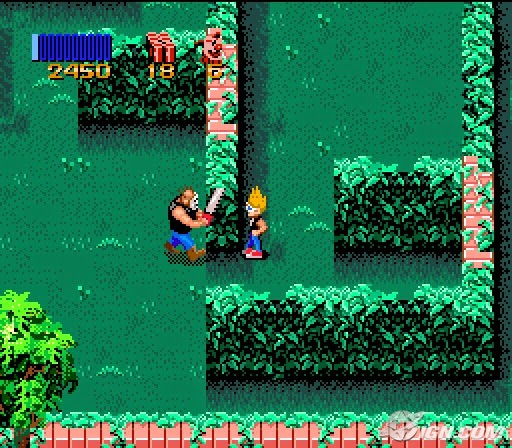 While I do like this game and the sheer amount of variety you get given it is just too hard for it's own good. A password system every five levels helps with this but I just wish you were given more of a fighting chance when it comes to fighting the monsters. Also occasionally you have no chance to save neighbours before they are killed which is always frustrating. So a rough diamond but the graphics and music still hold up today and I imagine it is less boring in two player mode.