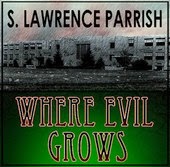 I was contacted back in April of last year about reviewing an audio book by Stephen Parrish and it has actually taken me until last night to get through the whole thing due to having many podcasts also on my listening list. Where Evil Grows was my first example of an audio book.

It takes place in 1976 and centres on a bunch of teenagers and their daily lives. Justin Foley, Jerry, Matt and others are obsessed with the band Kiss and also are slowly entering into the world of drugs and alcohol. Meanwhile strange things are happening to the school they attend, a malevolent force has appeared, taking form in a legion of rats that are building up in the floors and walls of the property. This force is able to affect the minds of the young and soon lead the pupils to worse and worse acts.

Parrish himself reads the book and he has a unique sounding voice. I do not mean that in a negative way, I found the way he spoke almost hypnotic and he adds the right inflections and does a variety of voices for the different characters. I was unused to how long an audio book actually would be, certainly longer to hear a book than to read one, I estimate this story to be roughly twelve hours in length split into podcasts equalling on average 40 minutes in length each. The chapters and sides seem random for the start of each podcast and I found it fun to shout out my own guess at the side or chapter each time I went to listen to one.

When it comes to the horror I much prefer things of a scary nature to things of a gruesome or disgusting nature and for the most part Where Evil Grows falls into the later aspect. Rats infest the school and while they themselves are not supernatural in nature their actions lead to a lot of grossness, especially in a grim finale that left me feeling a bit queasy! The evil force affects people in different ways, and while the students get more and more depraved and violent it never built up to a state that was too menacing.

I actually far preferred the non horror parts to the horror bits. I loved following around the main cast of characters and I loved how for the most part they completely avoid the evil going on around them (they are too old for the force to affect them much). Having them miming to Kiss and starting to learn instruments, hanging out and doing drugs and drinking I felt like I was a silent observer and came to really like these characters. In that respect I came to fear for their well being, after all the book would not focus on these people if the horror wasn't going to catch up to them at some point and so when it came I just hoped and prayed at least some would come out smiling.

The story is well told and actually is nicely planned out with some nice little twists appearing now and again and an awesome final sequence that was so exciting to hear. It all ends with an epilogue that is crazy in it's scope and I did love it but it felt a bit rushed to be condensed into six minutes. Some H.P Lovecraft references are squeezed in in the most unlikely and clever of places which is not a bad thing as his books are some of the most unsettling ever written.

On some levels Where Evil Grows could be seen as a comment on underage sex and underage drinking, as well as the perils and pitfalls of recreational drug use with a lot of the horror involving these situations. At times I felt it was a bit too graphic with it's intimate description of certain acts, while at other times it just became too gruesome rather than creepy (a long description about Guinea Pigs eating each other was not pleasant to hear).

While a lot of the horror portion of this audiobook were not to my tastes I still got a lot of enjoyment out of this being as it is well told and with fleshed out characters who you come to like, Where Evil Grows is free for download on i-Tunes and Podiobooks so check it out if it sounds like your thing (also available to purchase as an e-book).