One of the main reasons I got a new laptop was so that I would be able to run Outlast. I had done a few hours of it on the PC but thought being able to play it on a TV screen would be much more fun and so got the PS4 version when I saw it in a sale. Outlast is a first person survival horror game.

You play as Miles Upshur; an investigative journalist who has travelled to the remote Mount Massive Asylum after receiving an anonymous tip that inhumane experiments are being performed on the inmates there. Sneaking into the asylum you soon discover that the patients are all free and that the staff all appear to be dead, unfortunately by the time you find this out your entrance is no longer available. Before you are able to get the main doors open you are drugged and awake deep in the mad house. Armed only with your video camera you must avoid the attention of the murderous, sadistic crazies and find a way to escape the nightmare... 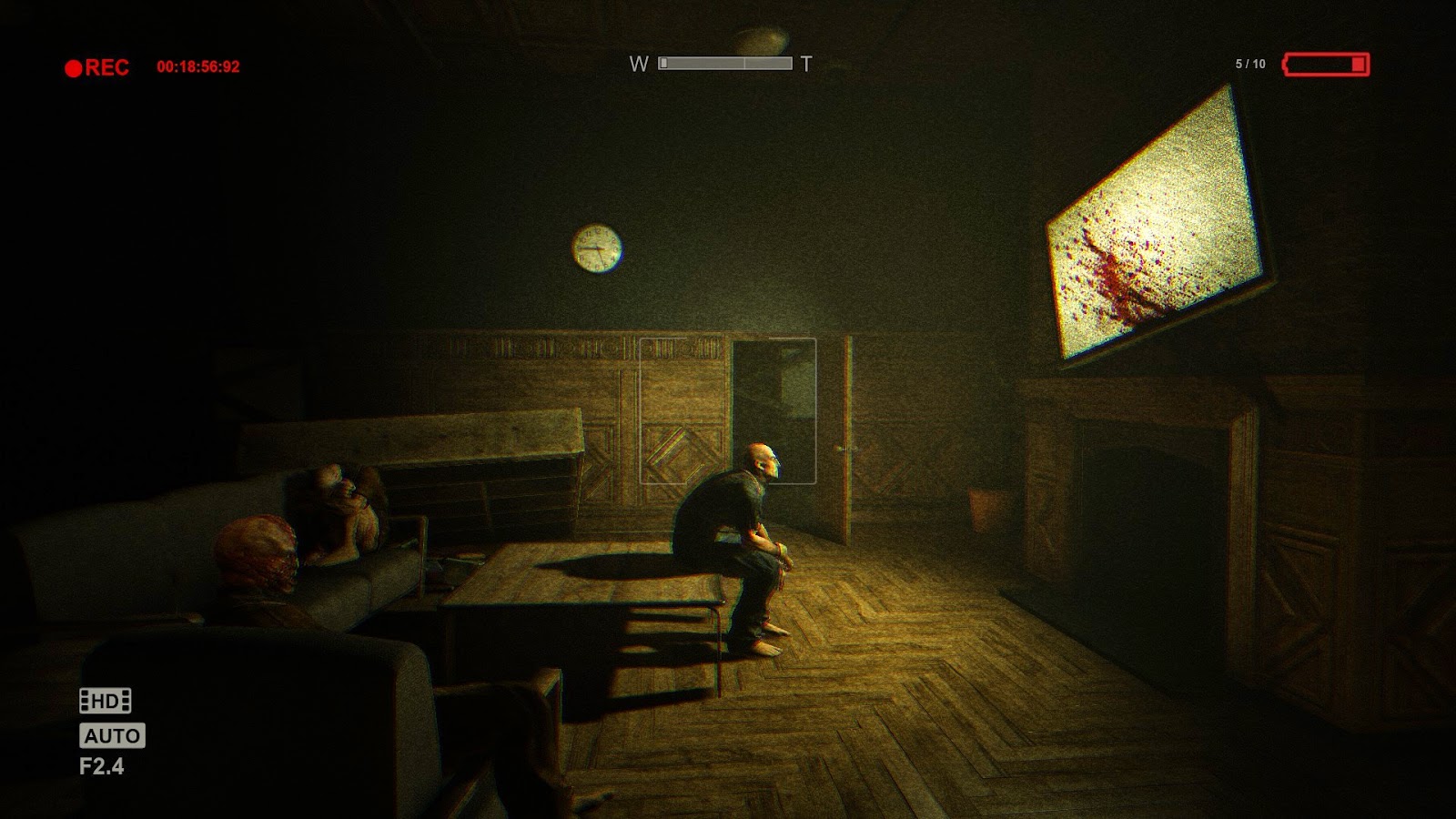 There is no combat at all in Outlast, enemies must be ran away from, or you must hide from them. The video camera you have access to makes the game feel like a 'found footage' version of a game. Whilst you do not need to have your camera out I found it much more atmospheric to film everything. Your camera also has night vision on it which is essential for traversing the dimly lit locations. The night vision drains your batteries so juggling between using it and not is a big part of the game. A cool part in which you loose your camera for a time really highlights just how useful it is, in the dark you have to instead rely on lightning to briefly light up the rooms you are in.

Many of the inmates of Mount Massive are not aggressive towards you, many walk around, sit rocking back and forth or even give you assistance. There are certain crazies who are extremely hostile to you and pop up through out the game to chase you down. A giant man covered in chains was the most irritating of these, he seemed to appear everywhere I went causing much swearing and panic as I ran from him. These chase sequences are great when everything goes to plan but they do get annoying when yet again you find yourself chased into a dead end and killed. There are plenty of signs in the asylum to gently guide you on the correct path and I am very glad there is no hand holding when it comes to telling you were to go but occasionally I did get annoyed that I appeared to be lost. 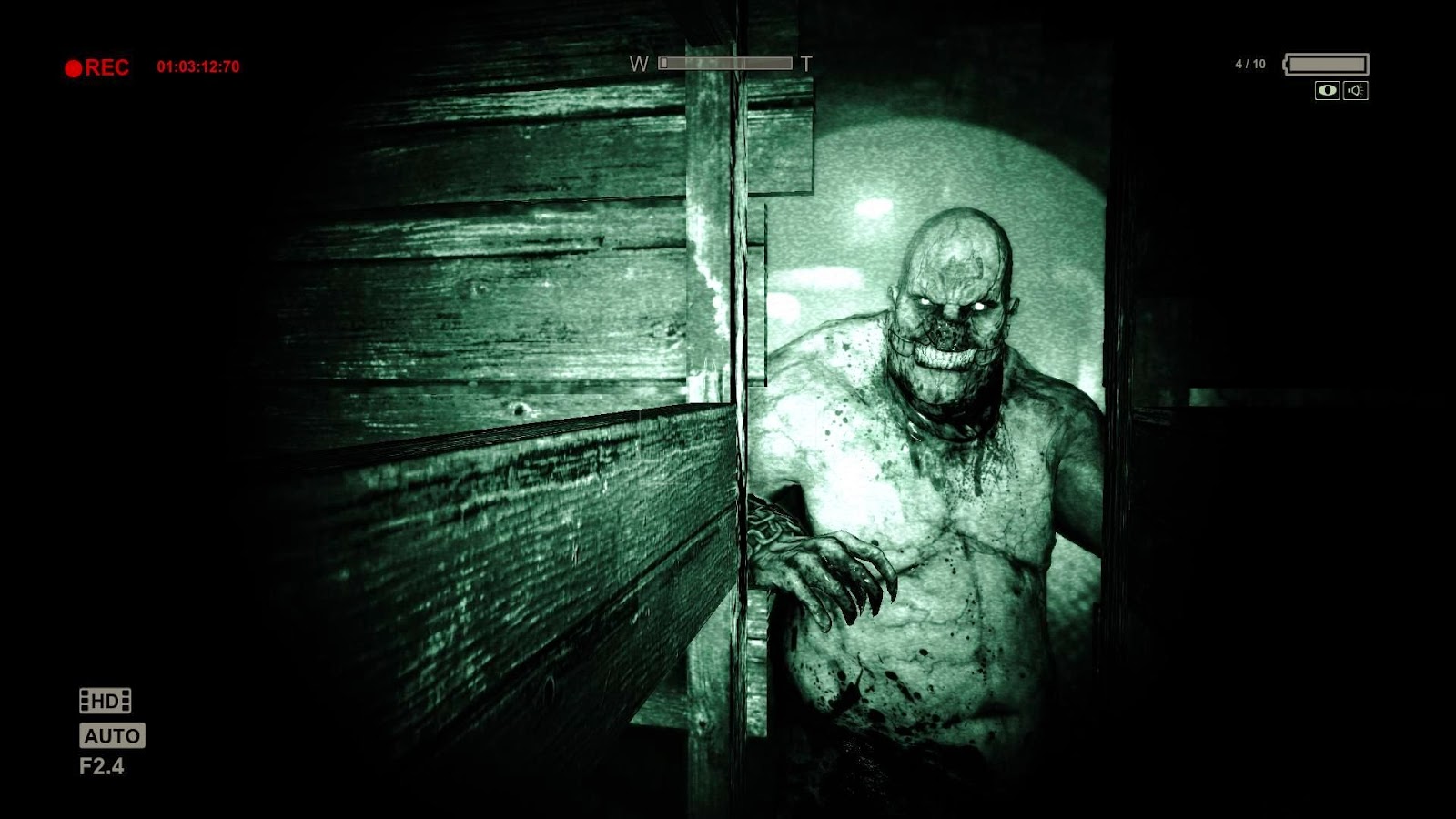 From the administration block to hospital wards, sewers and cell blocks there is quite a lot of variety through Outlast. The drive to find an exit is ever present and it plays with you by several times throughout the experience giving you false hope that you are about to finally escape the horror. I loved these teases and fell for them time and time again. One great moment had you strapped to a wheelchair, your captor wheeling you to the open exit door telling you that you were free to leave if you wished (of course being strapped in a chair you cant do this!) There is a constant thunder storm outside which really adds to the atmospheric feeling of being trapped inside a horror film.

Outlast is pretty linear, once you have completed it there is not too much incentive to return unless you want to do it just to experience the pretty entertaining story once again. There are files dotted around the asylum that shed light on what is going on, whilst if you have your camera out you will occasionally get the thoughts of your character popping up. The music is great but the voice actors are not amazing and characters in general do not look fantastic. Outlast is let down by not many character models, there only seems to be about 6 or 7 different inmate designs which took me out of the experience. The lack of designs also had me feeling that the reoccurring boss characters were not reoccurring at all and meant to be different enemies when they were not. The music and sound effects are decent though. 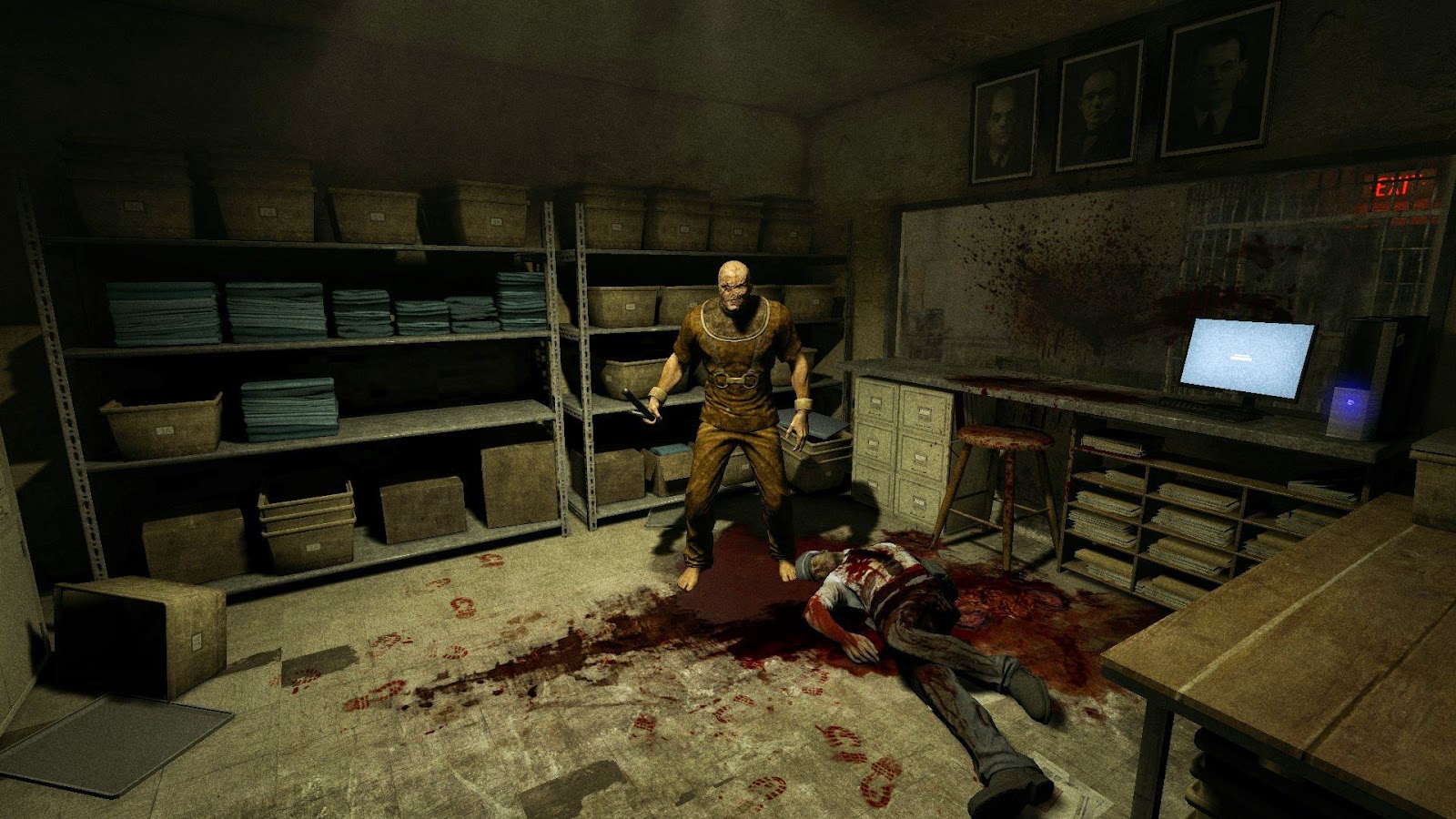 Outlast is at it's scariest with it's jump scares of which there are many, these always made me shout out loud in fright! There is not so much creeping terror, at points I was afraid but in general the only thing you have to fear are the boss characters and occasional crazy armed with a pole, once you have been killed once or twice by these people they loose their fear factor and I instead found myself getting annoyed when once again I was butchered. There is a slight supernatural edge to the game that I actually found myself appreciating and some more open areas kept things from getting stale.

I have not really ever played a game quite like this, I guess Amnesia is the closest thing but that I was not that impressed with. A fun survival horror that I for the most part enjoyed and I will certainly be checking out the DLC when it reduces in price but I am dubious that there is much reason to replay.