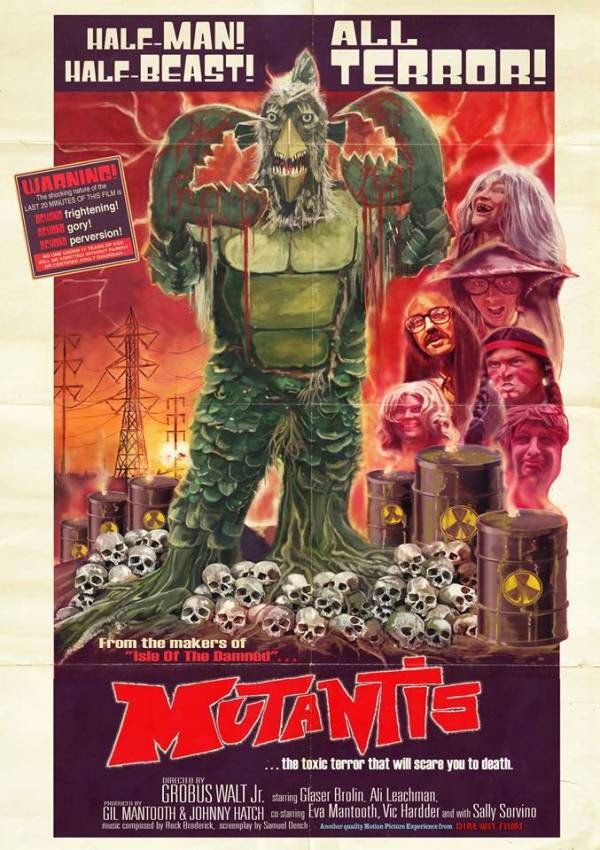 Mutantis is a comedy horror from Dire Wit Films that seeks to parody the B-Movies of old paying homage to the eccentricities of that genre. Obviously an indie film this does not even attempt to take itself or the subject matter it covers seriously. Written by Mark Leake who also wrote for the interesting 7th Day.

Set in the 70's during the age of free love Mutantis follows a scientist called Father Joy who goes on a field trip with his step children in search of the legendary Bigfoot. He believes the creature resides in a wood filled valley that happens to be both near a nuclear power plant and an Indian burial ground. However what is discovered in that cursed place is not a Bigfoot but something altogether more horrific - a sex crazed monster named...Mutantis! 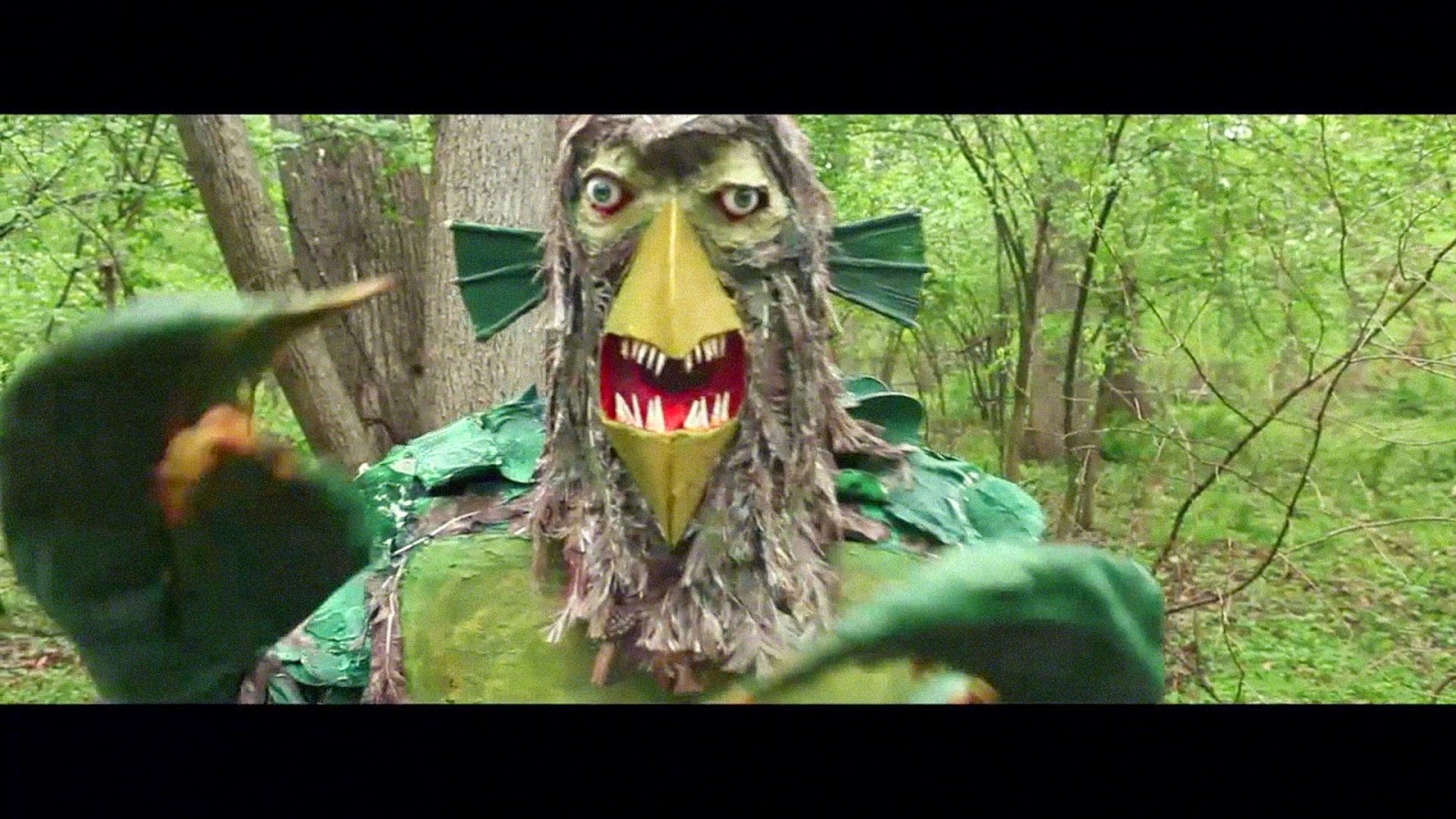 Wow is the first word that comes to mind, this really is something quite different to what I was expecting and something created for a specific mood. The whole style of the film is just wonderful. Grain is used on the camera work and over exposed colours to create the effect of an old film, I cannot fault the camera work and camera effects at all, it is consistently effective.

The acting in Mutantis is utterly terrible but it is meant to so I guess that means it is really good? Pretty much every character is dubbed over and the actors themselves are a bizarre collection where you have males playing female roles while one of the main male characters is played by a female. Pretty much all the characters are blatantly wearing wigs while the facial hair looks like it was sellotaped on. This all works in the films favour and coupled with a script that is near faultless in it's stupidity and po faced nature on the relationship between man and nature makes for a strong sense of the unhinged and works well within the low budget. 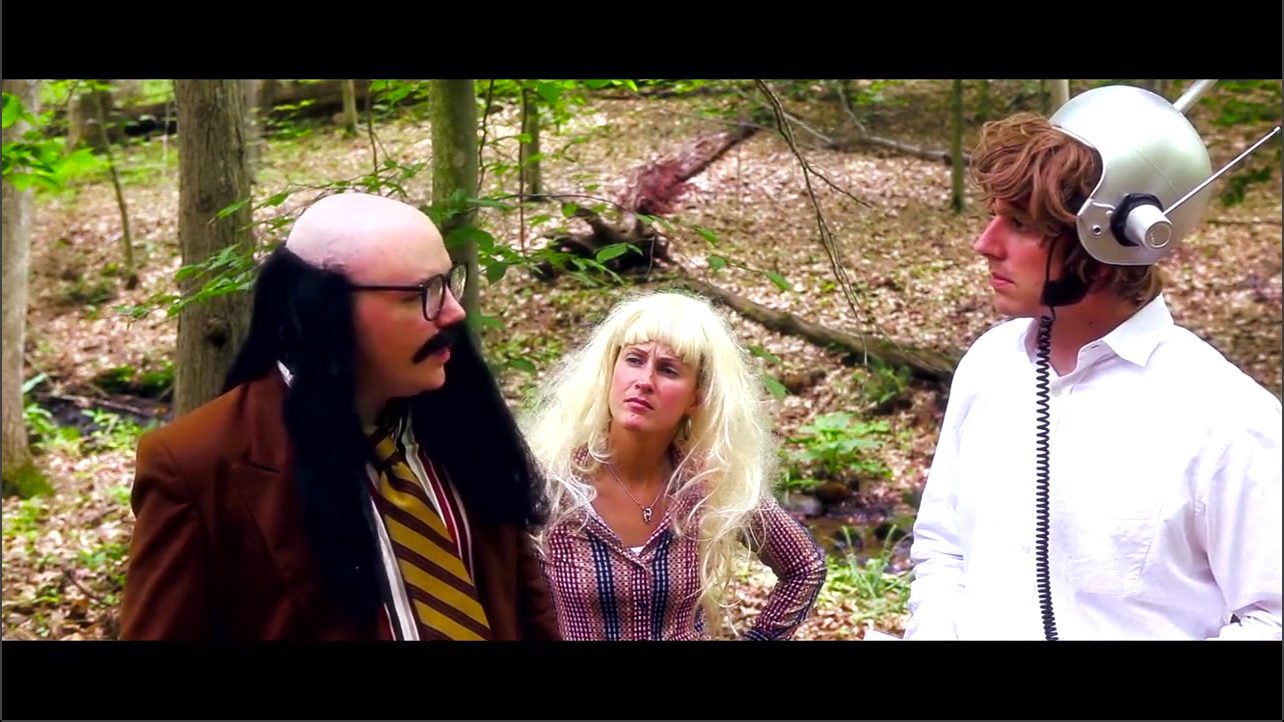 Mutantis itself looks like it was created out of paper mache and cardboard but has such freaky eyes and disturbing attention to its bisexual genitalia  that it actually became kinda scary. The special effects are purposely terrible and there is a high body count due to the creatures pincer claws that lops of heads, arms, penises and even someones breasts at some point all with large dashings of spurting bright red blood.

That is kind of where the film fell down for me though, the creature is obsessed with mating to try and create offspring and so there is far too many bad taste rape scenes in which the creature forces itself on people. Sure it is not done serious in the slightest and wasn't that it made me uncomfortable but more that it was icky and disgusting for my tastes. Mutantis is a film made for people to watch while drunk with friends and I can imagine I would have enjoyed it far more if I had done that, but as it was I watched it while tired after a long days work in my day job and so a lot of the appeal was lost on me. Being a homage to B-Movies the plot was wafer thin which I was fine with but there was just too much of random characters running around aimless in woodland which at times reminded me of a Scooby-Doo cartoon.

Peter Joyce did the music for this film and it may be the best film soundtrack I have heard all year. The music is simply perfect for the subject matter, it summoned the right vibe for me, sounds like I imagined the 70's to sound like, This review has been written with the title screen music on repeat, just cannot get enough of it!

Maybe if I had viewed this in the right circumstances I would feel more love for Mutantis but as it is the many gross creature/human sex sequences and nasty characters were not appealing though I could well see this becoming a cult classic. Mutantis is available to purchase from Amazon USA and also from Dire Wit Films website (here).