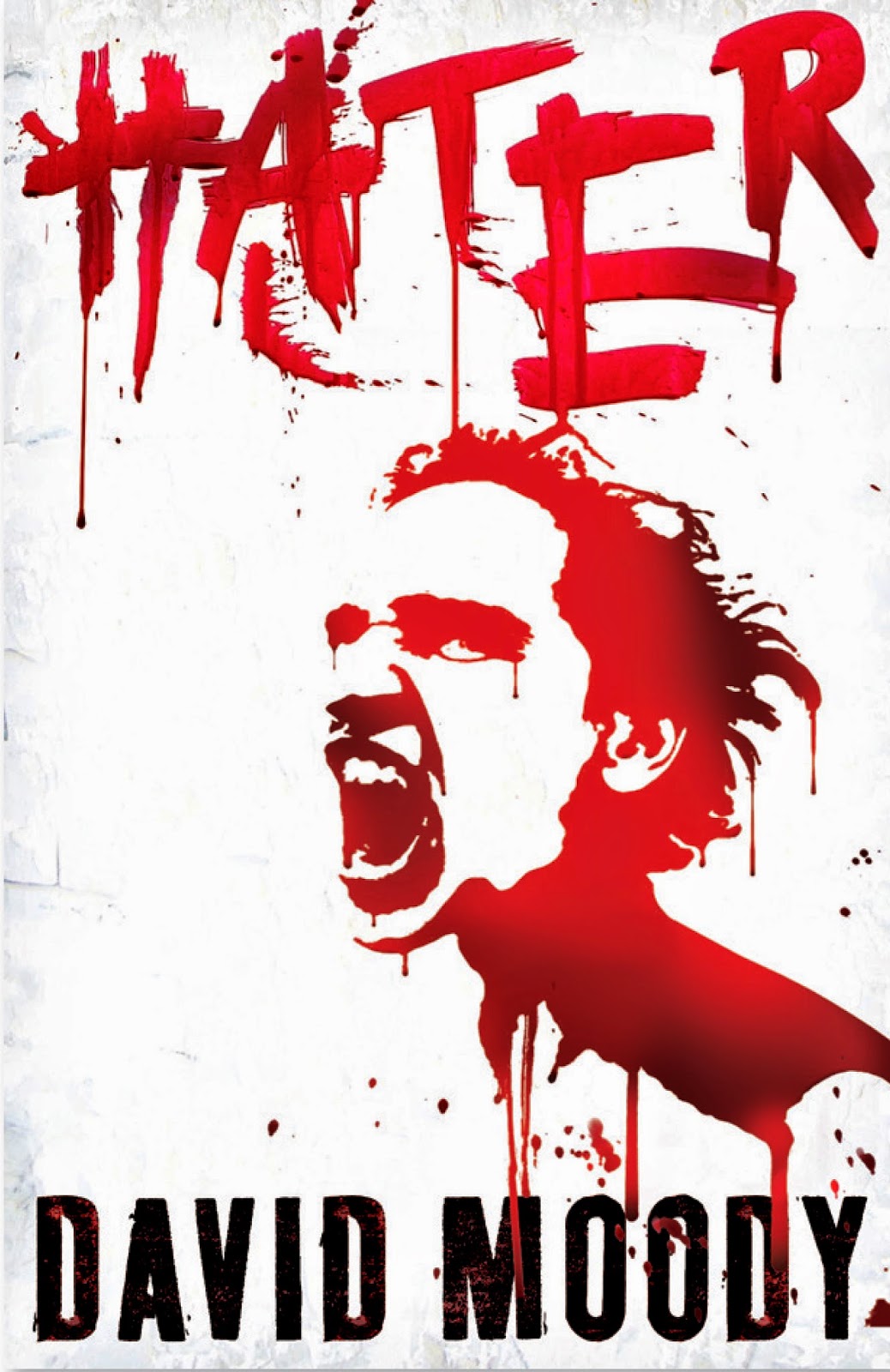 With my often chronicled love of David Moody's Autumn series of zombie books I never actually checked out any of his other books. I picked up Hater late last year and finally got around to reading it last week. While there are no zombies as such he again tackles the concept of the end of the world we know.

There seems to be a disease sweeping the globe, It makes the affected person suddenly become a vicious killer completely out of nowhere, no one is safe, strangers and close ones alike can in the blink of an eye loose all reason and turn to murder anyone. At first it is a few random cases but as the days go on more and more people get this horrific affliction and before long the government appear to loose all control as thousands upon thousands of people turn into psychotic killers with no explanation or cure in sight. Hater follows Danny McCoyne who along with his wife and 3 kids tries to survive in a world that is slowly going towards destruction.

Told from Danny's perspective Hater takes place slightly over a week. Each day has its own title card and this along with the brief punchy chapters creates the inability to stop reading. I just could not put Hater down at all with every spare second I had I found myself returning again and again to it. The concept of something that could strike anyone at any moment is a terrifying prospect and Moody uses introduction chapters to each day usually with the excerpt of someone who is very soon to become a Hater (the term the media use to describe the victims). Best friends, husband and wife, strangers; no one is safe which creates an intense feeling of paranoia.

Danny's troubles are very real; he has a terrible job, money troubles and problems at home with the struggle of raising three young children. Even when there is open violnce on the streets he is forced again and again to face the danger as he can't afford to loose his job, or to go out and get food. Each time he leaves the relative safety of his home I found myself anxious for his safety knowing there could be trouble at any point. The theme of paranoia even goes to his family home though, as while they have barricaded themselves in their house the prospect remains that at any point in time someone could turn on the others. He is by no means a perfect person, he seems very human and has many flaws.

A lot of the theme of Hater is the media's role in swaying the general public on issues of note. Early questions surround just whether the apparent increase in the random violent attacks occurring throughout the country is just a result of news outlets finding stories to report on that normally would not get shown. Of course this turns out all to be a moot point as there really is an epidemic going on.

Rather than leaving you guessing as to what goes on in the mind of a Hater very early on, in fact the very first part of the book reveals just what is happening, the affected person suddenly getting an intense feeling of fear that they are to be attacked and so feel the need to lash out to protect themselves. This makes the whole term Hater immediately redundant in the eyes of the reader, would have been a good twist later on to reveal this was the true motivation but it works as it is.

The sense of paranoia is incredible, the feeling that anyone could turn on you, that any argument you find yourself in has you wondering if the person your speaking to has turned or is just showing natural emotion. Just over half the way into the book and things completely flip around. From that point on the story is told from the perspective of a Hater and holds up a mirror to all you have been told before hand. Just who are the real monsters? The Haters or the ones trying to control the situation. I for one stick to what I thought and found it hard to sympathise with the killers but this was an interesting and unique angle to go on.

While Haters are human, retain speech and all functions anyone else has they still fit into the zombie genre well with their unrelenting violence on unsuspecting and powerless victims, the books end I have seen in any number of zombie films, but usually from a completely different angle.

Well written and addictive Hater is another fantastic David Moody book. As an end note I am very tired today and know for certain this review suffers due to my exhaustion from a bad day job. I set myself the goal of doing a blog post a day for all of October and so here it is; a terrible review for an amazing book!