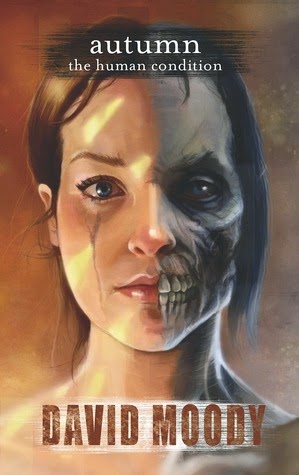 Autumn: The Human Condition actually first came out in 2005. Years in the past I reviewed it but the sands of time (and the fact I was even worse at writing back then) meant that review no longer exists. In 2013 the unthinkable happened; the book was re-released but with around a third more content included! What was already a damn good book became pretty much essential if your a fan of the Autumn series.

The Human Condition is an anthology with a difference. it contains fifty short stories all taking place in the Autumn universe Moody created. These stories are in chronological order starting with Day 1 of the infection that destroyed the world all the way up to Day 119. Many of the stories feature characters that were in the five Autumn books (Autumn, Autumn: The City, Autumn: Purification, Autumn: Disintegration, and Autumn: Aftermath) while many more feature original characters never before seen.

There is such a wide variety of characters and story types that there really is something for everyone. The initial first couple of days there is a slight samey feel as pretty much the same thing is told over and over again but after this things really improve with a whole host of hilarious and depressing stories. A lot of the people focused on are really not great people and so their plights become quite funny. Duck and Cover follows council man Ray Cox who after years of trying to remain inconspicuous in his job now finds himself the centre of attention and the one responsible for re-establishing order. Office Politics meanwhile follows Simon Walters who is existing in a state of complete denial, still carrying out his nine to five job at the bank despite overwhelming odds. Elsewhere you have Lester Prescott whose plan to make his home into a fortress ends with disastrous results.

Many of these stories are cautionary tales with the flawed characters getting their just desserts but others are more touching and sad such as Angel and the fantastic Joe and Me (a key story that the book ends on, had me near in tears at one point!). A few key themes that seem to stick throughout the Autumn-verse are rebellious teenagers (here seen with Webb, Digital and Skin) and a large variety of jilted ex-lovers (Oh No, Not You Again and others). Many contain solitary characters though some feature larger groups such as the series of stories that show how the cast of Disintegration came to be.

Moody really demonstrates his ability to not only tell humorous and touching tales but also to really get in the heads of the characters he has created. Often in his series I would find myself getting confused by the amount of varying personalities so having mostly just one person per story really fleshes them out.

A fitting end to the Autumn series and a treat for people who have read those ones. As a side note the very last story of the 2005 release has been removed in this edition, but when there is so much more extra content (plus the zinger of having the out of time line Joe and Me to finish off things) it is not that missed and was only a few pages long anyway. A top tier zombie anthology.