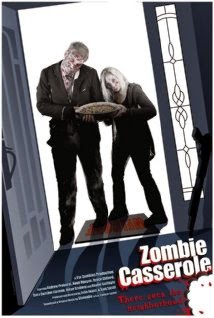 Zombie Casserole directed, produced, and edited by John Iwasz and Sanj Surati is an indie zombie short that has been shown at a variety of film festivals (next appearing in San Diego this October). It attempts to do something different with the genre that we all know and love by infusing a mix of good natured humour into the preceedings.

It takes place in America post zombie apocalypse. In this world zombies while vilified by the media as such are actually not killers. They exist as a minority group who hold frequent rallies and protests to try and get the same equal rights as everyone else. Zombie hater and jerk Wally (Andrew Prokurat) is having a dinner party and invites over his brother and sister and their partners. Unknown to him however his sisters husband Chuck has recently died and come back as an undead ghoul. When Chuck turns up on the doorstep holding a casserole a series of bizarre events unfold that changes Wally's life forever. 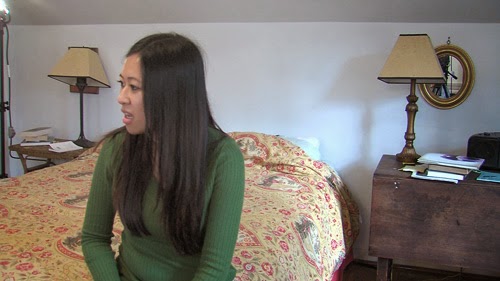 The film is light hearted and doesn't offend but much of the humour for me just didn't stick, I wouldn't say I found any of it funny but at the same time I quite enjoyed the tone. The soundtrack again I did not think was great but it went well with the vibe. In this world the undead are referred to in a derogatory way as 'rotters' while them themselves prefer to be known as 'Undead Americans'. The zombies can talk but not in an understandable way so frequent subtitles appear to show what they are saying. They have basic motor functions and seem to be less intelligent than the living, and while they have a hankering for living flesh they have little to no desire to attack the living.

The zombie make up effects are actually pretty decent, all the limited cast look quite good as zombies so there is no complaints there. Sometimes the low budget can show itself in some of the props and set design, such as a shotgun that does not look real at all but the news reports featured are well made and the acting is not terrible either which is a big boon. The contrast between zombies and the treatment of foreign inhabitants of America is plain to see with Wally at one point complaining that the rotters "won't even learn our language".  For all the laid back nature of Zombie Casserole it does feature some entertaining action scenes, classic such scenes of the genre I would say that fitted in nicely.

Zombie Casserole was a nice little film that is a perfect length at roughly 30 minutes, I feel it would also work well as a stage play. Apart from a few niggles (such as a character choosing an impossible place to hide) this was not bad viewing and does enough different to not be stale and lack of any bad language whatsoever was refreshing.