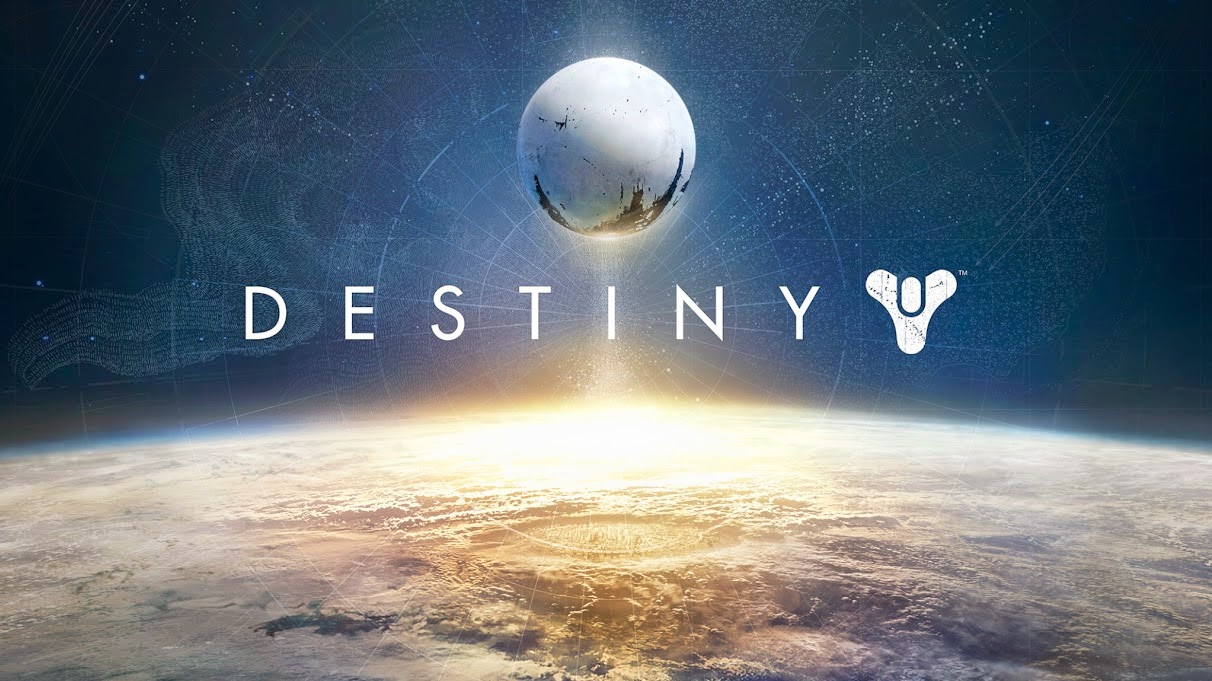 Destiny came bundled with my PS4 I picked up a few weeks back and so was my first experience of this current generation of console games. My desire for this game was not too strong seeing as it is made by Bungie the guys behind Halo. I have never really gotten on well with the Halo games, they bore me, I hoped that Destiny would be a better game.

Destiny is a sci-fi shooter set 700 years in our future. An alien being; a gigantic orb known as 'the Traveller' arrived in our solar system and ushered in a golden age of technological advancements in which humans gained the ability to leave Earth and colonise other planets. This golden age continues for hundreds of years but one day legions of hostile alien races arrive and lay waste to humanity, conquering planet after planet. It seems the Traveller for unknown reasons was being hunted by these beings. Eventually what remains of the human race exists in just one massive city on Earth, a city protected by the Traveller. Ghosts (small A.I) have the ability to resurrect the dead to help fight the fight, these newly awakened humans are called Guardians and lead the fight against the alien menace. Destiny starts with a Ghost bringing your character back to life. 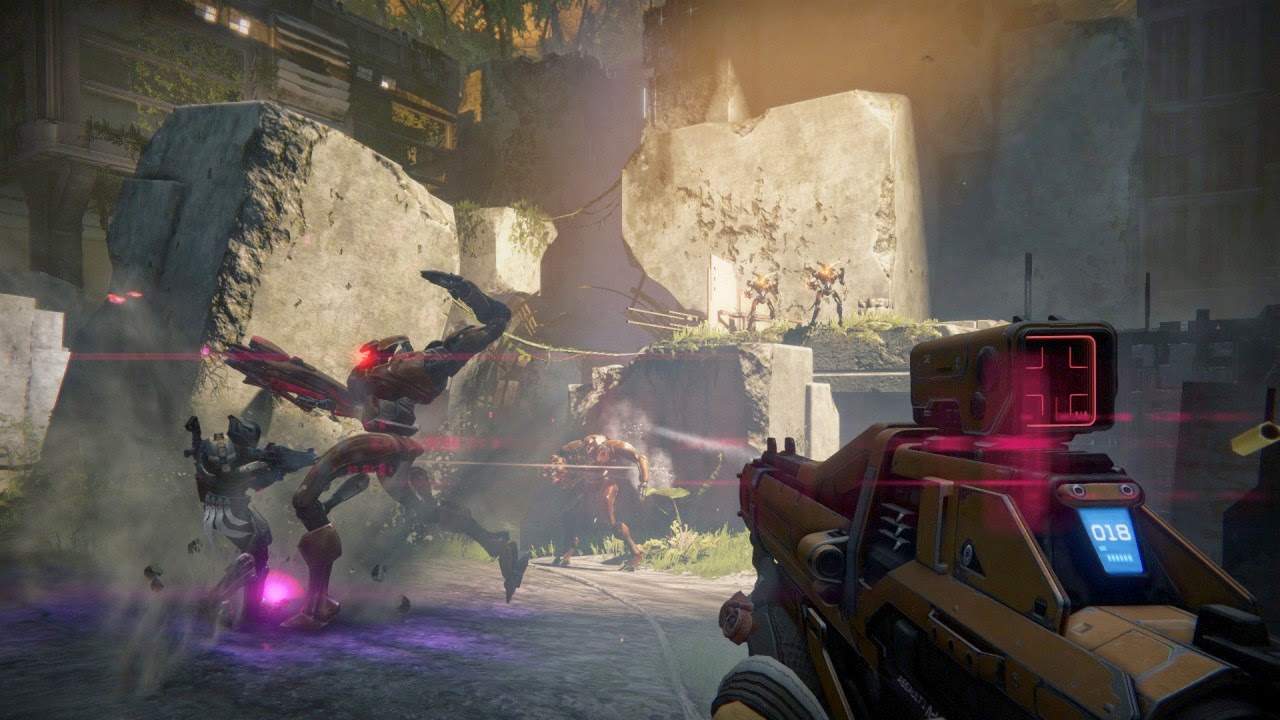 Starting the game you get to design your character and choose from one of three classes. The Hunter class are agile and can fight from a distance (the class I chose). The Warlock class can use magic, while the Titan class are powerful up close. Rather than a straight FPS Destiny like Borderlands involves gaining XP to level up as well as featuring plenty of loot to upgrade and change your weapons, and change various parts of armour you are wearing.

This is a strange game in that while mostly single player there are always other players in your game world doing their own thing. This makes for some frankly awesome moments such as being on the brink of death only for a sniper randomly taking out your attacker and unknowingly saving you. The levels are huge and quite open so there are always a fair number of other players around making for some fun emergent game play. Much like Halo the various alien factions are all at war with each other so often you will encounter a group only to find they are already battling a different group. 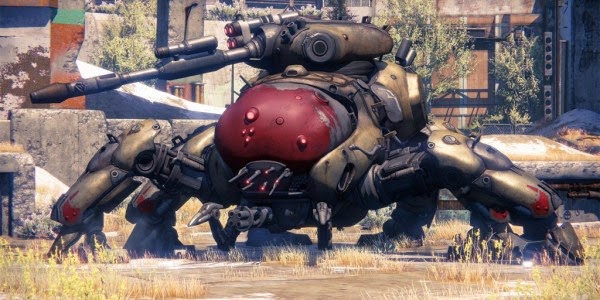 It has to be said the actual plot of Destiny is pretty terrible, the back story is cool but what you actually do does not appear to have much impact on the games universe and just seems an excuse to get you visiting various planets. Always starting off in an open area your mission usually takes you to a more enclosed space where events become strictly single player. The weapons are meaty and have a real heft to them, an actual joy to use. You have two main weapons with a third that has far more limited ammo for it. In my case I spent much of the game with a powerful hand cannon and sniper rifle as my main, with a rocket launcher as my third.

The different alien races are well designed and look distinctly different from each other. The initial ones you fight reminded me a little too much of Halos foes but the addition of the fantastic Vex and Cabal races changed my view. Expertly designed, and introduced. The Cabal in particular had a powerful entrance. Fantastic music started playing followed by the surreal appearance of these huge beings gracefully hopping over the sand dunes in the distance towards my position. 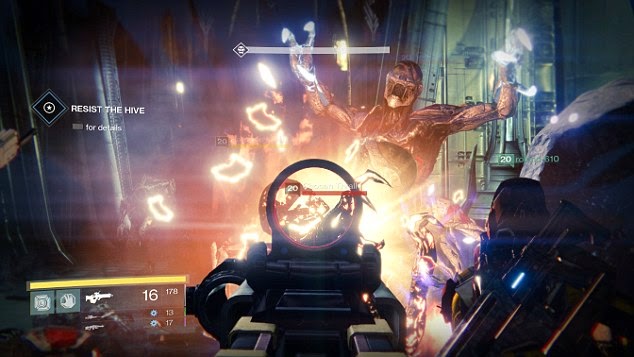 So Destiny is not perfect. First off the competitive multiplayer leaves a lot to be desired. It is unlocked in a strange way in that you only get 'capture the base' to begin with, you have to do a match of this before team death match is unlocked, and then after that free for all is unlocked. I played two games but I wasn't feeling it. While everyone is set to the same level in competitive multiplayer you bring over the weapons you are currently using in the main game and so there can be unfair advantages depending on what you have equipped.

For what at times feels like a MMO there is not too much content, I reckon it took me about 15 hours to do all the missions. Also the various planets you travel to don't really feel that much different apart from different colours used. The graphics are great, crisp and sharp and has me excited for what will eventually be possible on these new consoles but I sometimes got the same feeling I got in Rage - that these stunning locations are there to look at but not to interact with. I love the hub city where you wander around in third person talking to shop keepers and dancing at other players (as an aside). The best part of the game I have saved for last. There are a number of co-op only 'strike' missions in which you and two strangers take on a super hard mission that usually ends in a fight against a very powerful boss. I adored these strike missions, amazing fun (especially as there is no voice chat). Silently working together to take out enemies never gets boring.

I feel I saw most of what Destiny has to offer at the moment hence the review. There is a large amount of DLC planned to bring players back to the game world but I will wait to see what that is like before I choose to return. A much better game than Halo, and despite being shorter than I expected and having a frankly bare bones plot I had so much pure fun with this.