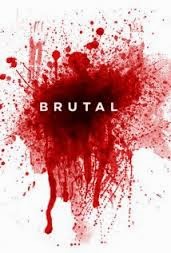 I mentioned Brutal before (here) where the official trailer was also shown. I now have some further details on this upcoming martial arts horror.

Brutal stars Morgan Benoit as Trevor; someone who is abducted by aliens when he was fifteen and forced to fight never ending fights against other abductees in a strange fighting arena. Two decades later and he has become transformed into a brutal warrior. It is said to be an allegory about man's violent nature.

The sci-fi element was unexpected but adds an interesting angle to what I expected would be about underground cage fights. The press release says it will have elements from both The Prisoner and The Twilight Zone which is kinda cool as those shows are very good.

Brutal is due to premiere at the Beverly Hills Samuel Goldwyn Theatre on November 5th this year. Looks to be ultra brutal!
Posted by Daniel Simmonds at 10:54