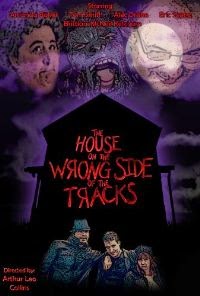 The House on the Wrong Side of the Tracks shares both title and the premise of home invasion with the likes of The Last House on the Left and The House on the Edge of the Park but takes a modern twist by being a film from the much maligned found footage genre. The film was apparently filmed in just 23 hours and I have to say this did set alarm bells ringing in the halls of The Rotting Zombie HQ as I was concerned how a film shot in such a short time frame could be any good.

Three scum bags; psychotic Ray (Eric Sopko), his besotted girlfriend Liz (Amanda Baker), and brother Nathan (Alec Drake) decide for fun they are going to invade the house of a middle aged couple and rob and trash the place. Also for fun they are going to film the whole event to watch back later on. Initially things go to plan but the arrival of the couples intellectually disabled son sees the tables turned with the invaders becoming prisoners of what turns out to be a very crazy family. 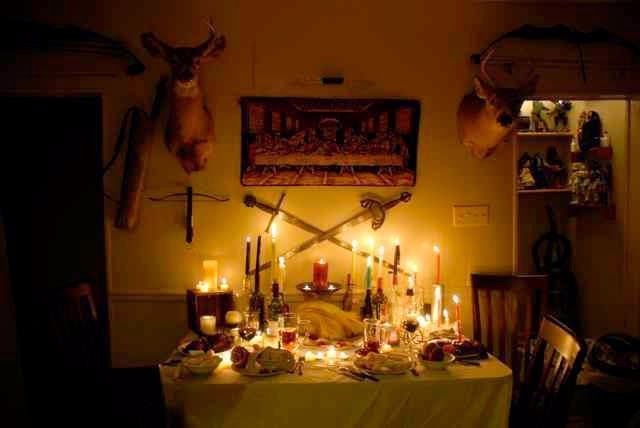 The first twenty minutes of The House on the Wrong Side of the Tracks actually really impressed me, there are long scenes without a break including a fantastic one in which the worlds longest train goes by all while Ray almost preaches about why he does what he does. The three delinquents have a certain charm to them and come across as a tight unit, Ray with his psychotic behaviour is a nut bag but all had a magnetic aura around them. The acting as I expected was not great but I was able to look past that for these three. It is just a shame that as soon as the home invasion begins the film starts to unravel.

I expect a lot of this film was ad-libbed, characters frequently stumble their words and over emphasise but this never bothered me. The introduction of new characters sadly ruins things. The middle aged couple whose house the trio invade over act a lot, the wife in particular I just did not enjoy. When tied up she looked like she was trying not to laugh, and throughout her hair looked like a wig that was distracting. No one seems sure of what to do once they are in the house, the three invaders are just kind of standing around while Ray shouts at his captors. When the three become prisoners this trend continues with the actors playing the family seeming unsure of what to do, obviously not wanting to actually hurt the actors playing the thugs they instead meekly push them around while shouting abuse which does not look good on camera. 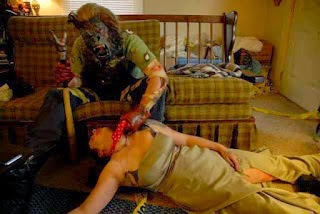 With the three now captive the film changes tack and goes on a misguided and sadly boring tangent of focusing on the family. Losing the most interesting characters was a bad move, it falls flat with the wind knocked out of the sails and never manages to recover despite an almost enjoyable finale. With feeble non threatening antagonists it falls down to special effects to save the day but again just does not excel. Some severed fingers and other body parts look quite terrible with virtually no blood to be seen at all. A body in a bath tub looked like a mannequin, I guess with the bizarre design of the house maybe it actually was. On that note the house is well designed, I approve of the look with so much clutter and detail (the front room full of TVs, the Star War dolls on the shelf in the hallway, great stuff!).

The influences that this film cribs from are plain to see, the huge son dressed up like a werewolf brought echoes of Leatherface, while the whole insane family could be straight from The Texas Chainsaw Massacre also. Meanwhile a later scene in which Liz apologises to her family while crying at the camera was a big nod to The Blair Witch Project. The house the film takes place around features a load of horror  pictures on the walls such as a drawing of a zombie from Night of the Living Dead as well as a poster featuring Planet Terror and Death Proof (I have the same poster in my house). It was cool to see these films displayed in the film but they did feel very out of place. 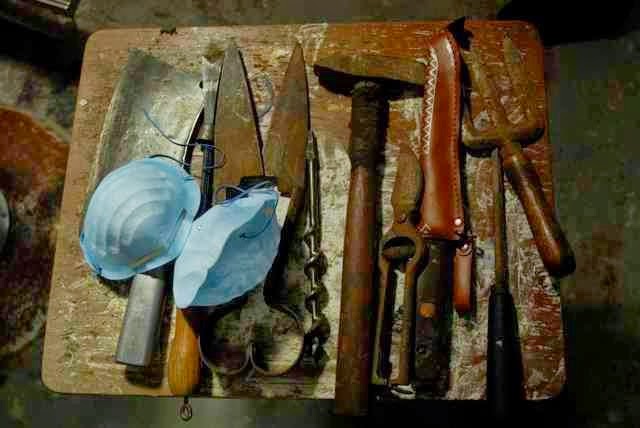 Filmed in Youngstown (the home of RagNBone Productions who produced this) and filmed in such a short space of time what was achieved is admirable. It was just a disappointment that the strong beginning was too much for the rest of the film to live up to and that the most interesting characters got relegated to the background in exchange for less interesting ones. A nice idea having the hunters become the hunted though!