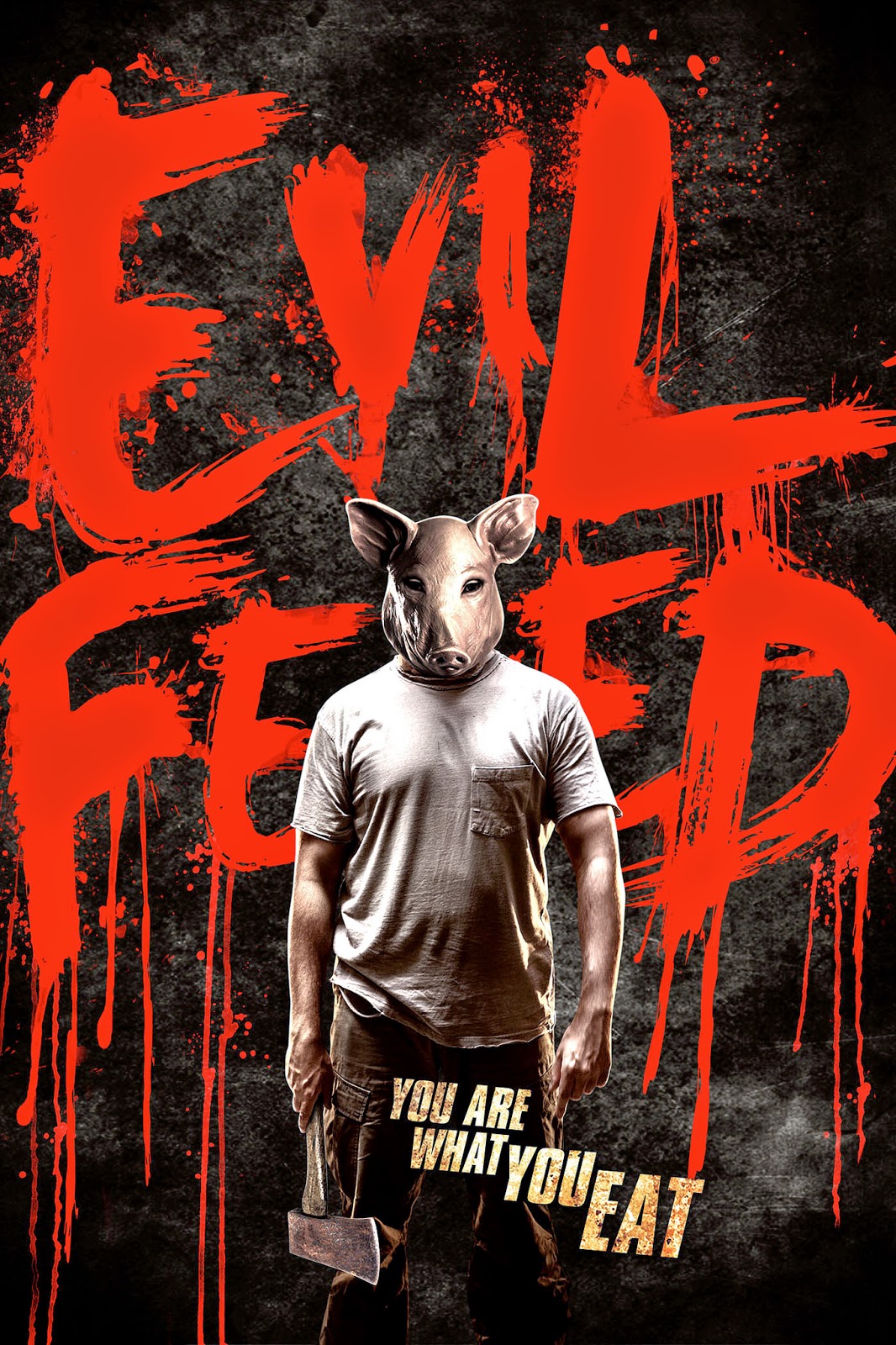 It's lazy to draw comparisons to explain a film but hell, I'm tired after a long day at the lab so here I go... Evil Feed is Hostel crossed with the very best of Jean-Claude Van Damme. Having recently covered this film in a news post (here) I received a copy of it for review and must say it was delightful to consume.

There is an exclusive secret restaurant named The Long Pig where the food served is all of a cannibalistic nature. Ruled by the psychotic Steven it aims to provide a range of services and entertainment for it's clientele. One of the features is what Steven calls 'tendertainment' in which kidnapped martial artists are forced to fight, if they loose they are killed and served up. One such fighter; Nash, and his girlfriend Jenna are captured along with Jenna's Dad and her sister. The father's students (Tyrone, Brian, and Carlos) discover the location of The Long Pig and head there with the intention of infiltrating the place and rescuing their friends and sensai.

Directed by Kimani Ray Smith Evil Feed is one gory film but all done in quite a tongue in cheek way. While providing horror and lots of martial art fighting there is also double helpings of humour, it really does not take itself seriously which is probably good considering the subject matter (the house special is called the Dicky Roll for instance, not hard to imagine what body part that consists of).

I was expecting something that looked like it was filmed in the back of a shed somewhere but I actually found myself impressed with the quality of the film, it all looks solid and while the relatively small sets do indicate a low budget this is more than made up for with non stop action and humour that even when it falls flat does not detract from the experience. It did fall flat a lot for me but I will also state that at least once I found myself laughing out loud.

The special effects are pretty good and are mostly used for the brutal fighting sequences. The fights are held in an MMA style ring and always end with fantastic finishing fatalities that could come straight out of Mortal Kombat, a favourite one was someone getting their face peeled off and then eaten by the victor! Punches really feel like they connect with lashings of blood and gore and a bunch of severed body parts by the films conclusion.

Along with all the bloody violence comes a fair bit of nudity. Now I have said before that I don't think naked females needs to be an essential part of horror films and far too often is used to titillate but here it just fits into the style of the film well, like a 70's exploitation film made for the modern day. It is pretty much essential for one scene that has a really gruesome pay off to it!

The plot is quite basic but it does do the job well, there is not too much depth to things, a mild sub-plot involving a rival restaurant owner boils along nicely while the main one is silly and fun. Main bad guy Steven is played manically by Terry Chen while his love interest crazed Yuki (Alyson Bath) nearly comes across as irritating but narrowly avoids it. The good guys are also not bad, at least hard man Tyrone (Alan Chanoine), portly Brian and maybe the main female lead Jenna have good parts. The acting all around really cannot be complained about. Even the not so good characters such as Carlos and wimpy Pete are let down not due to bad acting just bad uninvolving parts. The right people were picked for the right roles.

With a hell of a lot of fighting and a hell of a lot of violence Evil Feed was a real thrill ride that I really got into. Sure it is dumb and sure the humour is slightly off kilter but I found myself having a real enjoyable time. Evil Feed is released by Solo Media on 25th August on Digital (VOD) and On Demand, well worth a watch.

Posted by Daniel Simmonds at 13:29