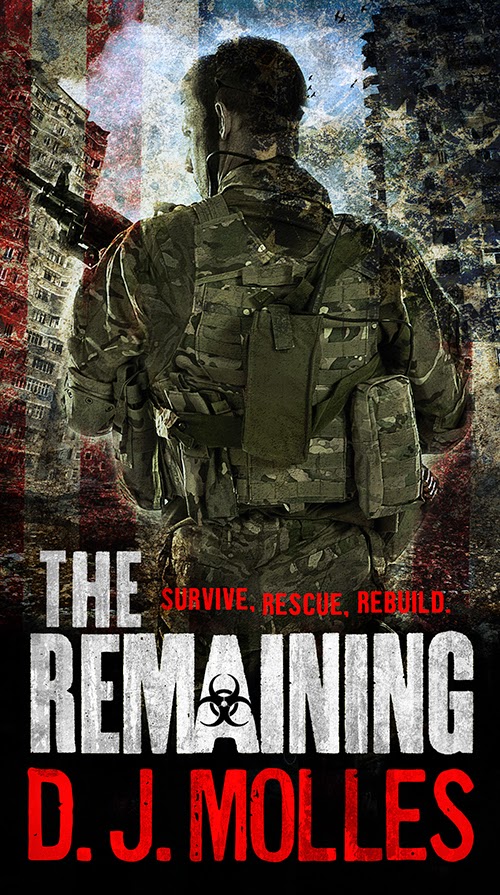 Originally written in 2012 ad self published The Remaining has this year been released by Orbit. Apparently in the two years since it was first self published it has sold 250,000 copies with four books written in the series.

U.S soldier Lee Harden waits in a bunker below his home, his mission to wait there until his superior gives him the all clear to head back to the surface, or if he looses contact with his handler for 48 hours he is to open his classified orders and proceed according to those. Many times before in his past he has stayed in his bunker, each time it has led to nothing and he is able to return to normal life but this time the unthinkable happens, Lee realises something truly cataclysmic has occurred. His classified mission speaks of a deadly virus that would have most likely decimated the population, turning the infected into people filled with utter violence. His mission is to establish contact with groups of survivors and with them help to reestablish law and order. Protected from this chaos Lee along with his trained dog Tango heads out of his bunker finally and steps into a dark new world.

I really loved how the book is set out, the character of Lee having been staying in his bunker for a month while the apocalypse happened means he is just as blind to the reality of the world as the reader, his bunker well equipped with food, water, medical supplies, weapons and other luxuries is a safe haven. His first forays out of this sanctuary are well written, suspenseful and scary. I wanted nothing more than to retreat back to Lee's base and stay locked away from the world. He is a good guy through and through with no suspicion as to any wrong doings, a cookie cutter hero but he is likable as a result and his drive to complete his mission is admirable.

Starting off the first third of The Remaining establishes Lee's role, his expertise and his judgement with scenes right out of action films as he stalks and hunts prey. In the world of the book surviving humans are far more of a threat than the sporadic infected. It seems everywhere you go hostile humans with evil intentions are never far away making the world a scary place. The human to infected ratio reminded me a lot of the game The Last of Us as here also the literal monsters of the piece take second place to hostiles. Events go by in a whirlwind and expectations are wildly changed due to a series of unfortunate events, also managing to mess with some classic horror tropes .

The infected are not zombies per se. Here they have succumbed to a virus that is slowly eating away their brains. Infected are feral, hunt together in packs and are full of rage. Ambling slowly until they detect prey, able to use basic weapons such as hammers and shovels, hard to kill and they are lucid enough to be able to dismantle barriers and hunt. The first appearance of an infected is wonderfully done demonstrating what a threat even one can be. The scenes with the infected are often exciting, a siege at one point led by a boss style infected really reminded me of Resident Evil 4's enemies, it read like a scene from a game or film, vivid descriptions really letting you visualise what was happening.

If I had a criticism it would be that it seems to end just as things start to happen, it is more of a prologue than a stand alone novel, something that is backed up by there being more in the series. Had I not known this I would have felt slightly cheated as it is not the longest book I have ever read (just over 300 pages with a large text size used). What is here is excellent and really easy to read and quite gruesome. I can't really remember a book where the essentials of needing food and water to survive are so at the forefront, here the lack of these have a noticeable effect on the key characters who are handled realistically and are all likable;  from the boy Lee saves to a mother and daughter that join him, they do not have much character to them but you do end up caring for them.

Sometimes a simple tale done well is worth more than a hundred convoluted plots. The Remaining while not doing much new still managed to keep my eyes glued to the pages, well written, interesting and left me really wanting to read more; a great start to the series.