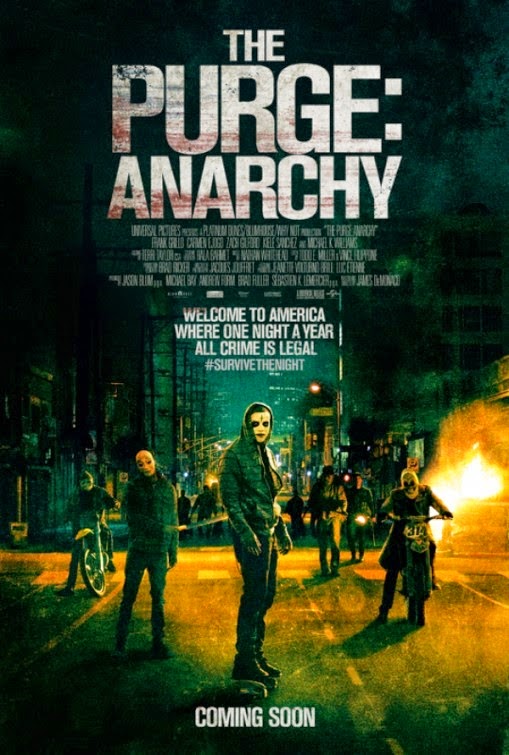 I must admit that I was more in love with the idea behind the first The Purge film than the actual thing itself. It was not a bad home invasion film but didn't really do anything new. At the time I thought to myself if a sequel was ever made then it should feature an entirely new set of characters, and that it should take place outside during the Purge rather than inside. Looks like someone was listening as that is exactly what has happened.

The Purge: Anarchy takes place in the future America of 2023. Unemployment and crime is at an all time low as once a year during the night of an event called The Purge all crime becomes legal. Citizens are encouraged to expel their aggression during this night of madness.  On the way home troubled couple Shane and Liz's car breaks down as a result of sabotage. They find themselves pursued by a masked gang downtown. Meanwhile poor waitress Eva and her daughter Cali become the target of a shady group of armed soldiers until they are rescued by a lone gunman who is out for his own reasons. The stranger agrees to help the group get to a safe location in exchange for gaining access to a car so he can complete his mission. Together they make their way across the city running a gauntlet of thugs and psychos as they go. 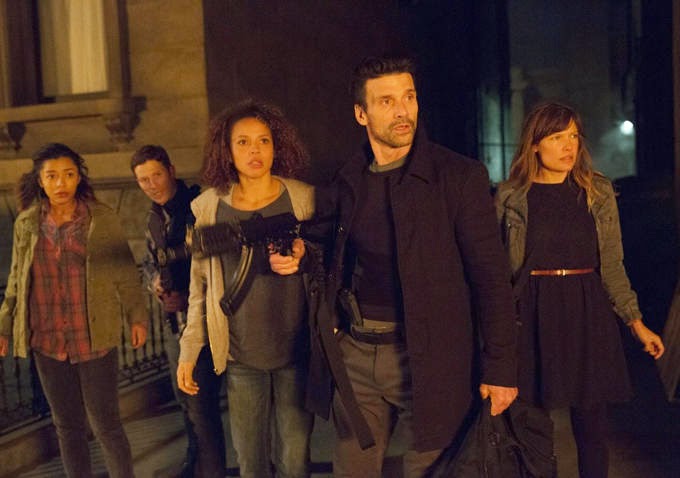 Anarchy far exceeded my expectations, it looks and sounds amazing and seems to have at least three times the budget of the first film. It steals ideas from a variety of places but joins them together to create a satisfying whole. A big influence seemed to be The Warriors, there are many different gangs roaming the streets, all with their particular style of uniform. The start of the Purge gives a montage of these different groups such as skinheads riding around in a school bus, doll mask wearing thugs on motorbikes, a lorry with a mini gun firing madman hidden in the back, lone snipers and more. It was a great sequence that really set up the tone of the film. The videogame Manhunt I was also reminded off, especially with the military presence that pops up now and again. I was also reminded of Battle Royale, Hostel, and even The Punisher in the form of the friendly stranger character (played fantastically by Frank Grillo) who drives around in an armoured car, has an over abundance of weapons and is dressed all in black with a great coat.

Initially this is very much a horror, the tense moments of the start of The Purge were just as effective and nerve racking as the first film. Knowing the characters have to survive twelve hours of this madness get you really worried for them. Later it turns into far more of an action horror with the hapless characters going from one bad situation to another. Being pursued down an underground railway tunnel by a loon armed with a flame thrower in a beach-buggy one moment to becoming stuck in the middle of an escalating family dispute the next; it never lets up. I was worried for the films end, I could not see how it could manage to bring the suspense and action to a fitting end but it was achieved. 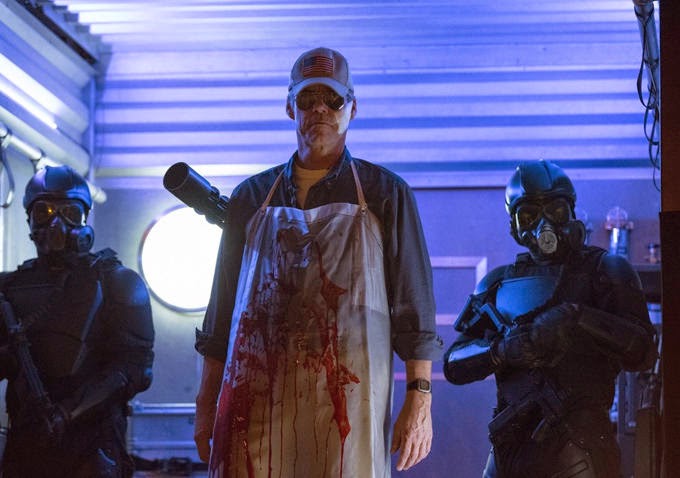 The overall message of the film is one of the rich benefiting from the persecution of the poor and this is very heavy handily drilled in, it is done in a fun way that makes you root for the rich to fail. A sub plot focusing on this was brought into the forefront in a way that was predictable but welcome. One annoyance of this film was that if I were in a world in which this murder night took place I would not be out doing food shopping a few hours before it commences such as Shane and Liz are doing, is a bit unbelievable so their introduction into the film was a bit far fetched, though other characters have a natural fit into this world. I did expect a big twist with the characters that never came so did feel a little under whelmed that everything is in fact as it seems on the surface.

Even if you have not seen the first film I implore you to check this one out as apart from a blink and you miss it cameo (I must have blinked as I indeed missed it) this has nothing what so ever to do with that and is a stand alone film in it's own right. By focusing on the poor instead of the rich, by being set outside rather than inside and by being adventure rather than survival this is a different and better beast than its predecessor. I really hope Anarchy is successful, judging by the packed cinema I was in things looks positive.