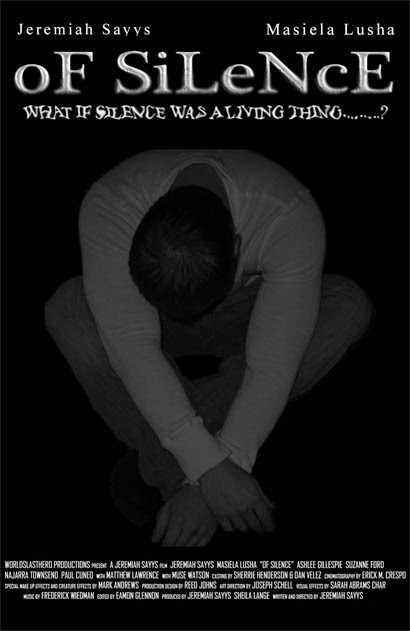 Of Silence is an Indie film that is written and directed by Jeremiah Sayys who also stars in the main role. It is described as a psychological thriller and it has to be said is a real slow burner. The whole thing was filmed in just 12 days with a low budget of $125,000.

Colby (Sayys) is a man deep in grieving after his wife has died. He no longer goes to work but instead stays at home where he is surrounded by memories of happier times, he mopes around the place remembering past events and generally not looking after himself with bills piling up and services being cut off. Soon he starts to hear strange voices, and witnesses unexplainable events. Is Colby going crazy and hallucinating these things, or is there actually a more sinister other worldly presence invading his reality, drawn to him by the deep sadness and silence he has come to know? 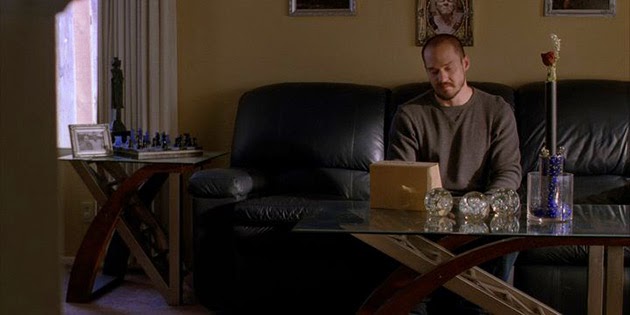 To start with I just did not get this film at all. The main character himself is obviously a very troubled and depressed man who has stopped living and instead just exists, a shell of his former self, unable to recover from the mortal blow his life has taken. Flashbacks throughout reveal just what occurred to get him to this point and it is all downbeat stuff. First and foremost this is a drama, the horror takes a back seat and even when it does rear it's nightmarish head it is easy to call into question if any of it is actually real.

To start with not much happens out of the ordinary; a few auditory hallucinations when his family visit for his birthday (a real fun time is had by all with his parents wildly over compensating for the fact Colby is pretty much a walking corpse). After the forty minute mark the hallucinations start to step up with his increasingly angry dead wife showing up to attack him verbally and physically, day and night cycles getting all mixed up and strange black smoke and shadow that seems to herald the arrival of madness. By the end I was so confused with the skipping around in time and weird events happening that I just shrugged my shoulders and went along with the ride, no longer even trying to decipher what on earth was happening. As the credits rolled I just thought to myself that there must have been something I missed as it was all so very odd. 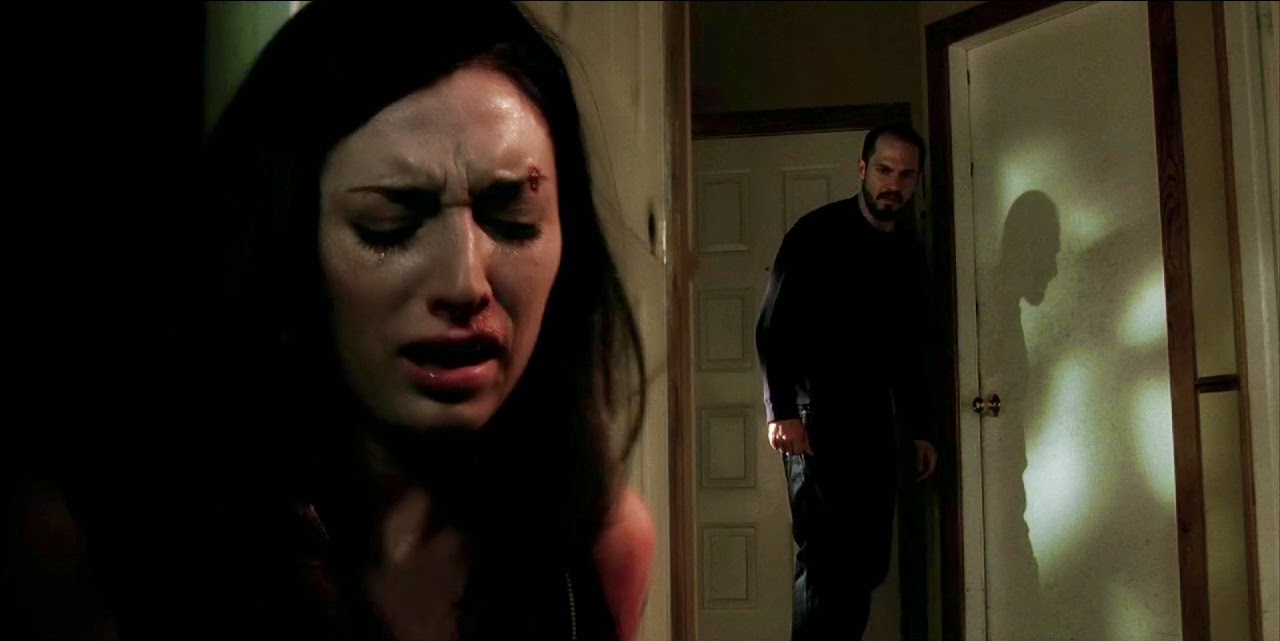 As a piece on grief and devastating loss it is well done, Colby has a permanent victim face and the way his house is lit with dark shadows and featureless scenery gel well with the feeling that was gone for. A few scenes are very well done, such as when in his back garden he encounters his wife in a flashback in the bright sunshine, yet at the same time he is there in darkness as his dead wife screams at him. The whole film takes place in his house and this deteriorates along with his quickening apparent madness with first the phone lines being cut off, then later gas and electricity (due to the pesky bills he is not concerned with) plunging his world into one of enforced solitude and darkness.

Of Silence looks great, the special effects are pretty damn good and the film is shot in a high quality, there is nothing bad that can be said of that. The acting is also not bad, Colby's family are fine even if his sister Haley comes across as a bit too naive for the age she is supposed to be at. The family don't feel that tight of a unit especially when all together. As mentioned the plot just left me a bit cold. After a point I didn't understand the motivations of Colby. All this really scary and strange stuff is happening to him yet he doesn't seem the least bit concerned about leaving the house, even when he is stabbed in the leg by a weird occult looking dagger by some unseen force he decides against calling for help and just pulls it out so that he can limp around for the rest of the time, apparently unconcerned about what is going on. 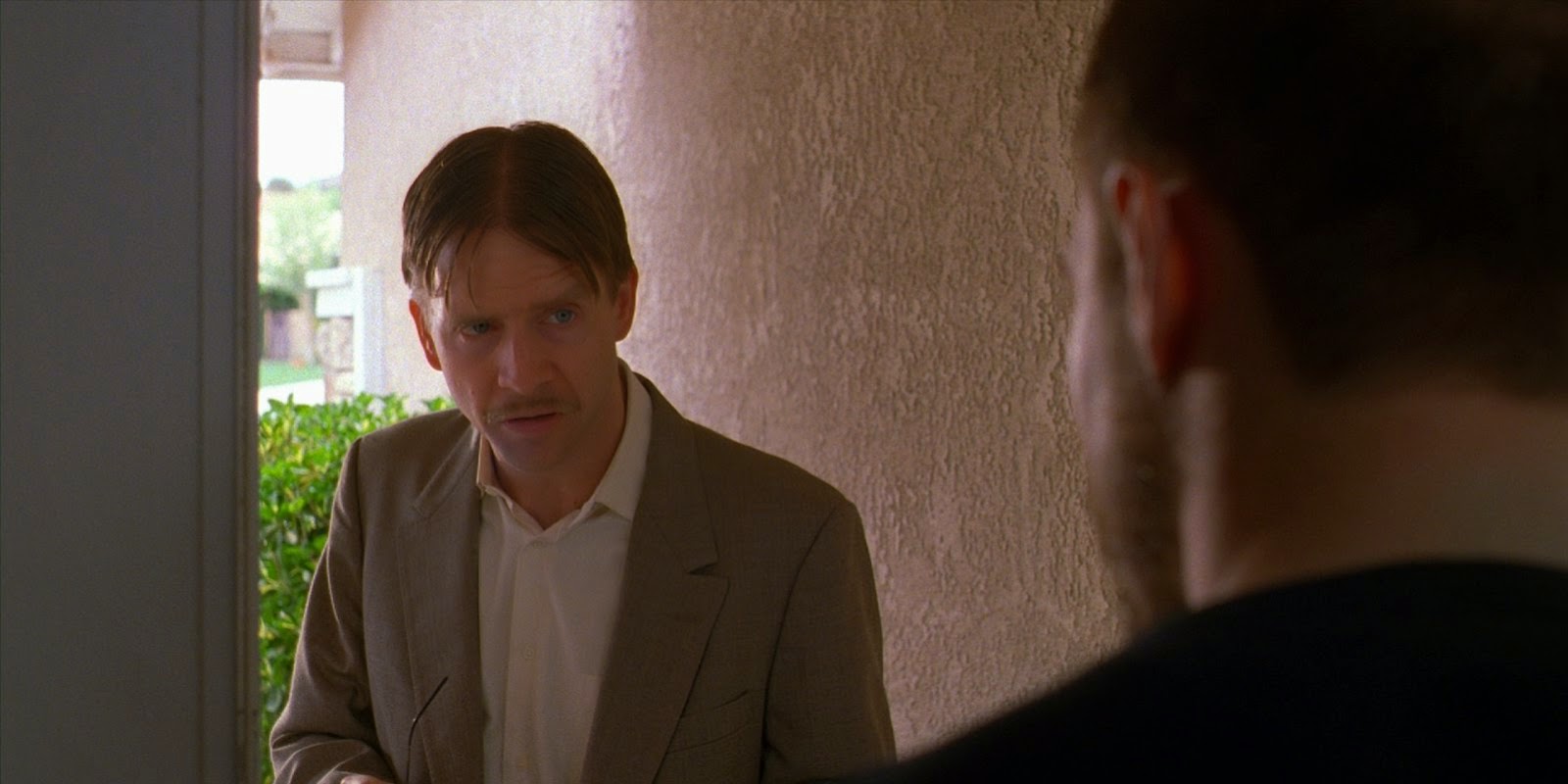 Two of the cast share surnames with Silent Hill characters (Ashlee Gillespie who plays Haley, and Najarra Townsend who plays Aimee) this is fitting as the film does have a very Silent Hill vibe going on due to the manifestation of evil seemingly appearing due to Colbys inner demons. Also Jacob's Ladder seemed to share common ground here. An interesting subject matter for sure but Of Silence is just a little too slow paced even for me who usually laps up films that take place at a glacial pace. A scene in which Colby searches for some batteries seemed to play out in real time over quite a few minutes for example (nitpicking I know).

I appreciate what was done here and it is very well made and directed, but overall I just could not get to grips with it and this lack of grip led to me not enjoying it too much, or really caring about the plot which is a shame.