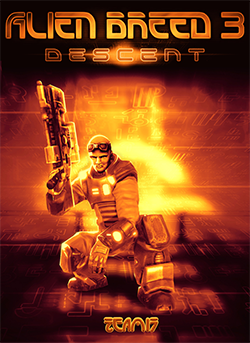 I have not done a blog post in a week, stupid insomnia and work really draining me. Still not great as am writing this review while slowly succumbing to the effects of some trusty Zopiclone, such is life! Alien Breed 3 is the third and final part in the revamped series and again is an isometric shooter. While the plot is hardly Shakespeare there will be some spoilers ahead as a warning.

Conrad is still on the ancient space hulk that the ship he was travelling on (the Leopold) got embedded in. With his friendly computer A.I taken over by the evil A.I of the alien infested ship at the end of the second game, and with both ships on a collision course with an icy planet things don't start off on a great note. More pressing then the impending crash though is that this evil A.I has dreams of bringing the horror of the alien menace to the entire universe via Conrad's ship, the Leopold, so he must find and destroy the A.I core before it can download itself into that ship and make good its escape. 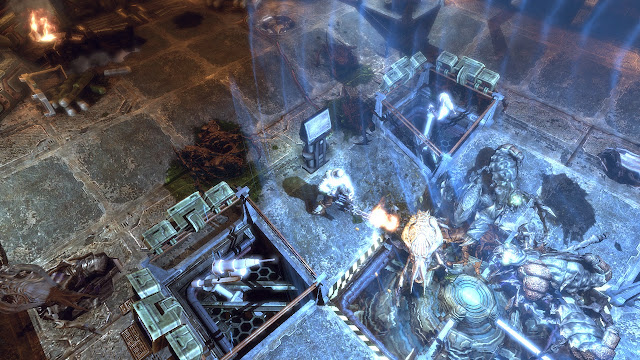 I don't know if it was due to the time that had elapsed since I played the last two games in the series but I found myself really enjoying Descent even if yes, technically it is more of the same. The evil A.I is a great character and the voice actor is fantastic coming across as a smarmy British guy, plus the logs that reveal backstory are actually interesting this time around and really give him some depth, with his story as a twisted scientist creating the alien creatures as part of a secret project before releasing them on his fellow ship mates, and becoming immortal by downloading his consciousness into a computer program.

The A.I's interactions with Conrad is constant throughout the six hour play time (again set over five levels) and forever enjoyable, threatening, shouting, taunting and offering Conrad the power to join up with him. Sadly it is all one way as Conrad's thoughts are displayed via lines of text that are totally out of eye view so I often missed them. The levels much like before are created as a series of almost maze like structures with switches and computer terminals needed to be accessed to bypass destroyed structures and blocked doorways. You are constantly attacked by the alien hordes who are here in much greater numbers than before, especially the last few levels were you are rarely given time to breathe as you come under constant assault from all sides. There are a lot more bosses in this third instalment, and while kind of formulaic are actually quite a lot of fun to fight. These bosses include a huge alien (obviously based on the Queen alien from those films) that keeps popping up as a recurring threat. 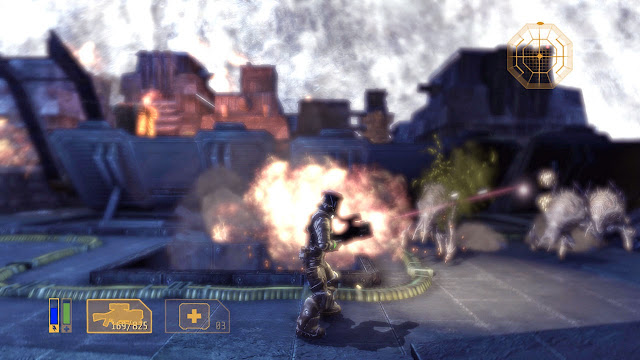 Water is the big innovation here and is used a hell of a lot in the rapidly sinking ship (spoiler zone: the ship crashes into an ocean on an ice planet). With this water comes a new type of electricity based enemy, as well as having the option to run taken away whenever you're in it (slowing you down as it does). I found the flooded areas quite fun as it was something different. Also something that seemed new were fixed angle sequences which were more cinematic than what I remembered previous. One in particular that saw you traversing the ships roof with magnetic boots and a space helmet really stood out. Unfortunately as much as I loved these new types of things I had really hoped I would get to leave the space hulk and explore the planets surface. Two whole games all set on the same ship was a bit too much really even if it was enjoyable. A couple of new guns are introduced but the assault rifle is still king.

This is certainly the hardest game in the trilogy but is the best crafted one and has the most new ideas. Some things still irritate such as the gun turret stations that technically you can use to easily fight the aliens, but the turrets themselves seem almost non existent in supply. With a great antagonist though this could actually be my favourite in the trilogy. Gone are the unsure baby steps of Evolution (though that had a great sense of place), thankfully ditched are the terrible babysitting parts of Assault. With less exploration and far more action it really is a close call. Basically if you have the other games and are unsure of whether to finish off the trilogy then I say yes, do that.