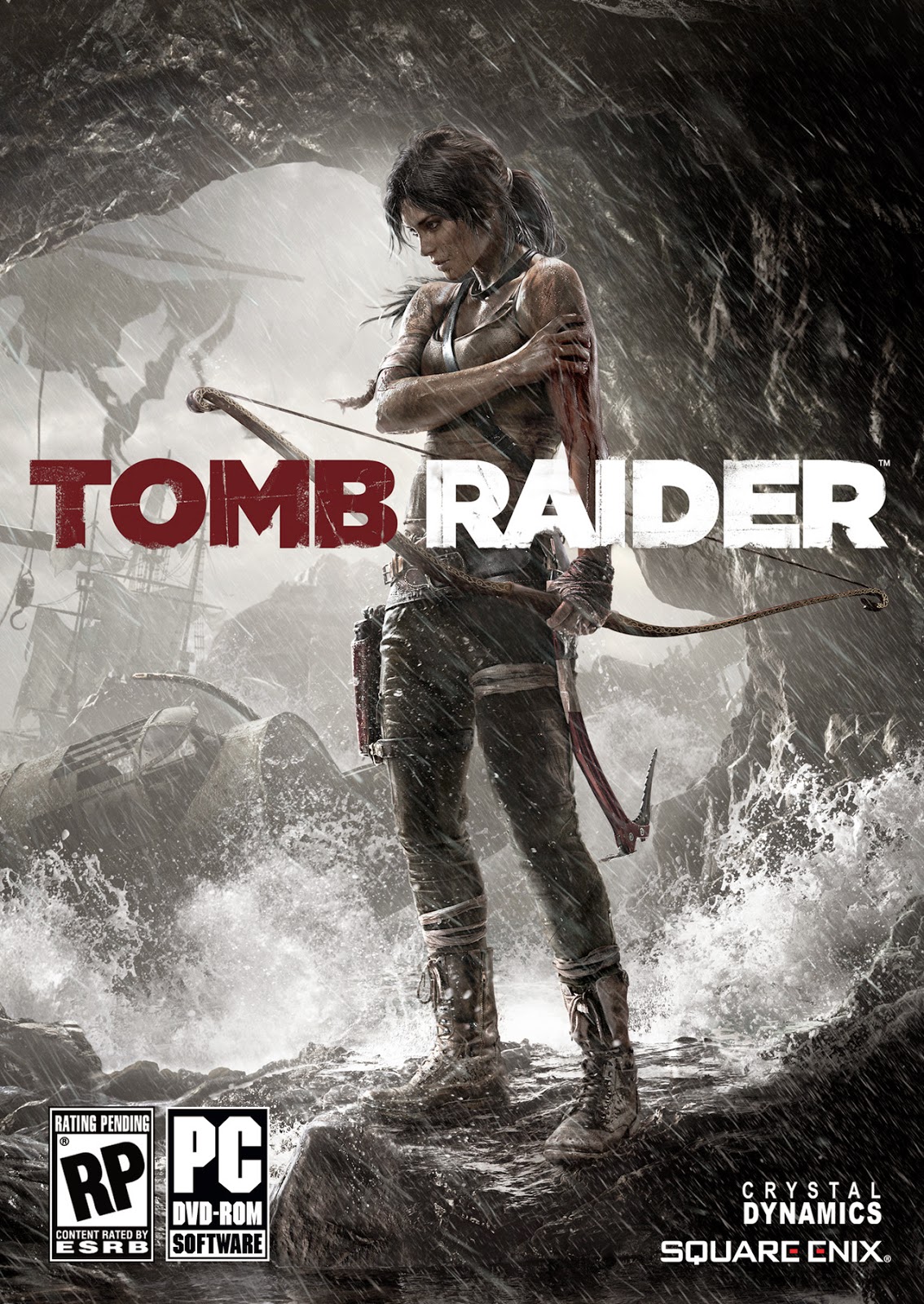 I picked up Tomb Raider for £5 a few weeks back, I had always wanted to play it, but hey, I just can't afford new games anymore. I really enjoyed the previous reboot of the Tomb Raider franchise but this new reboot goes even further away from old school Tomb Raider.

Lara Croft is on an expedition with some friends to discover the lost kingdom of Yamatai, she has a hunch it is located within an area of sea named the Devil's Triangle east of Japan. During the voyage a vicious storm appears, it destroys the ship she is travelling on and her and her colleagues all wash up on a strange island. Separated from the rest of the group (kidnapped by a cannibal as it happens) she escapes her captor to find the coast of the island is full of wrecks of ships and planes dating back hundreds of years up to present day. There is a strange storm that appears whenever anything gets close to the island, once on it it is impossible to leave. If things were not bad enough Yamatai (for this is where she has turned up at) is controlled by a murderous cult led by a deranged leader who worships an ancient dead Queen and who wants nothing more than to kill the new arrivals. 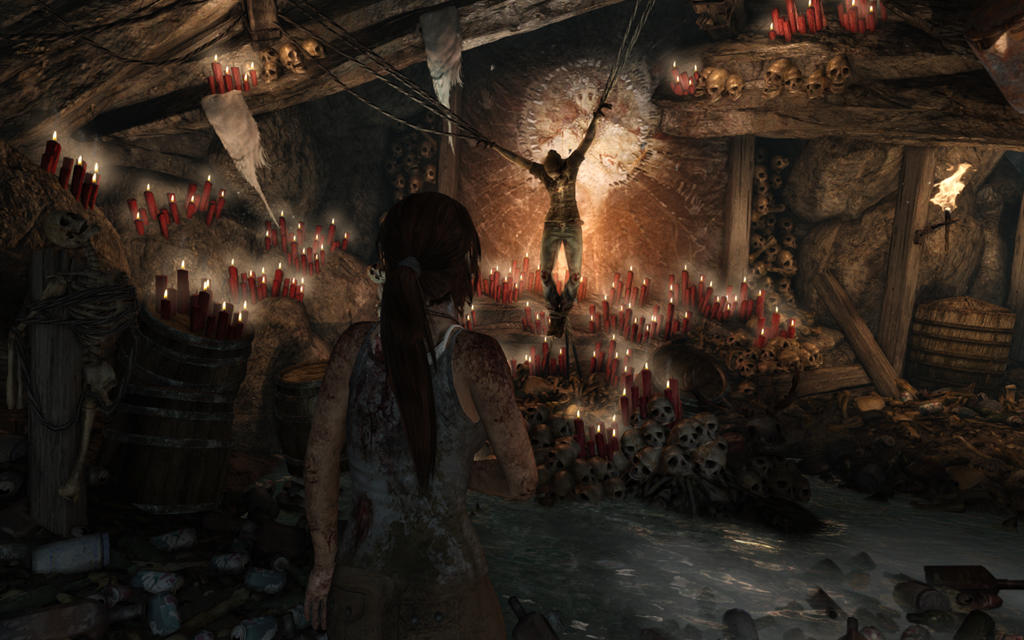 I loved this game, really loved it, the game plays out like a better Uncharted. Now I never minded those games but did feel they were over rated. Lara is just a better controlled character and has more to her personality. Being an origin story it charts the rise of her as a scared victim to a resolute heroine. It is a baptism of fire for this woman and the game does the great idea of changing her appearance as the game progress. Her clothes get torn, she gets covered in blood and dirt, she gets cuts and bandages, just brings a lot to the experience.

It wouldn't be remiss to call Tomb Raider a survival horror game, it is brutal, violent, extremely bloody and full of dark moments, from someone attempting to rape Lara near the start of the game things just get worse and worse, so much bad stuff happens to her. By the end of the game you have murdered hundreds of enemies, but this didn't detract from my experience, I never got the ludo-narrative dissonance that I did from something such as Bioshock Infinite. Criticised as promoting violence against women upon its release I disagree completely with this claim, nothing is glamorised here. The games world adds to the horror with thousands of corpses you encounter strewn about, hung up, and reduced to bones; a lot of people have been killed on the island. There is even a literal river of blood at one point! 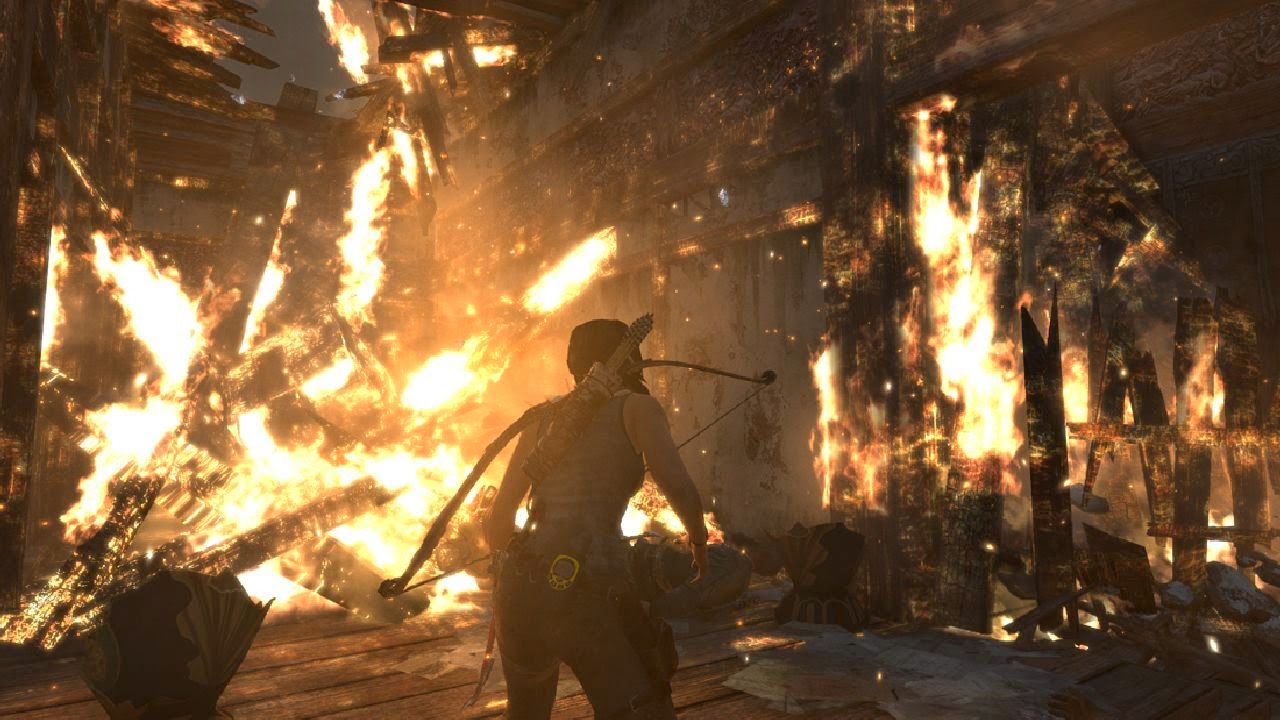 The island of the game is a wonderfully made construct that always feels believable, the game is semi linear as you are always barrelling forward but camp sites allow you to travel back to old locations if you so wish. Areas you visit are very big and open with multiple routes but it is always obvious where you should be heading. Hidden objects such as diaries and treasure are all over the game world, by finding treasure maps these show up on your map and reward you with experience (used to upgrade your abilities) as well as materials (used to upgrade your weapons). The way the game is paced I didn't really like to have to back track to go to previous areas as it all moves at such a lightning pace that it took me out the immersion to then break this flow.

The game world is very vertical, you clamber around objects much in the way of Uncharted, you can slide down ropes, climb cliff faces, and swing from poles. You get new abilities as the game goes on, such as being able to create your own rope slides. The other part of the game is the combat of which there is a hell of a lot. You get 4 weapons; shotgun, rifle, pistol, and bow and arrow that can all be upgraded. The bow in particular is used a lot for environmental puzzles due to it's fire arrows (that can also destroy enemy cover) that are usually simple but fun to do, a few times I got stuck on a puzzle for a bit especially in the puzzle tomb areas. Combat is of the cover based kind and in a novel twist you don't have to press a button to take cover, instead you naturally duck down when you get to some if there are enemies around. This was a great idea that other games should copy from. Bad guys can be finished off with brutal close range kills that range from jabbing an arrow into someones neck to executing them close range with your pistol. 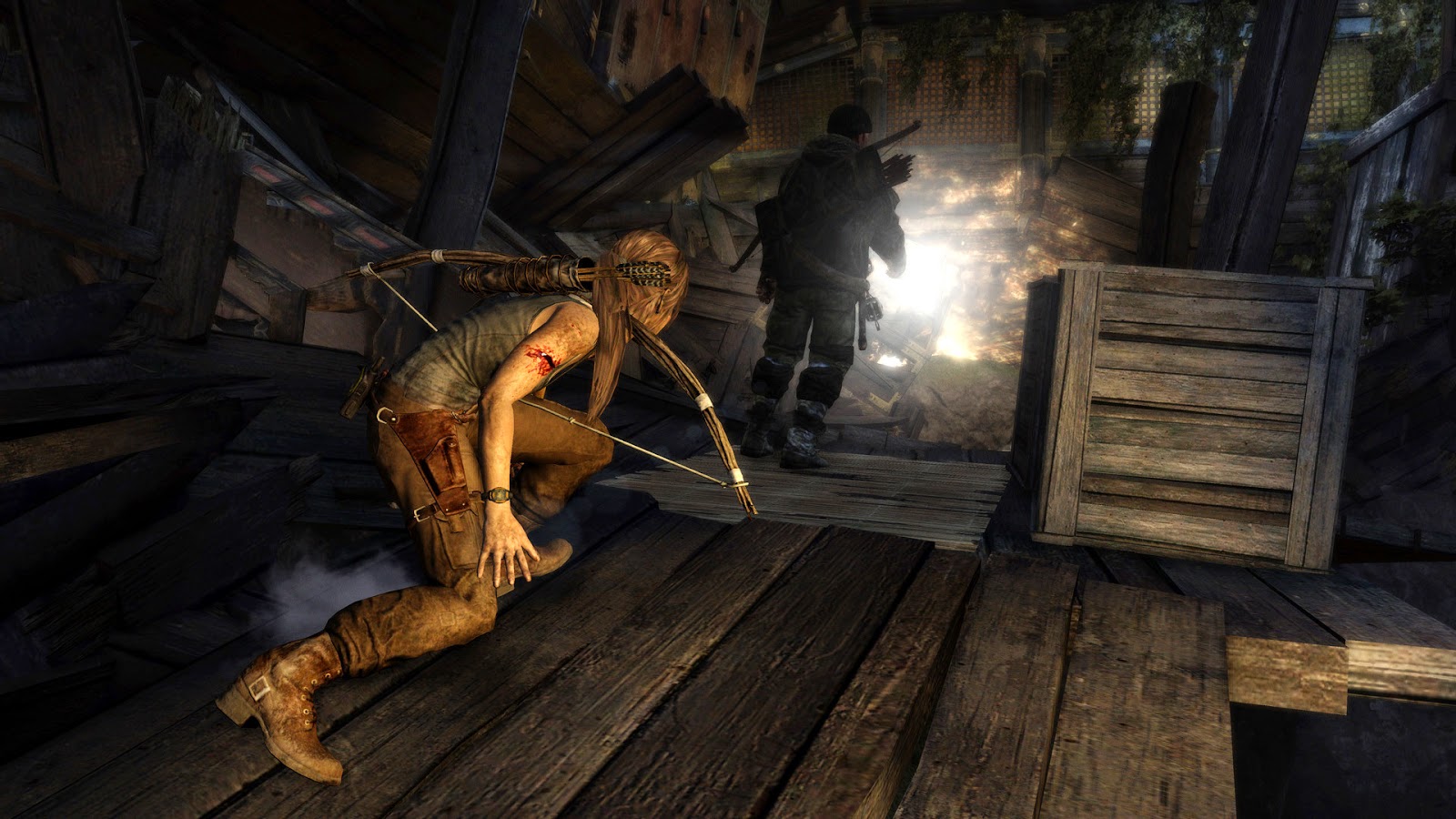 My favourite part of the game were the load screens...as in there are not any at all! Sure areas load as you walk down corridors but it is so expertly done that I never noticed, fantastic not having them (though dying and fast travelling use a load). The graphics are near stunning with the forests, bunkers, mountains and more all looking really good. Weather effects are also prominent with much of the game taking place in the rain that also looks great. The HUD is kept to a minimum only appearing small and in the corner when changing weapons, as such it just looks fantastic, it would have been nice to have the option of having the map displayed at all times though as I admit it is a pain to have to go onto the pause screen to look at it.

At between ten and twenty hours long this is a really long game which I really appreciated, at several points there are false endings that always delighted me when I discovered I still had a long way to go. Frequently splitting up the normal action are set pieces that usually involve you having to run whilst chaos happens around you such as a temple burning down, a cave collapsing, or a fantastic bit where you are on a construction that is collapsing all around. Artificial platforms in general are likely to collapse as you traverse them to keep things exciting. Other sequences include you getting caught in a trap and hanging upside down while being attacked (The Last of Us also did this), sliding down hills, and more. Thankfully there are no bland turret sections and while the game does feature QTE's these are always simple and infrequent. 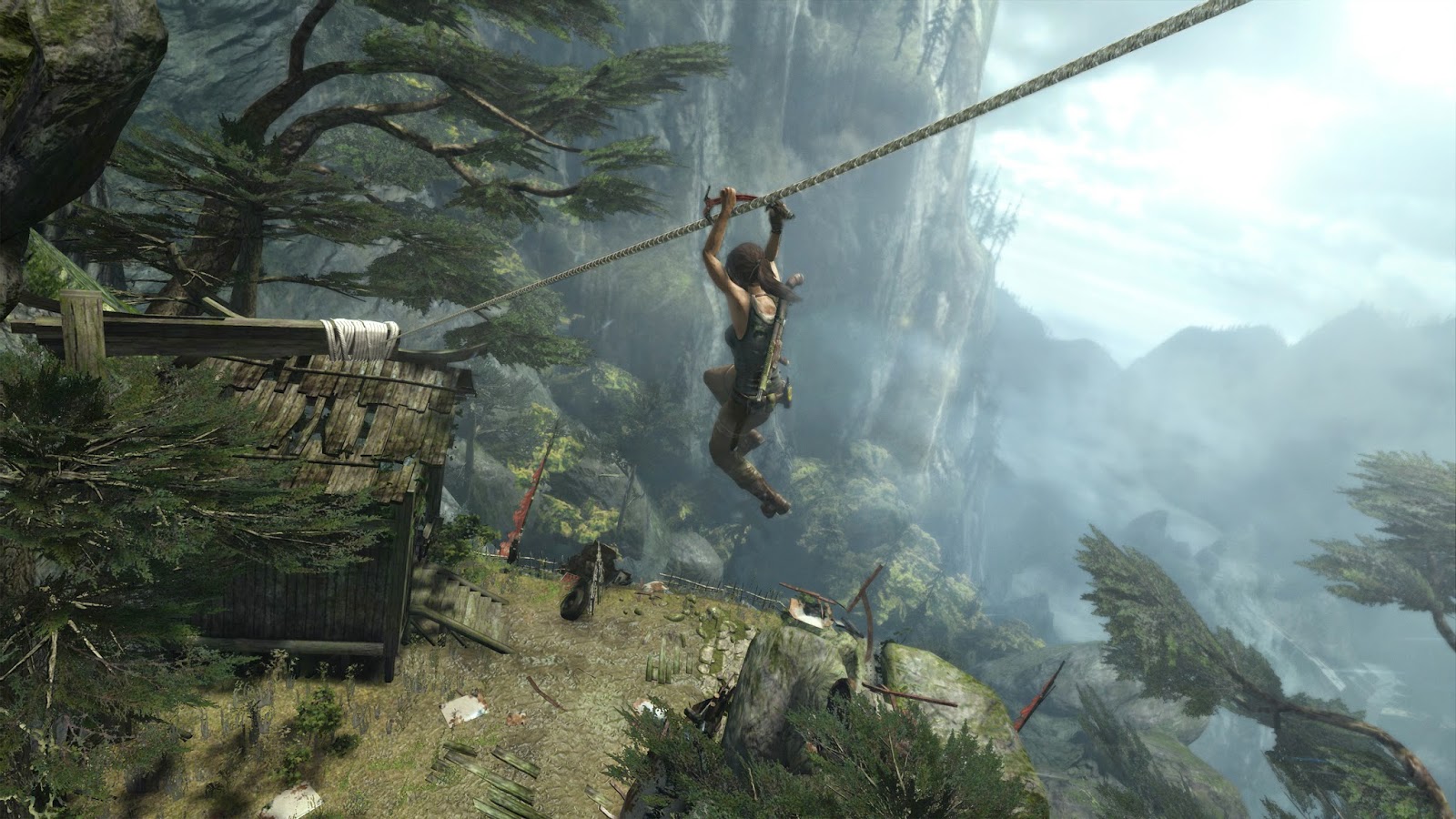 I was quite simply unprepared for how much I liked this game, everything from the plot (simple but effective) to the way the game is laid out, and the sublime way Lara controls made this a joy to play. Well worth a play, there be fun here!