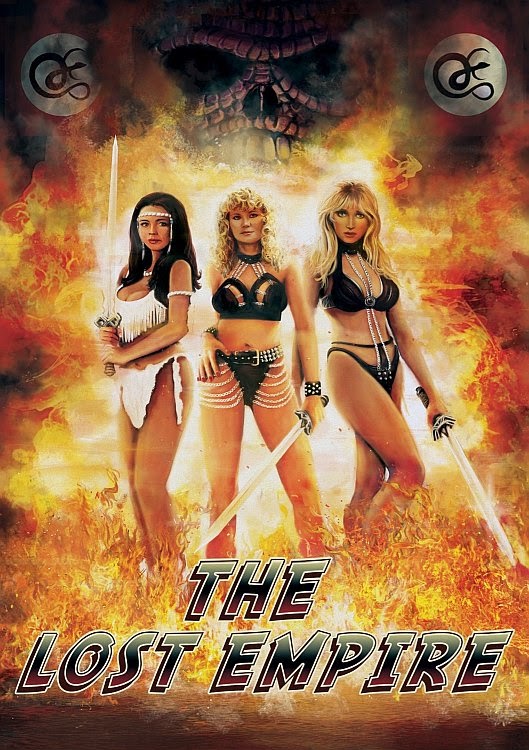 Well The Lost Empire is certainly no horror film, but what it is is a prime example of an 80's B-movie. Originally created as a tax loss but director Jim Wynorski in his first directing role didn't know this and so tried to make a great film with the small budget he had.

It starts with a robbery at a Chinese jewellery store by 3 costumed villains looking like Foot Soldiers from Turtles. Their robbery of an ancient jewel via use of magical shurikens is thwarted by the arrival of police that results in everyone being killed, one of the officers surviving long enough to give his bad ass older sister (also an officer) one of the shurikens. Her boyfriend; a clumsy Detective recognises it as belonging to an international terrorist organisation whose leader Sin Do (played by The Tall Man legend Angus Scrimm) is allegedly in league with an immortal wizard Lee Chuck who must kill someone every day lest the Devil appears to claim his soul. Wanting vengeance for her brothers death she recruits American Indian Whitestar (Raven De LaCroix), and convict Heather McClure to head off to Sin Do's remote island fortress where he regularly advertises for female warriors from around the globe to join his organisation. 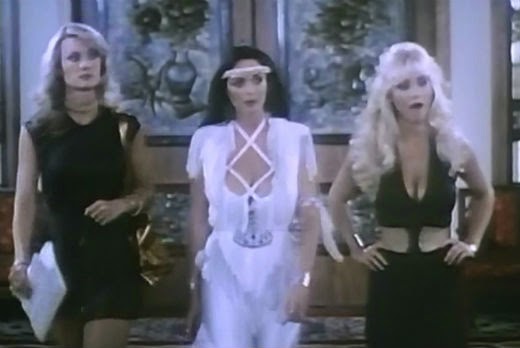 This is B-movie in every sense of the word. Dodgy acting, awful special effects, and the fantastic cheesy soundtrack along with a bananas plot that doesn't make that much sense. It could also be seen as a female exploitation film as every single female is either half naked, wearing very few clothes or has a giant cleavage, the film even opens on an extreme close up of a woman's bust. With the exception of a few people on the male side the men are fully clothed, most wearing face concealing robes. The main female leads are strong women though, very capable and skilled fighters and full of quips and belligerence. Some racist tones such as Whitestar who never stops making insensitive jokes about American Indians such as saying at one point the place they are staying at is preferable to her wigwam.

There are some real bad special effects but at times it can get quite good. The initial robbery scene is by far the most violent scene on offer, it was kind of a shame that there was nothing really to match that scene in terms of not only outlandishness but also in gore and brutality (someone later on does get a sword stuck through their face which was fun). Magical effects are obviously added later and look abysmal, while sound effects are very over the top and out of place. 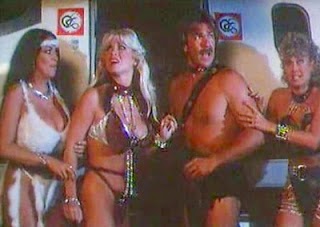 B-movies can often get bogged down in long, tedious dialogue scenes but here these are kept to a minimum with the 3 main females for the most part content to reel off lists of one liners that are always terrible. The film moves along at a moderate pace and never takes itself too seriously at all, even throws in a man in a gorilla suit for good effect, and starts with a screen of text which is also a staple of B-movies I have found out. It is fun to see Angus Scrimm as bad guy Sin Do though he doesn't get much screen time.

The Lost Empire and its island of soldiers reminded me a bit of classic James Bond films, even a bit of the first Mortal Kombat film. While it is not a classic and looks and sounds terrible with bad audio mixing and poor picture quality there is plenty of eye candy if that is your thing, and is a prime and watchable example of an old school B-movie. The DVD release includes a commentary as well as trailer and cast biographies.