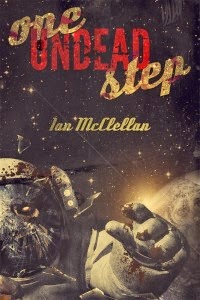 In 2012 I reviewed Zombie/Apocalypse 2012: A Political Horror Story, now the author Ian McCellan has another semi humorous zombie story released which is not related as far as I can tell and takes place in 1969, though not in space as I had originally assumed. I read the E-Book version and I readily admit that I really struggle with reading books digitally!

Film maker Mark Matthews is visited by the military whilst he is under arrest for having sex with an under-age girl. They request his assistance in making a special film, if he complies his charges will be dropped. Taken to a secret location he is tasked with making a film that shows the apparent Apollo 11 moon landings. He discovers the whole Russian and American space race was actually created as a distraction to the populaces of both countries to hide the fact that a zombie apocalypse was occurring. Meanwhile in an American city Will a barman and a bunch of other people band together when the undead start roaming the streets. Joined by some soldiers as well as some local gangsters together they try and find a way to escape the hell the place has become.

The sub plot of faking the moon landings was an original hook that I found out after the fact was based on alleged real events. In reality Stanley Kubrick was rumoured to have been hired to create the moon landing footage (just watch The Shining; it is full of references to Apollo 11) so that was a cool idea to use. This really was a minor subplot with very little book time devoted to the subject but by far the most humour comes from these scenes such as the incompetent actors Matthews is forced to rely on.

Where McCellan's previous zombie tale was like a road trip and focused on just the one character here it is almost the opposite. The majority of the book takes place in the one street of the city, a lot of this contained to a block of buildings. Many characters are used this time around, at first almost too many as I found myself getting confused a lot, as is the case with zombie stories the amount of people is slowly whittled down to more manageable numbers. McCellan doesn't pull any punches when it comes to the characters that get killed off, in fact he seems to revel in ones you would usually assume to survive being taken out. All the characters here are dysfunctional in one way or the other and none of them are perfect, drunks, gangsters, soldiers and one messed up family, out of the main characters none of them are bland and lifeless. The book is told from many different perspectives which keeps things feeling fresh.

One Undead Step is certainly a more serious story, the humour takes a further back seat than before with some real gruesome scenes occurring, and themes of sexual deviancy that keep popping up. The main story is almost a spoof in the bad luck the people get into, forever going to shop after shop almost like a commentary on the capitalist nature of Western society (maybe I'm reading too much into that!). Along with the moon landing sub plot there are other smaller ones that crop up that usually paint a scene only to then have the character introduced brutally killed that was just a bit too grim and didn't fit that well to the over arching story but interesting regardless. Deaths in general are well written though and usually feature the last thoughts of the victim just before they die that was a fitting send off for each one, also loved how the drunk characters really mess things up for the others!

The zombies of this book are runners, and seem more pack inclined with them reacting to noise and attacking relentlessly in order to get to their food source (living beings of course). Due to being in mobs for the most part these sections are always quite exciting. I could really picture the locations the book went to so quite vivid descriptions. I was impressed how McCellan manages to subtly morph unlikeable characters into people you actually care about as the book goes on

There is a lot to like with One Undead Step, it could be argued that it does not do too much new to the traditional zombie formula but the writing is consistently good and I really got hooked once it got going and some of the excess characters were culled. I look forward to McCellan's next book to see where he goes next.

Posted by Daniel Simmonds at 08:51