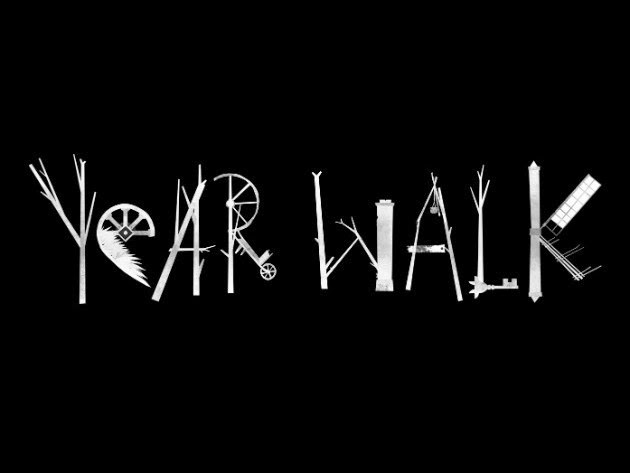 Year Walk is a unique looking survival horror that originally came out on i-OS devices. My friend was kind enough to buy it on her phone for me at the time but apart from one session on it I never actually got that far. Now I have my own i-Phone I just had to check it out.

Year Walk is a Swedish tradition in which someone who has been fasting would then go out on the last night of the year and walk through the woods in order to gain knowledge of what the future would bring. The process was said to be very dangerous as you would reveal yourself to spirits that may not take kindly to someone trying to find hidden knowledge. In the game you play as one such person. After visiting your girlfriend at a mill (who warns you of the danger of doing a year walk) you head back to your house, emerging at midnight, setting out into the black of night to find answers. 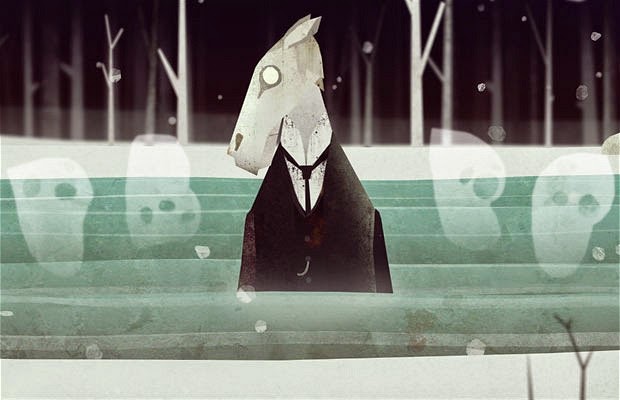 It is a adventure game of sorts in which in a first person perspective you move left and right through woodlands, while swiping with your finger to travel up paths. The game has a very unsettling visual style to it, kind of like if South Park became a serious horror show. Solving five main puzzles arcs, each related to a different Swedish mythological creature or being (the Huldra, the Brook Horse, the Myling, the Night Raven, and the Church Grim) it is a unnerving experience, and has quite a few jump scares. The puzzles are inventive and involving lots of touch commands. For example you see a large stone with a thumb print on it, by putting your finger on that part of the screen and holding it a doorway is revealed, another puzzle has you needing to follow a woman through the forest, multiple exits seek to trick you but the tone of a note that plays as you approach each one informs you of the correct approach.

I actually completed this game in less than 45 minutes, I somehow just never got lost at all, was a natural progression and I am kinda glad I didn't get stuck but it made the game over all too quick. Luckily there is some replay value. A free companion app is available that not only gives you information on the myths covered in the game but also has a secret part that consists of a lot of diary entries of a man researching the year walk idea which was very interesting and adds to the game a lot.

Year Walk is a must play if you own a i-Phone and like horror (also due out on Steam I believe) but be aware that it can have a short run time if you happen to stumble upon the right solutions to each of the puzzles. Still, not much like it around.