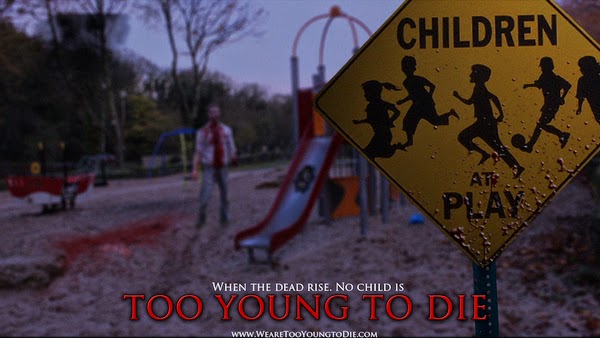 Indiegogo campaigns are not exactly a rarity but any opportunity I get to write about zombie films I will, especially ones filmed in my native homeland of Blighty. Too Young to Die is one such project I was made aware of, it has an optimistic goal of raising £500,000 and currently has £215 of that with 10 days left to (Indiego)go.

This film is shown from the perspective of a child whose small North English home town becomes the centre of a zombie outbreak after a train carrying most likely suspect cargo crashes nearby. With all the adults gone it is up to the survivors; all consisting of kids to find a way to survive the horror.

It would be interesting to see just what danger children can face, kids being killed in zombie films and in films in general is a very rare thing so it would stand to see if there could be any terror if this taboo was not broken much. The idea kind of reminded me of The Walking Dead Telltale adventure game and if it could make you care even 1/10th of the amount that game makes you care about young Clementine then this could be good.

Anyway I guess that is a moot point if the film doesn't get created. If you fancy donating some cash to this project then head over to the Indiegogo page where there is a variety of rewards based on how much you are willing to give. Check out the mellow teaser trailer below to see if this might appeal to you...