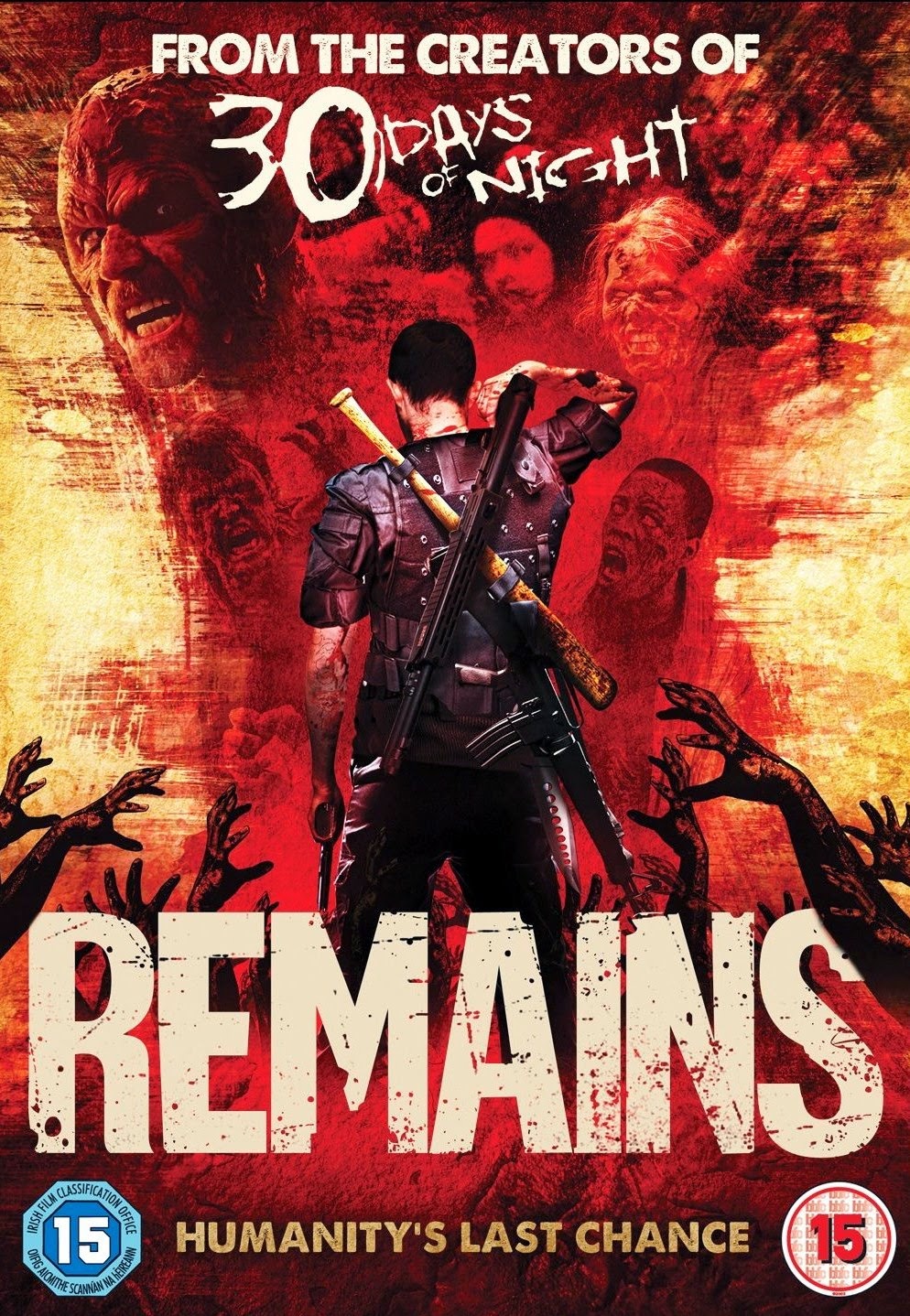 Remains was originally a comic by horror genius Steve Niles. I own the first two issues but missed out on the subsequent three so have been itching to watch the film version for months now to find out what happened.

Remains takes place in Reno, USA where a nearby test of a chemical solution said to completely dissipate nuclear waste results in apparent world wide zombie Armageddon. Tom (Grant Bowler) and fellow casino/hotel co-worker Tori (Evalena Marie) escape the worst of the blast as they are in a stock cupboard being 'intimate'. Also saved is hotel magician Jensen, and cowardly Victor. After weeks of time wasted getting drunk in the hotel they finally decide they should try and escape and find somewhere save from the hordes of undead. With salvation appearing in the form of a group of a well armed travelling militia they plan to make their escape...does anything ever go that easy though? 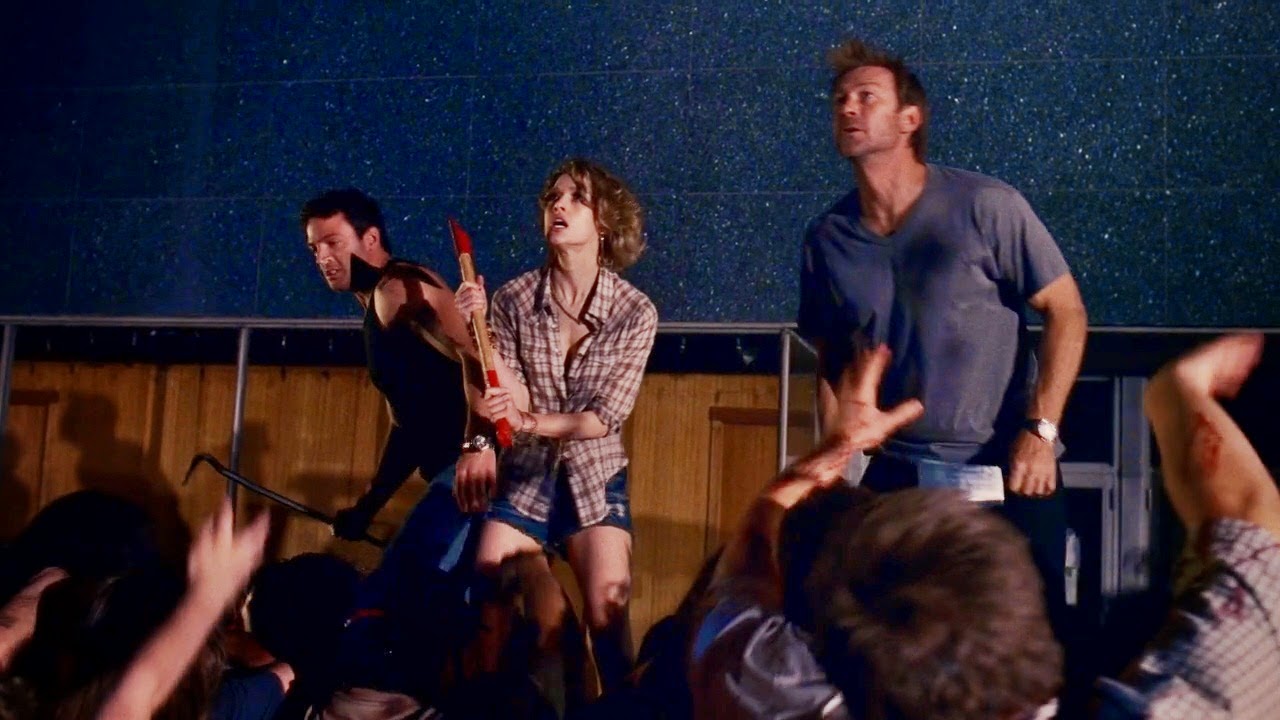 The limitations of Remains budget are always readily apparent, mostly rearing it's head in the form of badly made up zombies and ever present CGI for outdoors scenes. A car crash in particular looked like the fakest thing I have seen north of the borough of Faketon. There is no doubt at all watching this that it was meant for a DVD release and nothing more.

From what I read of the comic this features several scenes that I remembered so I assume it most likely follows the course of that story. Mostly it is about the characters attempting to escape the confines of the hotel. A plot involving militia proved to be a red herring, and maybe it was the narrow budget but the pay off of that particular storyline occurred offline. There are some really neat ideas here that elevated this from purely mediocre. First of all the zombies of this film are not purely after living human flesh. The zombies here eat anything including normal food, other zombies, and even themselves which does not sound that big a deal but you would be surprised. Also another neat twist was that the ghouls sleep at night, they sleep where they stand which leads to a frankly awesome sequence in which the survivors attempt to sneak past, at least one point I visibly jumped during that part! 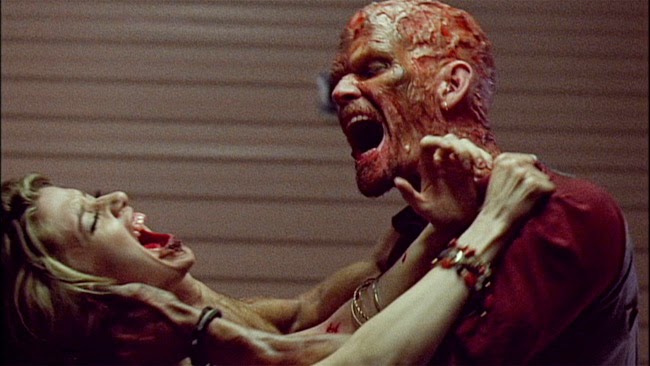 So the faults then? The CGI as mentioned is humiliatingly visible, the zombie special effects really are not great, most the zombies do not look too different to normal people though I did appreciate they have normal strength so even normal windows pose a problem to them (something I always try and convince my dear best friend would be true in a realistic zombie outbreak). The film is meant to take place over a few weeks but it does a terrible job of conveying this, it is only after a character mentions that it has been a few weeks that I knew for certain. Also the zombies are meant to be getting smarter and more dangerous as time goes on (big shout out to David Moody's Autumn series that also had this element!) yet the film does not do a good job of demonstrating this. The main characters are not that well developed, Remains the film features several characters who were not in the original comic series yet even the characters of that do not have much depth to them.

There are some scenes here that really elevate Remains from merely average. A hilarious scene in which some character attempt to escape an underground car park via a smart car was a real highlight, not knowing the code to open the shutter doors to the garage Tom shotguns the keypad (which in films usually results in the door magically opening) instead of opening it leads to a genius conversation of:
"What the hell did you do that for?" "...I don't know!"
That and several other scenes of inspiration lead to something that while in no way a great film does create a fun zombie flick that is worth a watch if you don't particularly care for quality. 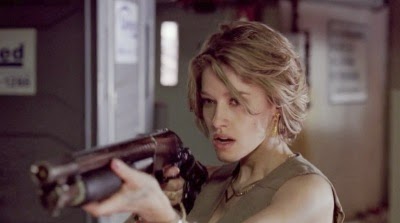 I was drunk while watching Remains, and it is a core rule that I should not watch a film for review while under the influence of anything but I think the fact A) Had fun with it after a hell of a bad day B) Did not think it was the best thing since (over rated) sliced bread that my review still stands. Worth a watch if you are not expecting the Shindler's List of zombie films.