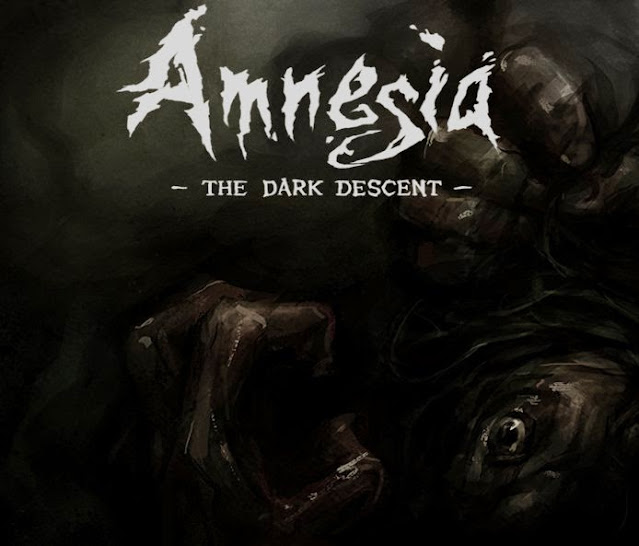 I heard Amnesia: The Dark Descent was a scary game, this made me excited to play it as scary games seem to be rare nowadays. Finally with a laptop able to run it I eagerly gave it a go.

Amnesia is a first person survival horror in which you start the game in a strange castle with no memory of how you got there, or who you are other than your name; Daniel. A letter near where you lay is from your past self, it instructs you to head to the inner sanctum of the castle and kill a man called Alexander. As you explore the castle you start to remember bits of your past that involved finding a mystical orb in some ancient ruins, and an unspeakable evil that is hunting you down as a result. 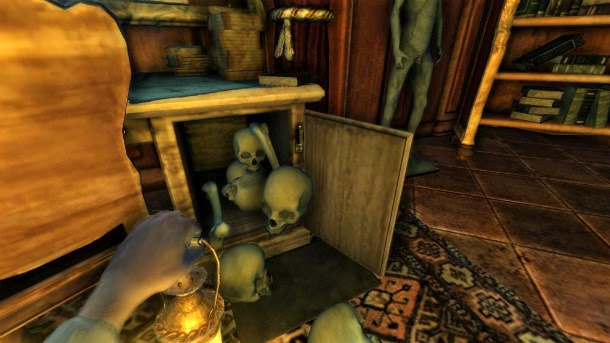 Amnesia is set during the last third of the 19th century, as a result there is non of the modern tools you would usually find in a survival horror. In fact there are no weapons at all in the game, upon discovering a monster your only option is to flee and hide. Darkness drains your sanity meter, the longer you spend in darkness the more you begin to hallucinate. To combat this you have a torch that must be kept topped up with oil, and there are hundreds of wall mounted torches and candles around the castle that can be lit.

Initially I was concerned by how much variety there would be in the games world. The castle is not particularly special looking and truth be told kind of bland. There are various areas of the castle including prisons, sewers, and living quarters but none of these locations were interesting in design. The main bulk of Amnesia is solving simple puzzles that can be anything from piling up a load of boxes to reach an out of reach platform, or throwing a rock at a suspended chain, or collecting various items for use on a particular thing (such as using a hammer and chisel to break a floor open). More interesting are the various documents spread around the mansion. A lot of these are diary entries from your past self that give context for what has happened, also a cool idea were that loading screens provide back story. 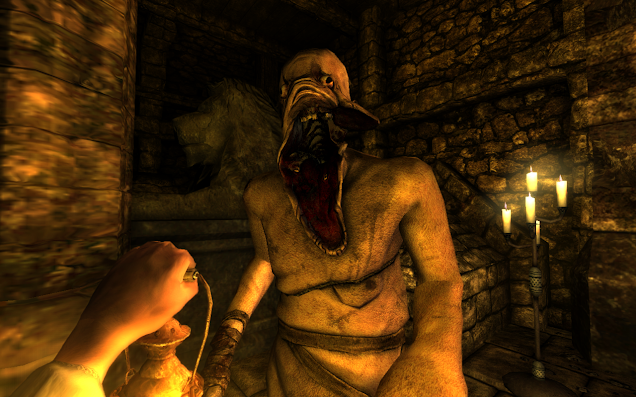 I played this in the dark with headphones, and at night where possible but I just did not find it that scary. Sure random walls collapsing in the distance freaked me out slightly, but the atmosphere just wasn't there for me. Darkness irritated more than frightened, and this went for the enemies too. A cool twist is that even looking at the enemies drains your sanity meter. They themselves were not that well designed and didn't inspire fear so much as annoyance when they killed me. A few chase sequences were more fun, one that had me desperately slamming doors shut behind myself as I ran was cool, and a brief jaunt through some flooded rooms where touching the water alerted an invisible monster to my location was good.

I think my problem is that so many people had said how scary this game was that I hyped it up too much in my head. I had fun with Amnesia: The Dark Descent but it is not a game I could see myself going back to. The story whilst straight out of a H.P Lovecraft tale just did not engage me, I did not find it that interesting, especially with such terrible voice acting. Not bad, but certainly not the classic it has been made out to be. I wanted creeping dread and instead got occasional thrills.