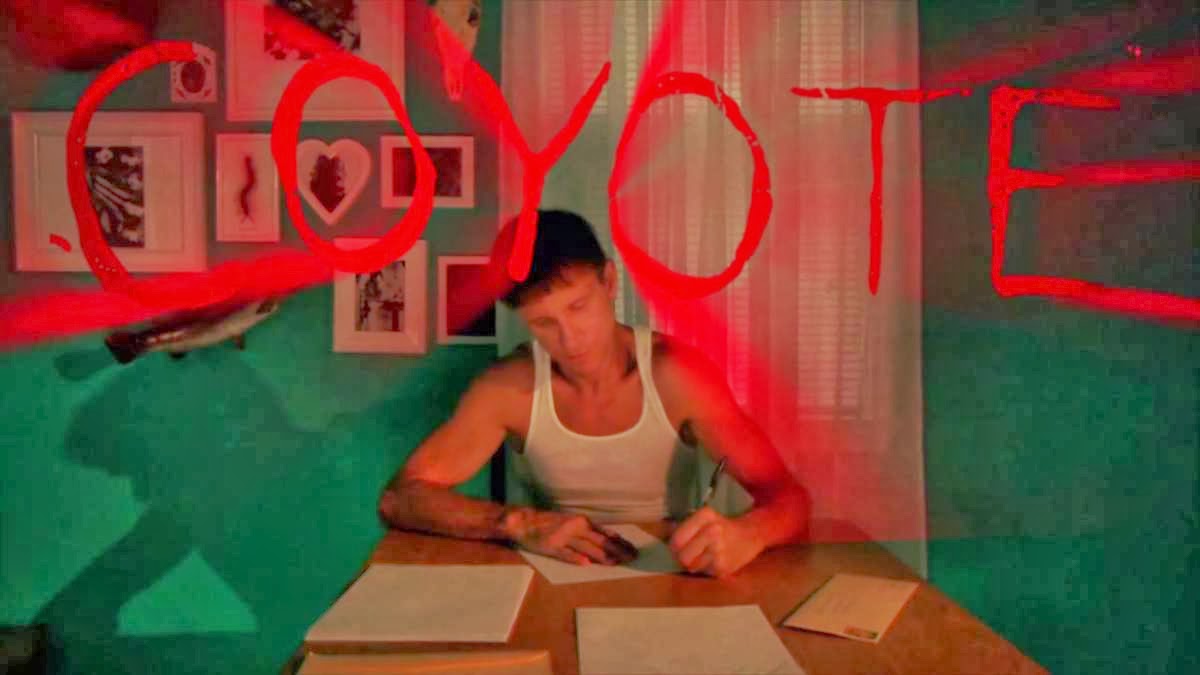 I have fallen far down the rabbit hole it seems. After watching the bizarre and uncomfortable 7th Day I was introduced to Coyote (directed by Trevor Juenger); a film in a similar vein, and one that seems somehow even more strange. Things like this it is hard to know what to make of, I must confess I spent a good deal of Coyote stressing about how I would actually approach reviewing it.

Bill Oberst Jr stars as Bill; a forty something loner, insomniac, and failed writer who has set out to be successful. He is somewhat mentally disturbed and due to constantly having nightmares about people killing him in his sleep he sees sleep as his enemy and does anything not to do it which likely helps his madness. At first working for a racist delivery guy Bill then gets a job at a local TV station where he hopes to conform and fit in. However with his deep issues it isn't long before he leaves all traces of sanity behind and sets out on a journey of bloodshed, violence and also self introspection. 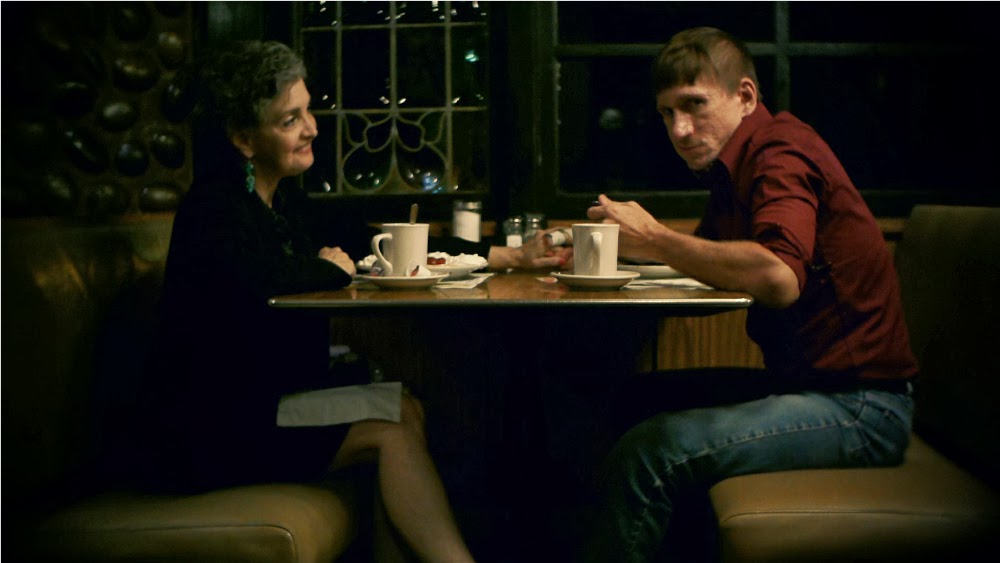 Coyote actually has many similarities to 7th Day, both feature psychopaths in lead roles, both films follow this main character around his day to day life, and both feature really strange, and unsettling behaviour which may or may not be real. Oberst Jr really delivers and has Bill come across as someone who is on the edge of revealing to the world his secret madness. The narration is fantastic, he has a voice made for this and his tone is just hypnotic, like a story teller. At a few points in the film small stories are told and these had me captivated. The character of Bill telling these tales makes sense with his writer background.

Special effects are really something else and gel so well into the hallucinations that Bill has. A videocamera with female private parts really evoked for me Videodrome with it's fusion of organic and mechanical bits, while the frequent sequences of Bill having an insect body hidden under his skin where quite icky and fit with his notion that something just isn't right with him and that could be the reason he just can't function in society. Insects feature a lot, usually in or around Bill, usually I hate insects in horror films as they can just be a lazy way to create fear, but their inclusion here not so much as it seemed to represent his squirming madness. 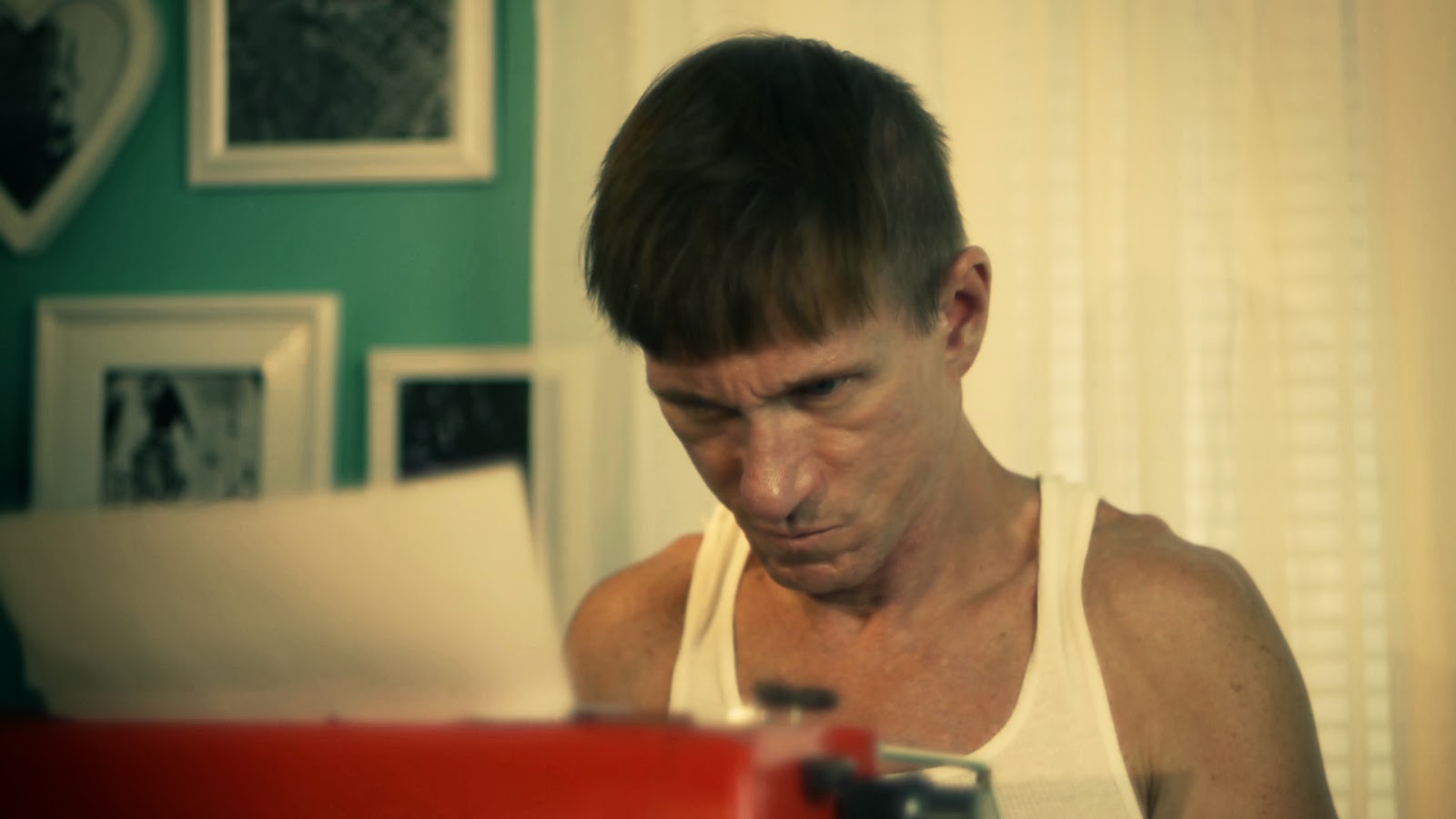 What I got from Coyote was how modern day living really can screw with the mind. Living in vast concrete coffins it seems only when Bill retreats to the woodland that he truly feels free to embrace just who he is. Returning for a fun sequence in which he wears a coyote skin hat while speaking Hamlet's famous 'to be or not to be' soliloquy from the Shakespeare play Hamlet (a speech which for reasons unknown I have had  burned into my memory for years now) and then a blistering end sequence.

Coyote is frequently violent, very gory, and an uncomfortable film to watch but also one I could not stop viewing, an interesting film which occasionally steps a little too much into arthouse territory but also delights with some of it's direction. I loved the 4th wall breaking moment when Bill acknowledges the cameraman filming the scene for instance. The images of wild dogs, the scenes repeated to play out in different ways, the brutality of it all is well done.

All in all I am glad I witnessed Coyote. The plot may be confusing and maybe even non existent, sometimes it may wander a little too far into extended shots of not much in particular, and it can never be called a fun ride what with being put into the head of a truly sick individual, but the direction means this acid trip gone bad never gets old and remains consistently engaging right up to the great end credits.

Thanks for taking a look at COYOTE. Enjoyed reading the review. I think Trevor Juenger is the real deal; a filmmaker who does not pander. COYOTE has been picked up for distribution by Wild Eye Releasing, with a release date pending.

Wish you all the best in the future

Yikes! Daniel, I am very sorry I typed your first name wrong! Doing these mentally disturbed roles must be eroding what's left of my mind. Thanks for being polite and not mentioning it, and for the review.

Nick Brian Walters aka Badfish the cinematographer of this film is a pedophile and is part of nefarious prank groups like PrankNet, Phone Losers of America and Prank Call Nation. Nick Walters forced an underage girl Lisa Deltbar aka Polkja into depression and psychological issues due to his repeated sexual abuse.