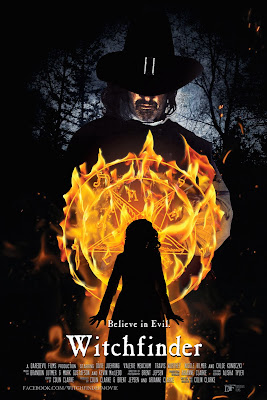 January seems to be the month for short films, the third one I have seen for review in just over a week. Witchfinder (written and directed by Colin Clarke) is a period piece that takes place during the American Witch hunts. While I have never seen the British horror classic Witchfinder General that is what immediately sprung to mind during the film.

William Thatcher Blake (Dave Juehring) is a witchfinder and the film starts with him interrupting a demonic ritual and capturing a suspected witch and her customer. Just before him and his men burn the witch at the stake she puts a curse onto Blake. Thinking nothing of it Blake carries out his duty and returns home to his family. In the middle of the night a strange noise awakens him and the terror begins... 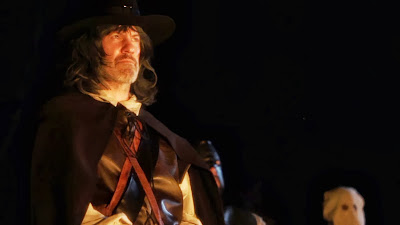 I was quite impressed with this short 18 minute film, it appears to have a budget with some great special effects used. Period pieces can live or die on their believability, Witchfinder succeeds with locations and costumes that form a cohesive whole. There is a 3 act structure here, the first act being the arrest of the witch, it starts the film well. The witch character had some slight over acting to her I felt, but she redeems herself later on anyway. The second act takes place out in the woods and has some decent special effects such as a nasty use of a spiked mask that made me wince. The final act takes place at Blake's family home. I felt this act to be slightly rushed and I did not think much of the ending yet the special effects in this sequence are the best of the whole piece, I almost got goosebumps.

Throughout Juehring is a strong lead, his costume makes him stand out and his acting is of a good standard, it would be great to see more of this character. The direction and lighting is used to great effect, especially the switch from the woods in night time to the grey of the woods in day which I found to be quite striking. 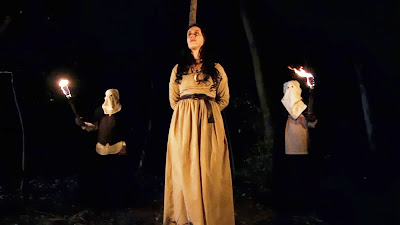 Overall my main complaint is that there just was not enough here, that is something I don't usually say about short films but in this instance I really found myself itching for more when the end credits rolled.