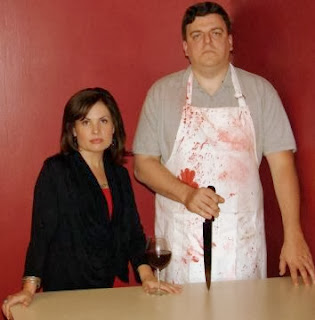 Secret Family Recipe is a short horror made by Get Coned Productions (also responsible for Self Storage), written and directed by Chris Durand. It is a far better made film than that one and has a better vein of black humour running through it. Minor spoilers ahead for those who can't see the twist from the title alone.

Anne (Lisa Arcaro) and Arthur (Chris Durand) seem like a typical American family. The film takes place on the day they are due to have a BBQ for their friends and neighbours. Their BBQ's are well known for the special type of meat used. It turns out quite soon into the piece that the meat is that of a family who have been kidnapped and are trussed up in the basement.

Immediately I was pleased with this film as it directly links itself to Self Storage by way of a radio news story. I love it when unrelated films get linked to each other (such as Eli Roth's Cabin Fever and 2001 Maniacs featuring an identical character). The husband and wife it has to be said are not the greatest actors in the world but as soon as it become apparent that this was not a film to be taken seriously the over acting became more acceptable. With low budget films such as this it is easier to be more forgiving with acting quality and least there is enthusiasm.

Partly a commentary on the American Government and the ills of capitalism it never becomes too preachy. The reason for the family's odd meat choice is down to increasing taxes and keeping the wife happy with expensive clothes and jewellery meaning it is just not affordable to buy regular meat. There is quite a lot of gore packed into the near 16 minute running time, some of the gore effects are quite effective such as a throat being slit, and implied threat (someone being beaten to death with a meat tenderiser just off camera) work well, the later especially due to the uncomfortable place they went to with that.

At first I found myself put off by the nasty family, yet by the end, especially with the later twist they came to be quite enjoyable and fun. Also loved how the surnames of people tie into the whole plot, made me smile. While the budget is not the highest (I swear a table in one scene was made out of cardboard) it is obvious the cast and crew had fun making this. Not a bad short, and a lot stuffed into the running time.