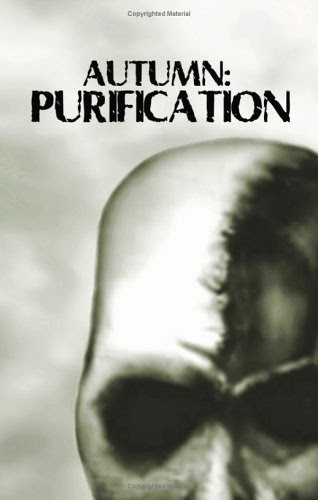 Now after a New Year break I have returned to The Rotting Zombie for another year of horror filled goodness. For my first blog post of 2014 I have chosen to review David Moody's third book in his fantastic Autumn series, Autumn: Purification. Needless to say there will be spoilers about previous books here, so really if you have yet to read an Autumn book then I would suggest avoiding this review.

Having reached the safety of a military bunker at the end of Autumn: The City, the survivors of the plague that wiped out mankind have finally gotten a small amount of breathing space. The soldiers of the bunker though have orders to clear out the thousands of undead on the surface. During this assault the army get over run and the bunker becomes breached. With no option but to run the immune survivors race head long into the zombie covered world they thought they had left behind, and there they finally find reason to hope...

While story wise this is almost a re-treading of The City (people needing to get from point A to point B) it is so much more exciting, especially as characters have been well established now so there is no introduction of a glut of new characters meaning the book gets off to a thrilling start (something that did affect The City slightly). The couple Michael and Emma give a reason to really care about their fates, while Cooper the ex soldier is as cool as ever here. It is true a whole host of new people show up later but of these there are some stand out ones (the two pilots in particular). Also two soldiers join the group, ones who are forced to wear their cumbersome bio suits due to not being immune. These two are wildly different and provide a real sense of hopelessness, they both know they are doomed; unable to eat or drink, knowing they have no future. A real hellish situation they are stuck in, and a unique aspect of this particular book.

The biggest problem I had with Purification was a small plot point. This is my second time reading it and I had totally forgotten that an explanation for the thing that wiped out most of humanity was given, an explanation that the more I think about the more it makes no sense. It bizarrely riles me up, though it is such an insignificant part of the book and isn't even confirmed as the real cause. Even the characters get on board and tell themselves (and me) that it is insignificant anyway and not worth dwelling on!

The zombies continue to evolve, slowly gaining more intelligence and awareness which has made me darn excited to see what happens next as the next few books in the series I have yet to ever read. There is lots of violence against them (even a human vs. zombie war at one point) and their massive numbers always create such a sense of hopelessness for the survivors.

As always I will sign off with the apology that I am no good at doing book reviews. Autumn: Purification is the best book in the series yet but would not recommend reading it before the previous two.