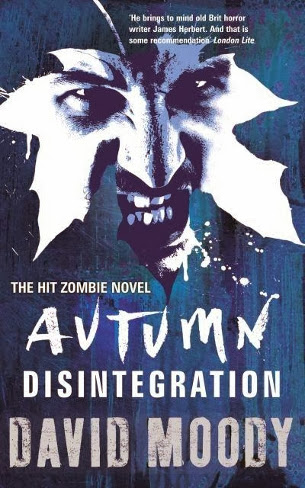 Autumn: Disintegration is the fourth book in David Moody's series of zombie novels. Originally written back in 2006 it never saw the light of day until 2011. With an already solid series could this one surpass the high bench mark? Mild spoilers ahead

Disintegration focuses on a whole new bunch of survivors of the virus which wiped out 99% of the worlds population. In contrast to before though these survivors are not content to lay around wallowing in self pity but instead are a surly lot. This bunch include a young offender, an alcoholic, a shirker, a crazy woman (who cradles a doll thinking it is her dead child) and more. Rather than try to hide from the zombie horde these go about their days making as much noise as they please, with frequent attacks on the ghouls. Nearby a different group of survivors hide, these see keeping silent the best way to survive, pretty soon the two disparate groups are brought together and must find a way to make their differing ideologies work.

This is by far the best book in the series, something I seem to say with each new book, yet it is true. Moody's writing seems leaps and bounds ahead of his earlier work, the new characters seem to have more personality and distinction between them, the descriptions of the dead far better detailed. With a focus on aggression the new group create some of the most violent scenes yet seen, there is an immense amount of zombie fighting going on here all told in vivid details. Often the group go out of there way to attack the undead, and some even seem to relish in it.

The two different groups are handled well and their differing beliefs are exemplified in the personification of these ideals. The first group see the zombies as an enemy to fight and defeat, Webb being the key member for this. He hates the undead, he enjoys working out his aggression on them seeing them as not even human anymore. The intelligence and strength advantage puts these above their enemy. The group who believe keeping silent and out of sight is the way to go is demonstrated in Martin. This second group fear the undead having hidden away since the start of the apocalypse, they would rather slowly starve to death than risk getting the attention of the innumerable corpse army. It is telling that two key events both originate from these two key characters later in the book.

There are some references to past books, and I found these to be cleverly done with it not being at first apparent, the book is well paced and features a fantastic ending which was so exciting to read that I could really picture it all in my head like it was actually happening. Also happens to feature my favourite line of the entire series to date:
"There's something about the end of the world, he thought, that makes everyone dress like complete f**king retards."
Actually made me laugh out loud in context. Some niggles come from the amount of noise that everyone does make. In the previous books it was found that noise, however small was enough to draw thousands upon thousands of zombies, the group at first living in a condemned council block of flats make all the noise they want, shouting, playing loud music, and yet they never seem to have a problem getting out and about when they wish, I guess this is down to the cadavers rapidly disintegrating bodies making them no problem to mow down. As always the zombies do not act traditional at all which is as ever a nice touch.

Where the previous books showed what would happen to normal folk in a zombie apocalypse Autumn: Disintegration shows what people on the lower side of the human spectrum would do. People who appear to have low intelligence, who bicker and fight constantly, but ones who are brave and not afraid to act. It all makes for a far more interesting story, and the best so far in the Autumn series.