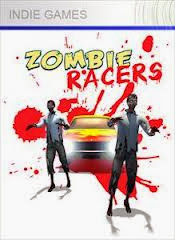 Wow, after expecting more utter trash I actually found a fun X-Box Indie game. Zombie Racers doesn't actually have you racing against zombies, it is more a race against time to mow down the undead beasts. Saying that though in the main game there are also races against other cars as well as the time attack mode.

No story to speak of, you are in a yellow car and must drive around the arenas running over zombies. You can get limited time power ups for your vehicle such as spinning blades (that stack up if you collect more than one of them) and a powerful zombie magnet that pulls all the ghouls towards your vehicle of death. 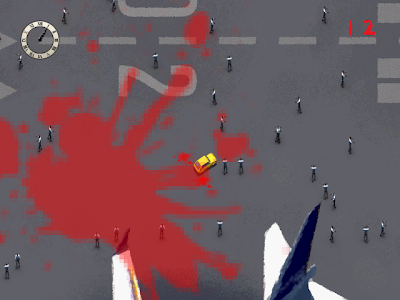 What I loved about Zombie Racers is the extreme over head view, your car is minuscule on screen, the zombies too very small. Every now and again a severed head, or limb will fly up towards the screen in a cool 3D effect, Played the demo as is the case but was a bunch of fun. The first arena was at an airport, while the second was on a beach. In between levels was a bonus one in which you are meant to avoid zombies. The car controls really loosely but works.

While Zombie Racers is an average game it still just shows that all you need to do is make something slightly different. Sure it has terrible rock music, barely any sound effects and looks quite basic but I had fun in the brief time I spent with it and that's the key thing.

Posted by Daniel Simmonds at 04:58