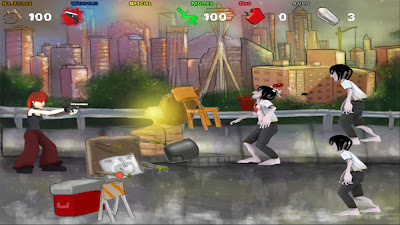 There Will Be Brains is a 2D side on view wave based zombie survival game, yet it beats the norm by having some interesting graphics, as well as plenty of fun story telling in-between levels.

Starting off in your home City in America during zombie apocalypse you get a message from your best friend in San Fransisco asking you to come rescue her. You decide you will, but first you have to get enough petrol to be able to make the journey. From behind your barricades you must take out the zombies, each day you survive you get more petrol. By the end of my time in the first city I had found a newspaper that spoke of a cure so when I left I was given a choice of where I wanted to go.

Starting off with a basic pistol you must stop the zombies from getting to your barricade and pulling it down. Some shuffle, some run, all can be killed via 6 shots to the head. After each round you visit a merchant (a parody of the merchant from Resident Evil 4) with which you can buy new melee weapons and guns to quicker take out the undead threat, or even save up to buy some petrol quickening up your departure.

There Will Be Brains is a fun game, the story after each round is incentive to continue, and the mellow chilled out music gives it the feel of a puzzle game almost. The graphics are charming and look different to anything I have seen before. I only played the demo (which was the first City) but have added it onto my list of games I want to buy, and so recommend it for anyone looking for a decent X-Box Indie game.

Posted by Daniel Simmonds at 02:36