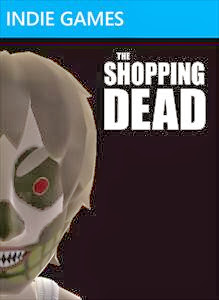 If there is one thing sure to send people running from The Rotting Zombie it is reviews of X-Box Indie games, the statistics prove it! Yet here I am once again, my masochistic urge to review the hundreds of zombie games on that cursed channel.

The Shopping Dead is a first person arena zombie slaying game. You are in a shopping centre and must survive waves of the undead. The undead and you are all Avatar based so I was wondering around with comedy over sized gloves on. The undead are basically Avatars with a slight horror tinge to their faces, not horror enough to actually resemble zombies mind. They groan when you shoot them, other than that they are spookily silent.

The zombies appear to warp into the arena via black doorways yet I never witnessed them doing this. Usually I would turn around to see a leering Avatombie standing there, silly really. When the zombies die they have no great death animation, they merely just instantly disappear. The gun I was armed with resembled a stapler, maybe it was a stapler, there was no information to the contrary that it was anything else.

The best thing I can say about The Shopping Dead is that it has a few different tunes. At around £2 it is not even the cheapest price it could be. Whoever made this needs a slap if they thought they were bringing anything new to the very over saturated zombie arena shooter genre.