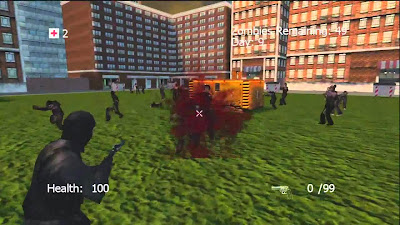 With a title like that I fully expected this game to be terrible, also I don't know if it is a unwritten rule or something but why is the cover art for nearly every single X-Box Indie game so abysmal? I couldn't actually find an image of the cover so I have saved you that pain!

Set in Britain during zombie apocalypse you play as a balaclava wearing man who each day is armed with a different weapon with which to take out the hordes of dead shuffling around in the square your based at. Each day has it's own little intro card and a set number of zombies to kill to survive the day.

In the demo I was able to play through 8 days, and I had a lot of fun. The $1.00 Zombie Game is a third person arena shooter but controls not badly and looks better than most Indie third person games on the channel (still hardly great graphics though). Rather than earning points from killing the undead to buy new weapons the idea of instead using a different weapon for every day feels somehow novel.

The undead look really strange and angular, but they are varied and they make cool groaning noises. Each level though all the zombies tend to bunch up, so you end up with a small horde after you rather than randomly placed bodies, this made it quite easy, but for each 7 days you survive the zombies strength and speed increases. The music is also not bad, such as one track that was a riff on the classic Funeral March tune.

For 65p you cannot complain about not getting value for money, is on the list of games I want to one day buy as I enjoyed the demo, just not sure how tough the game will ever get.