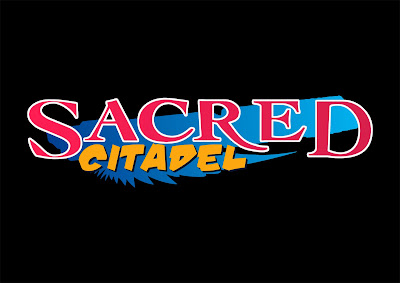 Sacred Citadel is a scrolling beat em up set in a fantasy land. You play as either a barbarian, archer, shaman, or mage fighting your way through 4 stages made up of around 6 levels each. What I didn't know until researching this is that Sacred Citadel is actually a prequel to Sacred 3, the Sacred series being RPG's.

The plot is standard fare, basically an evil being known as the Gatebreaker (something like that) requires two talismans to be able to get the power to attack a sacred Citadel were the protectors of good reside. It starts with the town your hero is drinking in coming under attack by a goblin army who have been hired to locate the talismans. During the adventure your character is tricked into locating the talismans him/herself and then betrayed leading you on a quest of revenge. 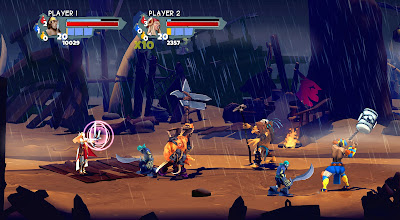 The best thing Sacred Citadel does is the variety it brings into it's levels. Each level has at least one kind of unique environmental device to it to spice things up and avoid too much repetition that can come from scrolling brawlers. So there are traps that can be triggered to take out enemies, pools of acid, vehicle sections where you can control a giant monster, or an armoured truck, and plenty of simple but fun jumps to do. Levels are based on fantasy tropes so you get castles, lava, ruins, goblin camps etc. Boss encounters are frequent but not all levels have them, and they are placed well, not always just plonked at the end of a level. Some quite epic ones, such as a large dragon on top of a giant tower but a lot of the time they are either larger versions of normal enemies, or once defeated then start appearing as normal enemies in subsequent stages.

There are a lot of enemy types that is good to see, each of the four acts have many different monsters to fight, a lot specific just to the levels you are in. Wolf type creatures in the forest, zombie ghost pirates by the lakes, and various other types. While some appear later reskinned and made tougher, for the most part new monsters keep getting introduced which I really appreciated. I also like how the game never runs out of ideas for how to introduce these. During a temple sequence cult members about to make a human sacrifice in the background leap into the game to fight you for example, while coming across a load of dead enemies I was surprised when a necromancer appeared and resurrected them for you to battle. 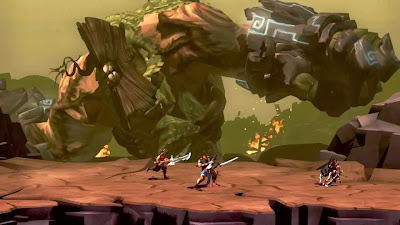 Combat is simple but fun enough, you have access to normal and powerful attacks while special moves can be used when your bar has filled up. Enemies drop lots of gold, and occasionally new weapons and armour to equip. XP levels you up that lets you put skill points into attack power, defence, special abilities, or critical hits. A lot of the time I did find it just a case of bunching the enemies up into a corner and then just pounding on them all until they died.

The music has a Golden Axe vibe to it but is just not varied enough, it seemed to me by the games end that pretty much the same tune had been used for the entire thing, it did get a bit repetitive, and the dub step on the title screen was funny but totally out of place in a fantasy game! Each stage has it's own town to visit to shop in, but these places are pretty boring to go through. I imagine in multiplayer this would be fun, but I had no trouble at all finishing this on my own, never died once thanks to food downed monsters drop, as well as a plentiful supply of health potions. The plot is also pretty dull, some nice voice work but still not interesting to watch. 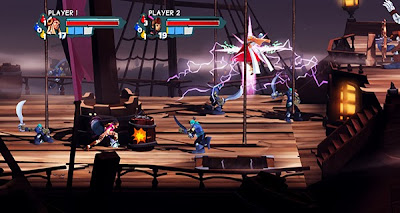 I had fun playing this, the cartoon art style was pleasing and made things look different. Not bad but not ground breaking, still I could see myself playing this again one day, maybe next time will do it with a friend.